A Review of Madeleine L’Engle’s A Wrinkle in Time: The Graphic Novel, adapted and illustrated by Hope Larson

I am always puzzled by people who dislike even a well-done adaptation of a book to film on the grounds that it doesn’t contain every bit of the book. A book and a film are two different formats, with a film clearly being a tighter format than a book. While I realize a graphic novel is a book in one’s hands, it is nevertheless limited in much the same way a film is by its visual elements and its very immediacy. (Ironically, the current move towards present-tense narratives in YA and even middle grade fiction can be seen as an effort to capture the immediacy of film.) 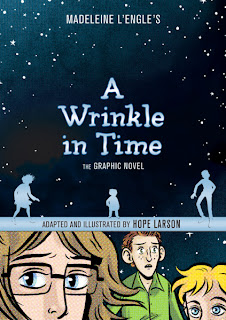 A graphic novel, even if it is an adaptation, must be understood as a compact narrative. I was wondering how well this famous, beloved book would translate to the graphic novel format… Of course, it depends on who is doing the translating. Hope Larson does a very, very good job.

I’m thinking of a contrast that highlights Larson’s effectiveness. Take the graphic novel of Twilight. Although I liked it on some levels, the choice to go with a manga style gives us really sweet-looking characters. I think it would have been more effective with a grittier style.

And there’s a certain sweetness to Hope Larson’s artwork for A Wrinkle in Time. Charles Wallace would be pretty darling if he weren’t scary smart. I wasn’t sure what to think of him in this book. You may not even realize you have a picture of what Meg looks like, or Calvin, or the three “witches,” until you see how Larson has envisioned them. For example, in Larson’s book, Calvin has a crooked nose. I checked in the original, and he doesn’t, not that the author indicates, anyway. So the nose threw me off a little, though I think the adapter-illustrator wanted to make Calvin more accessible, especially to Meg.

There’s a lot of handholding going on, with a light suggestion of romantic interest between Meg and Calvin. Actually, Larson makes the hand holding into a theme for Meg, and it does pop up on occasion in the original book. For example, when Meg goes back to save Charles Wallace, Mrs. Who says, “I ccannnott hholldd yyourr hanndd, chilldd.” And Charles Wallace is holding Meg’s hand tightly when they land in the broccoli patch after their escape. L’Engle is certainly wise enough to imply that Meg must grow up and act for herself, without having her hand held at the most terrifying moment of all. And Meg's love for Charles Wallace saves him, so that handholding makes sense. I do feel that Larson did more with the idea than L’Engle—see for yourself how you think it works. 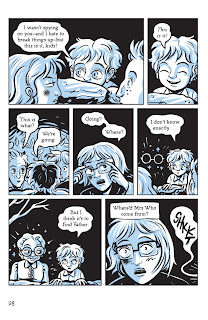 Now, one challenge of illustrating the story is that IT was always going to be more scary in the reader’s imagination than in an illustration—in fact, reading about IT without giggling is sometimes hard to do. It’s easy to make SNL-type jokes about a giant blob of brain sitting on a platform. But the story sweeps us along, and the brain isn’t that bad. In fact, Larson handles the problem by outright acknowledging the absurdity. On page 286, she sets up the coming visual of IT with a series of shots of Meg’s little crew reacting, looking a tad like McCauley Culkin in that famous Home Alone pose. Oh, the horror! Then on page 287 we get, “—a brain.” And Larson throws in some sound effects coupled with visual effects, all in voice bubbles: “Quiver.” “Glorp.” “Gurgle.” “Squish.” “Ooooooze.” After which we move immediately to Charles Wallace succumbing still more to IT, his eyeballs starting to twirl on page 288.

Any fan of the original Wrinkle in Time may have the movie adaptation reaction I mentioned above. But flex your thinking a little, and I suspect you’ll find that Hope Larson’s graphic novel does justice to L’Engle’s wonderful book.
Posted by KateCoombs at 6:08 AM

I loved Hope Larson's graphic novel. And I am a huge fan of L'Engle's book. I thought Larson did an excellent job adapting the book.

I'm interested in reading this even though I know my kneejerk reaction would be to oppose it on the pearl-clutching grounds that it wouldn't be exactly the same book as the original. I know that's a nonsense response though! And I do love Hope Larson's art.