A Review of Forest Has a Song by Amy Ludwig Vanderwater 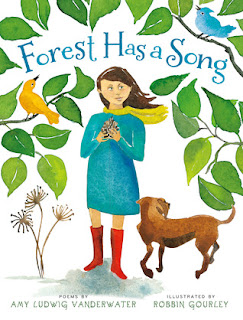 Today is a happy day. It’s the release date of Amy Ludwig Vanderwater’s first poetry collection. If you haven’t heard of Amy, you should. I first “met” her in the poetry blog community last April, when I followed her poems through National Poetry Month, one for each letter of the alphabet and a few bonus poems. Amy has a very friendly and poem-filled blog, The Poem Farm. She actually lives on a farm in New York, where I suspect she takes walks
through the woods.

We can join her in Forest Has a Song, which takes us on a walk through the forest and the
seasons with a girl and her dog. The book is illustrated in light-filled watercolors by Robbin Gourley. We begin with rows of leaves on the endpapers, then a view of a house with a path leading to the woods on the title page. The oft-overlooked credits spread is especially pretty—a row of weedy grass stalks on a sky-implying background. Of course, our true journey begins with “Invitation,” a poem that starts with the girl’s words and ends with the words of the forest itself. Here is the entire poem:

Today
I heard
a pinecone fall.
I smell
a spicy breeze.
I see
Forest
wildly waving
rows of
friendly trees.

This is a good example of poet Vanderwater’s voice, clean and spare and true. Our walk continues with a “Dead Branch,” a haiku stick thrown to the girl’s dog. Then we meet “Chickadee,” who is afraid of the girl but is nevertheless attracted to the seeds she offers. As in the first poem, the poet gives us the girl’s voice followed by the bird’s. “Forest News” is next, in which the girl sees the tracks left by animals as the words in a newspaper. News about different animals is described in flowing lines. A couple of my favorites are “Young raccoons/Drink sips of creek” and “Here a possum/whiskery-wild/climbs a tree trunk/with her child.” The poem concludes:

Scribbled hints
in footprints
tell about the day.
I stop to read
the Forest News
before it’s worn away.

Our girl walks on, having encounters with unfurling “ferny frondy fiddleheads” and a “grandfather fossil,” a trilobite, before moving on to a tree frog and a lady’s slipper. There’s a sly bit of fairy tale humor in having those two poems on the same page since Vanderwater’s frog is courting and the lady’s slipper is the one dropped by “Forest Cinderella.” The frog poem, “Proposal,” begins rather desperately with:

Marry me.
Please marry me.

Notice the combination of romance and absurdity, as in “Crooning” followed by “Plopping.”

The girl is having a picnic with her family on the next spread, giving us “Spider” and the lullaby-like “Dusk.” Then the two night poems are especially nice. “Lichens” ends with a wise little twist and “First Flight” tells the story of a young owl’s first flight: “Mommy, I’m scared to be this high.” After that we see the girl and her dog back in the forest on their own, exploring moss and a sad little pile of bones: “I wonder/who will bury you?” We get a taste of “Wintergreen,” a moment of deer watching (and vice versa), “Home” in a rotten log, and the “Puff” of mushrooms ready to loose their spores. A “Warning” about poison ivy and the sound of “Woodpecker” finish off the summer: “In a red cap/he types poems/with his beak/upon a tree.”

The girl is waiting for the school bus as “Maples in October” decide to turn red. “Squirrel” has secrets, but can he remember them? Then we reach the poem that gave the book its name, “Song.” The girl tells us about the sounds of the forest, concluding:

Forest has a song.

A page turn. Snow has fallen, and snowflakes have voices. “Father cardinal” shows off: “Dramatically/he makes an entrance/through two birches/at stage right.” Finally, Forest bids us “Farewell,” again evoking the “spicy breeze” we smelled in the poem that began the collection, “Invitation.” The girl and her dog walk home.

Gourley’s illustrations are deliberately fair and spare, making a good match to Vanderwater’s poetic style. The girl appears with her brown Everydog on most of the spreads, leading us on a rambling tour of the forest. We get to see her parents and her little brother once or twice, as well. The subjects of the poems are called out in the artwork, but they support the poems rather than competing with them. The cover art is particularly lovely, as you can see.

Listen to the entire text of the title poem and take a look at more images from the book in the book trailer. Forest Has a Song is recommended by no less a luminary than J. Patrick Lewis, Children’s Poet Laureate of the Unite States: “With her first book of children’s poetry, Ms. VanDerwater has already arrived.”

I don’t know about you, but here where I live, Spring is starting to show her face. What better time to take a walk in the woods?

Note: Thanks to Clarion Books for providing me with a review copy of Forest Has a Song.
Posted by KateCoombs at 6:02 AM

My book arrives today, & now you've made me impatient to have it! Amy is a gift to us all & I'm so happy she has created this lovely book. Thank you!

Indeed a happy day with Amy's first poetry book out in the world. Loved your review! :)

Oh, this is very lovely. I will add this book to my list.

Dear Kate, Thank you! I am grateful for your beautiful words here...it's an honor to have FOREST recommended by "Book Aunt", one of my favorite poets. I can't wait for your MONSTER SCHOOL! Happy almost Poetry Month! xo, a.

Thanks, Linda, Jama, and Lin--enjoy the book!

You are so very welcome, Amy. Hope you had a great day! EVERY month should be a Poetry Month. :)