March is here and spring is springing, at least in my town, where the three feet of snow in the front yard has finally melted and the sun is shining. It's time for kites and daffodils and some good middle grade books! 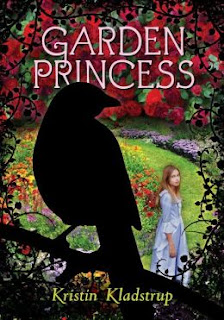 Princess Adela is a girl after my own heart. Well, she’s more enthusiastic about weeding than I am, but she loves gardening, as I do. Actually, Adela lives and breathes gardening, which worries her well-meaning stepmother. How will the princess ever find a husband with all that dirt under her fingernails? Then Garth the handsome gardener’s boy gets an invitation to a garden party from the mysterious Lady Hortensia, and he asks Adela to come with him so that she can help him follow proper etiquette. Adela’s pretty stepsister Marguerite gets an invitation, too. Adela can’t wait to see Lady Hortensia’s famous gardens.

Then we see Lady Hortensia in her garden, accompanied by a talking magpie named Krazo. It won’t take long for readers to realize that the lady is up to no good. Her plans for her party guests threaten to be self-serving, and she seems to know some magic, besides.

Sure enough, when Adela gets to the party, she finds out that Lady Hortensia is an evil enchantress (think Circe). Now everyone but Adela is under a spell, and she sneaks around trying to figure out what to do. But her friends are gone or have turned against her, and she can’t hide out forever.

The book is not very long, and the prose is clear and friendly. Here is Adela’s description of part of Lady Hortensia’s garden before the princess figures out that something is very wrong. At this point, Adela is wondering how the woman can have spring, summer, and fall flowers at the same time.

How different Hortensia’s garden was from the gardens at home! The palace gardens had wide-open lawns and terraces—broad bands of colors and texture. But this garden felt closed in and secret, with surprises at every turn. The roses were astonishing. They were all different from one another: damasks, centifolias, china roses, tea roses, musk roses, and ramblers and scramblers that threw themselves up and over the walls. The roses can’t have been moved from a greenhouse, Adela decided. Hortensia must have been cultivating them in the ground for years.

Garden Princess is a fun story that reads like an adventurous fairy tale. And there is a rather sweet romance. Adela is a kind and determined heroine, with Krazo—not Garth—playing the role of sidekick. I found the first three fourths to be a bit better than the last fourth, but all in all the book is a cheery, fast-paced read, with a beautiful if ominously enchanted garden that seems just right for spring.

A Tangle of Knots by Lisa Graff 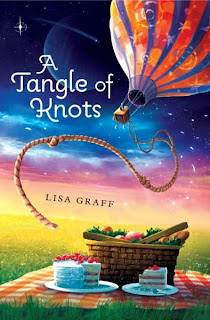 The world Graff creates is a lot like ours, except that many people have Talents—some great and some small. Cady has such a powerful gift for baking the perfect cake that she’s won the Sunshine Bakeoff every year since she was five. Cady lives in Miss Malory’s Home for Lost Girls, which is often practically empty because kindly Miss Malory has a Talent for finding orphans just the right homes. Miss Malory hasn’t been able to find the right home for Cady, but when a man named Toby shows up, it seems that will change.

Meanwhile, the Owner of the Lost Luggage Emporium is doing something uncanny to each of his customers and evidencing an unusual interest in a certain kind of powder blue suitcase. This will remind readers of the prologue, but what’s the connection?

At the same time, a girl named Marigold Asher tries and tries to find her Talent. She’s even jealous of her brother Zane, whose Talent is for spitting. We also encounter an old woman who has lost her memory and then the nurse who cares for her. We meet Marigold and Asher’s small brother Will, who apparently has a Talent for getting lost. Then there’s the man in the gray suit, who is more than a little magical and seems to be manipulating events.

All of these stories will touch each other. We learn at the end of Chapter 2 that six of the eight rooms above the Lost Luggage Emporium are for rent.

The Owner didn’t know it then, but in just one short week, all eight rooms would be filled. Some would be occupied by people with great Talents, others would not. One would house a thief, a person in possession of an object worth millions of dollars. Several would be inhabited by liars. But every last person would have something in common.
In just one short week, every last one of them would have lost the thing they treasured most in the world.

While the magical elements are well delineated, A Tangle of Knots reads more like magical realism than fantasy to me, that and a touch of Ray Bradbury. I am curious about the title. Certainly it speaks to the interconnectedness of people, especially the people in the book. But I’m not sure Graff wants to untangle the tangles or unknot the knots. I suspect she doesn’t even think that’s possible. Because don’t the knots hold people together even if life is often tangly? Graff’s book shows us that human kindness and connections are more important than talents or Talents. Her cast is fairly large, but she manages to imbue her characters with individual importance and nuance. A Tangle of Knots is a thoughtful new book for the magically minded middle grade reader. 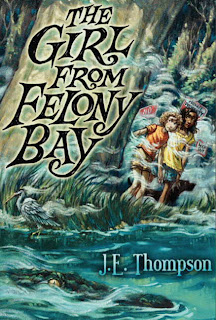 Abbey Force used to live on a beautiful old plantation in South Carolina, but her father has been injured and is in a coma. He is also accused of being a thief and has lost everything. Now Abbey lives with her Uncle Charlie and his wife. They’re an awful pair, and Charlie seems to have betrayed Abbey’s father in some way.

Determined to clear her father’s name, Abbey finds an unexpected ally in a girl who moves into Abbey’s old home, Reward Plantation. Here the author makes an interesting choice: newcomer Bee is also a Force, and she is African American. It is possible that Bee’s ancestors used to be slaves to Abbey’s ancestors. And now Bee lives in the manor house while Abbey lives in a little old broken-down place. Bee has been badly injured in a car accident and now walks with a cane.

Other players in this tale are a bully named Jimmy Simmons and his father, a pugnacious sheriff’s deputy, and a black boy named Skoogie who lives with his grandmother and is often a target for Jimmy’s bullying. We also meet some lawyers who were partners with Abbey's father at his law firm. Will they help Abbey with her quest?

As Abbey tries to find out more about what happened to her father, she stirs up trouble and uncovers mysterious doings in a part of the plantation named Felony Bay. But—the land isn’t part of Reward Plantation anymore. Why not? As Abbey and her friends get closer to the truth, they find themselves in serious danger. Let’s just say alligators are involved. But eventually the mystery is solved and Abbey finds her answers.

The sections about Abbey’s father are poignant, but Thompson is wise enough to handle them matter-of-factly. Here Abbey is visiting her father, talking to him in hopes that he will hear her and wake up.

I really did get straight As, but I hadn’t told Daddy that I was no longer going to Miss Walker’s School for Girls, I also hadn’t told him that Reward Plantation had been sold or that Timmy [her pony] had been sold or that I was living with Uncle Charlie and Ruth and pretty much hated every minute of it. Daddy had always raised me to tell the truth, but there was no way I could tell him the truth about my life. I was afraid if I told him what it was really like, he might never want to wake up.
I made up some happy stories about things I had done and places I had gone with old friends from Miss Walker’s, and when I couldn’t think of any more good lies to tell, I took out A Tale of Two Cities by Charles Dickens and went to my bookmark and started to read from where I had stopped the last time.

The Girl from Felony Bay is a well-written adventure story, a nice blend of friendships, mysterious goings-on, and peril in the swamps, not to mention treasure hunting and treachery. A satisfying read for the middle grade crowd.

Note: Thanks to Walden Pond Press for a review copy of this book.
Posted by KateCoombs at 2:03 PM

I really want to read A Tangle of Knots. It sounds like a good book.

I've been seeing A Tangle of Knots around too. It sounds good.

If you name a place "Felony Bay," you can't complain when treachery happens there. Just saying.

I thought Garden Princess was a fun cute story too. I haven't read the other two yet. Both are on the TBR...

All of these sound wonderful. I'll add them to my list.