A Review of Emily's Fortune by Phyllis Reynolds Naylor

If you're like me, you'll wish this book were a little longer. Of course, Phyllis Reynolds Naylor is a force to be reckoned with, often in rather serious stories, but here she goes for a good old-timey rollicking adventure of the "orphan heiress pursued by evil uncle" variety. I can't recall if the author included any actual moustache twirling, but she could have very easily. 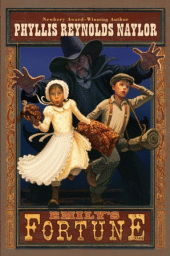 Naylor even has fun with conventions, ending every single chapter with a sentence or two printed in very large type of the kind used for posters in the Old West. These are oral tale-telling-style questions for the reader. Here are the first few:

*** But somebody else was on the way to Luella's big house! Now, who in the flippin' flapjacks could it be?
*** And who in creepin' creation do you suppose was in it?
*** ...where in tumblin' tarnation was Emily supposed to sleep?
*** And what in blinkin' bloomers do you think she saw?

That should give you a good idea about the tone of this book!

When Emily's mother and the wealthy woman she works for, Miss Nash, are killed in a carriage accident, Emily wants to go live with her father's kindly sister-in-law, Hildy, though she is more closely related to her awful Uncle Victor, who "had the silver-black hair of a wolf, the eyes of a weasel, the growl of a bear, and a tiger tattoo on his arm. He had a gold tooth that gleamed when he opened his mouth, and he could crack two walnuts in the palm of one hand just by squeezing his fist."

After Miss Catchum, the child catcher, comes around, the neighbor ladies help Emily onto a stagecoach heading for Aunt Hildy's home. She makes friends with a grubby orphan boy named Jackson, her first and only friend besides her small pet turtle, Rufus. But Emily doesn't know she has inherited Miss Nash's fortune, and pretty soon Uncle Victor is after her so he can get his mitts on the money.

Did I mention this book is rollicking? There's a lot of humor here—for instance, the only thing that seems to scare Emily's uncle is two flirtatious and over-painted spinster sisters who think he's manly. And the depiction of the stagecoach passengers is a hoot. Once Uncle Victor joins the road trip, you'll be holding your breath as a disguised Emily tries to keep from being recognized by him. It's only a matter of time before he catches on...

I enjoyed watching timid Emily become braver as she pursued her quest to get to Aunt Hildy's, helped along by Jackson's influence as well as her own delight in new skills like climbing trees. As I read, I was reminded of Sid Fleischman's style, also Avi's, in their humorous historical fiction. No huge surprises here, just a satisfying little story, an old-fashioned yet fast-moving stagecoach road trip, a melodrama with a hint of tall tale for almost any young reader.
Posted by Kate Coombs at 6:18 PM