My favorite thing about this book is that it gives us a girl who just isn't cut out to be what she is meant to be—a bog-witch. Young readers will snicker to read how Prunella longs for a wart or two, and for the ability to cast curses properly! Instead she has mixed-up magic and even a hearty dose of most un-witchlike compassion... 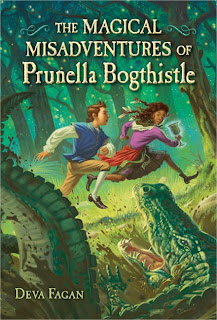 When Prunella catches a young thief named Barnaby in her garden, her attempts to curse him set him free instead. Whereupon Prunella's exasperated (and wise) witchy grandmother throws her out, so Prunella tags along with Barnaby, bickering happily with the human boy. For some reason he wants her to take the decorative chicken bone out of her hair. (Note that Prunella is dark-skinned, which is shown nicely in the cover art. Thank you, Henry Holt!)

Prunella and Barnaby both want to find the mysterious and terrifying Lord Blackthorn—Prunella to retrieve her great-great-grandmother's missing spell book and win her place with the bog-witches, Barnaby to find a magic chalice.

Fagan has a great time with her setting, giving us giant alligators (pets to the bog-witches) and slithery pondswaggles, not to mention a full-scale attack on a village by terrible creatures like toothy wights and spectral stallions.

Along with the author's creativity and humor, the growing friendship between Prunella and Barnaby is a plus in the book. These two characters do the Bogart-Hepburn thing remarkably well in a sort of pre-teen way.

"Prunella!" Barnaby hustled me along the road double-time until the boy had vanished behind the next hill. "Could you possibly try not to insult everyone we meet?"
"Me?" I tugged my arm free. "He was the one staring at me like I was a gobbet of mudwhelp slime. And did you see that talisman? I'm no wraith!"
Barnaby let out an exasperated breath. "You're the one who wants to walk around looking like the spawn of the pits. You can't blame him."
"I'm not putting on petticoats and a frilly cap just so some brainless donkey boy doesn't have a fit."
Barnaby rolled his eyes. "Wonderful. We aren't even inside the city gates and I'm regretting this...."

Of course, the Uplanders think the worst of Prunella, but she manages to grudgingly impress them right after they almost execute her. (The people have good reason to be touchy about magic, as the whole land seems to be cursed.) Meanwhile, Barnaby is being chased by a thief-taker named Rencevin, and we find out that the boy might not have told Prunella the truth about the Mirable Chalice. For that matter, what's up with Queen Serafine, and who is Lord Blackthorn, really?

Like Fagan's previous book, Fortune's Folly, this story gives us plenty of action, fun plot twists, and a very nice central character. Prunella may not be destined to become a bog-witch, exactly, but she's obviously meant to shake things up in this likable fantasy. And while the author wraps up her plot, she does leave room for a sequel. Fans of Patricia Wrede and E.D. Baker will be glad to discover this adventurous middle grade fantasy.

Here's a link to a review at Charlotte's Library. (You'll find that Charlotte and I are both in love with fantasy!) And look for an interview with Deva Fagan at the Enchanted Inkpot on June 23, 2010.
Posted by Kate Coombs at 6:26 PM