A Review of Bliss by Kathryn Littlewood 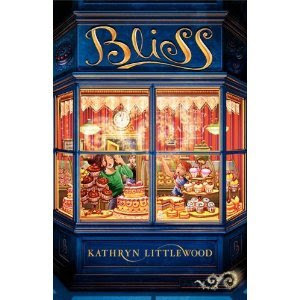 The Bliss family owns a magic bake shop in a small town. Not only are their baked goods extra yummy, but they can also act as magical solutions to problems. For example, Mrs. Bliss makes a special recipe to save a small boy who is in a coma after having been struck by lightning.

Bliss is written in the third person, but it is told almost entirely from the point of view of Rose, the Blisses' responsible, too-ordinary, too-plain, and slightly anxious 12-year-old daughter. She's the one entrusted with the whisk-shaped silver key to the magical vault when her parents are called out of town.

Littlewood has fun with her cast of characters. Rose's siblings include 15-year-old athlete and heartbreaker Ty, who's so full of himself and so adored by others that he hardly ever has to do a lick of work; 9-year-old Sage, who's a clown; and 3-year-old Leigh, who mostly makes messes. Rose is the only one in the family with dark hair, and she feels practically invisible—especially around her crush, Devin Stetson. We also get Chip, the laconic, tattooed muscleman who works in the bakery, and an elderly babysitter who smells weird and yells with a Scottish accent.

But the real star of this show is "Aunt" Lily, who shows up about five minutes after Rose's parents leave. It is so obvious that she has come to steal the Bliss family's magic cookbook that you may find yourself, as I did, telling Rose not to be a sucker for pages on end.

However. Lily is a bit more complicated than that. Yes, she's nefarious, and she has put some kind of spell on the kids so they won't tell their parents she is there when the elder Blisses call home.

But in addition to scheming, Lily is actually a lot of fun. In addition to being sneaky, she makes people feel good about themselves. She is charming with a capital C!

Rose and Ty run into trouble when they copy out some recipes from The Cookery Booke and experiment with them, hoping to show off to Lily without letting her into that vault.

A love potion and a truth potion cause all kinds of craziness in town, as does a backwards spell intended to reverse the previous spells.

Littlewood's humor shines brightest when she crosses over into parody, most notably when a dozen or so girls Ty has plied with both the love potion and the truth potion show up at the bakery looking for him. Until now, no one has done a Mean Girl quite like this one.

Out the backdoor, six rabid girls had pressed their flushed faces to the glass. More girls bounced on the trampoline, trying to get a look into the kitchen over the heads of the others. A girl stood on each of the swings—even the baby swing—and one brave girl had climbed on top of the rusty barbecue grate, ignoring the bits of burned hamburger stuck to the grill. Their eyes were bulging out of their heads, big as Ping-Pong balls.

This was scary stuff.

... Then a singular voice rose from the back of the crowd. "If he doesn't come out now, I will rip someone's face off!" One girl, taller and stronger than all the others, was hurtling toward the front of the crowd, throwing shorter girls to the ground as she passed them. That girl was Ashley Knob.

Her long hair had been curled into fancy ringlets so shiny and so blond that you had to squint to look at them directly. Her lip gloss shimmered like an expensive watch. Slung over one shoulder was a bag from which a frightened Chihuahua looked out, clearly wishing he were somewhere else. A ring of space opened up around her. Even in the depths of a spell, the girls of Calamity Falls always knew to make way for Ashley Knob.

Ashley screamed, banging on the window with her fists. "I will set all the furniture from my daddy's store on fire and throw it through this window!"

And that's just one of the results of Rose and Ty's baking!

Little by little, Lily hones in on the coveted cookbook, not to mention the magic ingredients kept in the secret cellar. One of the funniest things in the book is how Lily skewers the way Rose's parents use their magic, pointing out that their side of the family "[has] done nothing with [The Cookery Booke] but squander its power by running popular local businesses in small, eccentric towns." Most kids will miss the fact that Littlewood is sending up fantasy tropes, but older fantasy readers will no doubt enjoy the author's satirical moments.

The book gives us a couple of twists and turns before the Bliss parents come home, as well as a cliffhanger ending that sets readers up for a sequel. I am not a fan of such endings, but Bliss is nevertheless a clever, fun read for the middle grade crowd.

Note: I received an ARC of this book from HarperCollins. It will be coming out on February 14.
Posted by KateCoombs at 11:31 AM

Magical, problem solving food...if only it were possible. Sounds a bit like Sarah Addison Allen's Garden Spells, only for the young. I do love the cover art on this title!