A Review of Pie by Sarah Weeks

Alice's aunt Polly is the Pie Queen of Ipswitch, and when she dies, everyone in Ipswitch is upset. Not only was Polly such a nice person that she gave her pies away rather than selling them, but people were really hooked on her pies. Pie even amped up the town's economy. After all, Polly was a 13-time winner of the national pie contest, the Blueberry. (Someone else entered her pies.) And her shop, Pie, had become a real tourist attraction. 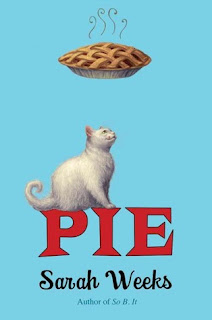 d because she was very close to her aunt. To her surprise, her aunt leaves her a legacy, her grouchy cat, Lardo. And she has left her award-winning pie crust recipe to Lardo!

Now half the town is baking pies, trying to win the Blueberry. Including Alice's mother, who has envied Polly for years and resented the fact that Polly didn't use her gifts to make a lot of money.

Alice is not interested in making pies. Her own talent is for songwriting. And now she is trying to get along with Lardo, not the world's sweetest feline. When Lardo disappears from her room, Alice worries that he has been catnapped.

With a town full of secrets and failed pie crust, Alice and Aunt Polly's shop assistant Charlie set out to play Nancy Drew and one of the Hardy Boys, respectively. Sure, Charlie is good at fixing Alice's uncooperative bicycle chain, but he makes a pretty good friend, too.

Alice is inclined to be self doubting, worrying about all the things she's said and done wrong. It will be clear to readers that what Polly most wanted to leave her niece was not a pie crust recipe; it was simple, everyday happiness.

But happiness seemed as far from Alice's reach as the disappearing pies in her dream. She lay in bed wondering if things would ever change, and that's when she remembered something her aunt Polly had once told her.

"Things do not change; we do."

"Did you make that up?" Alice had asked.

"No, a man named Henry David Thoreau said it. Do you understand what it means?"

"If you want things to be different, you have to start by changing yourself."

Of course, Alice, being a self-doubter, takes this memory the wrong way and decides she should change everything about herself. Stuff like her singing, her imagination, and her hunches. Readers will be quick to realize that Alice's new goal is not a wise one. Sure enough, a few pages and a peach pie later, Alice gets it right. Other characters also grow and change, replacing old perspectives with new ones.

This is a fairly slim book, a cheerful, unintimidating story of adventure and friendship—and pie.
Posted by KateCoombs at 11:36 AM

I love that you put this on here! Especially the quotes.
Btw I passed along to you an award as a blogger
http://shesgotbooksonhermind.blogspot.com/2012/01/versatile-blog-award.html

This sounds like a great story! Thanks for sharing! : )

I love this book

I'm doing it 4 my book report and I'm happy I'm finally gonna LOVE a book report book for once!

Anonymous--It's so much easier to do a book report when you love the book!

this is a amazing summary great writing! this made my book report so much easier! but of course I read the book and it was amazing.