A Review of Fortune’s Folly by Deva Fagan

My favorite character in this book is Fate—or perhaps Dame Fortune, as the title would imply. In a near-Shakespearian convolution, author Deva Fagan has her main character, Nata (short for Fortunata) make a prophecy, then scramble to bring the prophecy to pass, thinking guiltily all the while that she is a cheat and a fake. But Nata’s father—and the reader—will be inclined to believe that the fortune Nata tells is true, and that her desperate efforts are part and parcel of Fate’s plans for the girl. 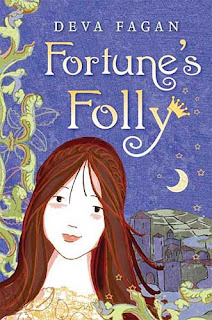 Nata’s adventures begin while she is trying to sell some of her father the shoemaker’s hideous shoes. Ever since her mother died, he has been incapable of making the once-glorious shoes he was known for. (There’s a nod to the story of “The Elves and the Shoemaker” in this part of the narrative, the first of several fairy tale allusions.) Nata tangles with the diabolical Captain Niccolo, winning in the short term but losing in the long term. She concludes that she had better leave the city before the man exacts some kind of revenge against her. And indeed, we haven’t seen the last of Captain Niccolo.

While on the road, Nata and her father fall into the clutches of another villain, a traveling con artist and player named Ubaldo who brazenly steals Nata’s donkey and forces her to work for him. Unfortunately, Nata’s father is ill, so she goes along with Ubaldo’s injustice in order to protect him. She also befriends Ubaldo’s fortune-teller, Allessandra, who offers to teach the girl her trade.

A third villain is yet to be encountered—or rather, villainess. After Allessandra escapes, Ubaldo forces Nata to tell fortunes for him. When they reach Domo, he brings Nata to the queen, who is searching for a true fortune-teller to create a royal prophecy and quest for her son, Prince Leonato. But the queen’s sister Donata is manipulating events so that the prince will fail and she can take control of the kingdom. Soon Nata and handsome stutterer Leonato are launched on a quest involving a sword in a stone, a missing jeweled slipper, the defeat of a witch, and the rescue of a princess of Sirenza. Of course, most of these tasks are nearly impossible, and the prince’s aunt is working to assure that he fails no matter what. If he does fail, Nata’s father will be executed.

I liked watching Nata’s behind-the-scenes attempts to ensure the prince’s success. Since he seemed to be falling in love with her, I was especially curious to find out how she could turn into a princess of Sirenza—especially after a fair-haired princess who appeared to be the real deal was discovered languishing in a tower.

At first glance, it might seem that the author of Fortune’s Folly is telling us we are at the mercy of our fates. In light of Nata’s hard work, however, it seems more likely Fagan is suggesting that our best efforts will make our fates. This is a very fun story, not to mention an auspicious beginning for Deva Fagan’s career as a children’s fantasy writer. I do recommend you join Nata on her journey. Then the next time you order Chinese food and read the little fortune inside, you can decide if you want to invest yourself in the hard work of making it come true.

Note for Worried Parents: Ubaldo and his virtual enslavement of Allessandra and Nata are a little scary. For most kids, it’ll be like a lot of what they see on TV, but if your child is on the young end of the book’s 9- to 12-year-old range or is easily spooked, you might want to wait a year or two for this one.