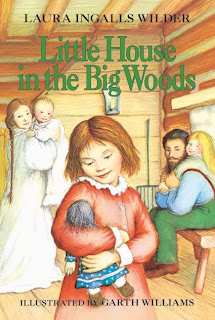 For those of you who love Laura Ingalls Wilder's books, you might enjoy taking a look at this site, Beyond Little House, which I learned about from Barbara Bietz over in Kidlitosphere. Yes, a group of hardcore Little House fans are going to hold an event called LauraPalooza next July in Mankato, Minnesota. There's even a call for papers--a call issued, of course, on Laura and Almanzo's wedding anniversary. Somehow, I suspect the Laura event will be accompanied by taffy instead of pot, calico instead of tie-dye, fiddles instead of electric guitars... Which just goes to show: children's book people know how to party!
Posted by Kate Coombs at 7:55 PM

Mankato is also the basis for Maude Hart Lovelace's Deep Valley in the Betsy-Tacy series. Is there a connection?

Next there will be ley lines discovered there and a new teen paranormal book series... ;)

A message from the Eastern Time Zone before I go get ready for an early meeting: my Poetry Friday post highlights a book called Poetry Tastes Like Chocolate. It's here: http://readingyear.blogspot.com/2009/08/poetry-friday.html

Happy Friday! Thanks for hosting! Enjoy your sleep for a few more hours!

Hi Kate--I'm here for Poetry Friday. First up are a couple of poems with a bit of commentary from David L. Harrison (Flea and Louse, both from Bugs).

And I've also got this week's 15 Words or Less poems based on a cool NASA pic of a flower, a slice of aerogel, and a flame.

This looks like a very exciting event for Little House lovers. I am particularly interested to hear what folks have to say about racism in the books. It's a sticky wicket for me, since I loved the books growing up but some parts really bother me now.

I think you are hosting Friday Poetry this week, correct? My post is an original back to school poem here. Thanks for doing the round up!

Thanks for hosting Poetry Friday today. I posted The Lion and the Unicorn at Bildungsroman.

So sad that karla Kuskin dies. Loved her work! Here is my contribution: http://maclibrary.edublogs.org/2009/08/28/poetry-friday-back-to-school/

Mankato is also the basis for Maude Hart Lovelace's Deep Valley in the Betsy-Tacy series. Is there a connection?

Not really. The books are written by different authors (of course), and are about different characters. I believe the only resemblance is that they are both set in or near Mankato. (Betsy-Tacy was actually IN Mankato, while the Little House books were set in Walnut Grove and Mankato was a neighboring town that they visited occasionally.) It's been a while since I've read both series, though, so I may be wrong. I did find this, which explains the connection a bit and also talks about Mankato:
http://www.beyondlittlehouse.com/?p=672