A Review of The Immortal Fire by Anne Ursu

While Rick Riordan's Percy Jackson and the Olympians series has been selling like crazy, you may have missed another series about contemporary kids and Greek gods, Anne Ursu's Cronus Chronicles. Book One, The Shadow Thieves, came out about six months after Riordan's first book about Percy Jackson, The Lightning Thief, suggesting once again that certain themes float into different authors' psyches at around the same time. Yet Ursu's trilogy has been overshadowed by Riordan's five books. Today I'm looking at Ursu's series wrap-up, Immortal Fire, but I definitely recommend all three books. I think they're just as good as Riordan's, and they have the advantage of a clever tongue-in-cheek tone.

Quick overview: In The Shadow Thieves, Charlotte and her cousin Zee stop a plot by a demon grandson of Poseidon, Philonecron, to take over the Underworld using the shadows of children as an army. Unfortunately, having their shadows stolen makes human children sick. Even more unfortunately, Zee is the unwitting conduit for this endeavor. But he and Charlotte fight back, and they are able to thwart Philonecron's dastardly plans. 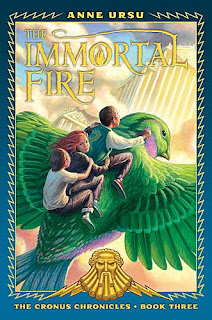 Still, family is family, and Book Two, The Siren Song, finds Poseidon responding to his grandson's request for vengeance against the two mortal children who have dishonored him. What's more, Charlotte is up against something not often seen in children's fantasy books, which is that her parents freak out about her long absence to save the world. Naturally, they don't believe her crazy story; instead they ground her and make appointments with a child psychologist.

When her family wins a cruise soon afterward, it doesn't occur to Charlotte that she is being set up for Poseidon's wrath to crash down on her head like a tsunami. And Zee finds himself in the unenviable position of being even more of a pawn for Philonecron than before. After some wild adventures on the cruise ship, which is mysteriously transported to the Mediterranean Sea, Charlotte and Zee eventually manage to prevail yet again. Siren Song is my favorite of the three books, if only because of Ursu's depiction of Poseidon as the tacky blue-skinned, gold chain-wearing owner of a luxury boat he has plastered with portraits of himself. (Come to think of it, her portrayal of all of the fallible Greek pantheon is pretty amusing!)

I noticed that The Immortal Fire drags in a few spots, but Ursu ultimately comes through, wrapping up the trilogy with dash and humor. Charlotte and Zee's mentor, Mr. Metos, who is a member of a secret society called the Prometheans, doesn't take the two kids seriously enough, considering all they've accomplished. When the Chimera burns down the middle school and snatches Charlotte, Mr. Metos begins to pay a little more attention. Such strange things are happening in the Mediterranean that they're making the TV news, yet no one figures out that Philonecron is back in action, having gotten his hands on Poseidon's trident.

This time, Philonecron is gunning for Zeus and mastery of the entire universe, and he's going to use his arch nemesis Charlotte to help him do it. One of the funniest things about these books is the way the author stops every so often to show us just what's going on in this towering narcissist's head. (I suspect Phil is secretly Ursu's favorite character!) Here's a passage in which Philonecron is planning world domination, but still worrying about thirteen-year-old Charlotte Mielswetzski, who has already foiled his schemes twice:

He was a hero, this was a hero's journey, an epic for the ages—the saga of a humble demon's long journey from Underworld garbage collector to Supreme Lord of All Creation.... but every hero had a nemesis, one as terrible as he was great. It was only literary....

Was she still out there, lurking in her vile little lair, clad in an item from her relentless series of discount casual wear, plotting her next move in her eternal quest to ruin his life? What if—it was absurd, but bear with him—what if at his moment of triumph, when Zeus was on his knees quavering in front of the trident, weeping and pleading, what if the little mortal monster appeared—because that was what she did, she appeared, and ruined everything? What if, just as he was about to get what he most wanted, she came, grabbed his beautiful dream with her sticky little hands, and stomped on it with her squeaky rubber soles?

Naturally, Charlotte will appear. Charlotte is ordinary and grubby and kind of cranky, but above all she is tenacious. Before she can confront the vain villain, however, she and Zee will have to save an angry teenager named Steve from the misguided Prometheans and find their way to Greece, where breaking into Mt. Olympus is just a little harder than it sounds. As the book progresses, Ursu works in themes like self-sacrifice and love, having social outsider Charlotte bely her own cynicism and Zee make an unthinkable choice, but most of all, The Immortal Fire, like its two predecessors, is just a funny, off-the-wall ride.
Posted by Kate Coombs at 11:55 PM

it was a pretty cool series. i wish there was a forth book though. if you liked this series i would recomend the Leven Thumps, and Percy Jackson series.They are both good fantasy book that are good for the ages 10-13