A Review of Silvertongue by Charlie Fletcher

A few years ago, I gave Charlie Fletcher's book, Stoneheart, a glowing review on Amazon. Today I finished reading Silvertongue, the final book in his trilogy, and now I can recommend all three to you.
Fletcher's Stoneheart Trilogy is one of the most original fantasy series in print. The author envisions a boy named George angrily breaking a piece off of a stone dragon at a London museum when he is unfairly punished during a field trip. Suddenly a carved pterodactyl sleeks into life and begins to chase him, and then everything changes as George sidesteps into a just-parallel city in which all of the statues are alive.
Fletcher takes this premise to a thoroughly satisfying extreme, making actual statues placed around modern-day London into characters. In a further twist, statues that look like humans are called spits and are reliable, while inhuman statues such as gargoyles and abstract modern sculptures are called taints and are dangerous. George turns out to be a maker, a kind of magical stoneworker, and he has inadvertently unleashed chaos by breaking off the dragon's head.
George is not alone, however; he soon enlists the aid of a statue of a World War I soldier named the Gunner and one other human, a glint named Edie who also carries a form of magic. Edie is a flawed and angry girl, half-mad with the burden of her unusual gift: when she touches something, she can see its past, no matter how violent and heart-wrenching that might be. Edie's personal struggle and evolution throughout the trilogy are especially well drawn.
The chief villain of the trilogy is a deathless man named Walker who brings darkness wherever he goes and has enslaved one of Odin's ravens, Memory, to be his spy. Walker has also destroyed numerous glints over the years in order to steal their magic, as we learn in Book Two, 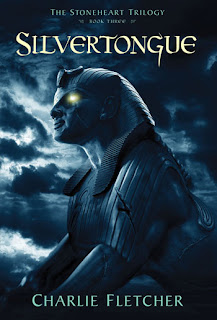 Ironhand. In defeating Walker at the end of Ironhand, Edie and George unfortunately unleash another terror on the city. And Walker is not gone forever.
The Clockmaker, Dictionary, Queen Boadicea, the Black Friar, Ariel, Little Tragedy, the Temple Bar Dragon, George's lone pet gargoyle, and numerous soldiers and statesmen made of bronze and stone, along with ghastly creatures like the Minotaur: frankly, it will astonish you just how many intriguing characters the author can create using the statues and sculptures of a modern-day metropolis. Of special interest are twin Sphinxes who act as oracles and end up representing the two sides in the battle for London. Based on their obscure, prophetic riddles, George and Edie attempt to fulfill the conditions needed to defeat their unworldly enemies—although Edie is distracted by her quest to find out what really happened to her mother. For his part, as he heads for a final showdown, George must cope with a stone vein beginning in his hand and slowly turning his arm to marble, then creeping inexorably toward his heart.
Fletcher is adept at fight scenes, and as the war between the dark and the light escalates in the third and final book, we get page after page of battles. I'm amazed that he can write so many of them and still do something different and involving every time. The aerial battles are particularly stunning. This is from a scene in which George is riding in Queen Boadicea's chariot when he is attacked from the air by two gryphons:

"No!" he shouted, and without time to reverse the spear in his hands, slammed the blunt end of the haft into the back of its neck with all the strength he could muster. It squawked in outrage and turned to snap at him. He pulled back the spear haft and punched it into the gaping beak, right down the throat of the creature. Then he swiveled violently, pitchforking the gagging taint off the back of the chariot. It hit its partner just as it swooped in to the rescue, and the two gryphons were, for a moment, a whirling, snapping ball of ice and stone as they tried to disentangle from each other, before depth-charging into the snow in a great cloud of powder.

In tone, Fletcher's trilogy is most comparable to Garth Nix's Keys of the Kingdom series—dark and strange and sometimes unnerving. I've noticed that Rick Riordan's Lightning Thief and its sequels have a cheery tone comparable to early Harry Potter, even in the face of danger. In fact, the danger never seems quite as dangerous as it's made out to be. Fletcher's books are more ominous, like the later volumes of J.K. Rowling's iconic series.
These are books for kids who love danger and fantasy combat; they are also well suited for intense readers. The Stoneheart Trilogy is just so surreal—other than George and Edie and some homeless people mindlessly enlisted as eyes for the enemy, the human Londoners have no idea what's going on. In Silvertongue, the rest of humanity fades away altogether as London shifts out of Time and is covered with snow. Only George and Edie are left to inhabit the bleak landscape, together with a legion of utterly odd carved and cast characters pulled from a myriad of plinths across one of the world's great cities.
Note for Worried Parents: The Stoneheart Trilogy is quite dark and contains some frightening details. I'd say the books are appropriate for the same kids who are okay with Neil Gaiman's Coraline and The Graveyard Book.
Posted by Kate Coombs at 11:32 PM

Did you hear Robert Zemeckis is going to make the trilogy into a movie, Stoneheart will come out in 2012, followed by Ironhand and Silvertongue. It should be great Zemeckis will be able to bring stone to life for sure.

Oh, that's wonderful! These will make great movies, and Zemeckis is unlikely to muck it up. I do know Fletcher started out as a screenwriter, but I think he's a much better prose writer than most of the other screenwriters who've made the switch to writing for children in recent years. Thanks for the info!

I finished Stoneheart and I'm half way through Ironhand. This series just gets better and better. I've been obsessively googling to find all the statues.

BookMoot--Isn't it great? I've read them all! Good idea to look up the statues; I love that he takes real statues and turns them into valid characters for the books. The author is really nice, too. He liked my Amazon review and wrote to thank me!