A Review of The Blue Shoe by Roderick Townley 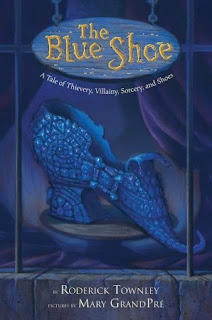 The Blue Shoe begins with a single entrancing and mysterious shoe. Then a boy named Hap is caught stealing and nearly sentenced to exile on terrible Mount Xexnax, except that kind-hearted cobbler Grel intervenes and takes him on as an apprentice. The cost? Grel must make free shoes for the greedy mayor's wife for the rest of her life. Or, as he sweetly points out, the rest of his life!

The cobbler has a secret. One night a stranger came to him and asked him to make a very special shoe, giving him a set of odd dimensions and a bagful of gleaming sapphires and even a blue diamond to use for decorating it. Grel completes the shoe—his masterpiece—and hides it, but the stranger never comes back. Eventually the townspeople find out about the shoe, which leads to trouble.

Now, the reason Hap became a thief at all is because in the village of Aplanap, begging is not allowed. Beggars are punished by being sent to Mount Xexnax. Hap's own father has been sent there. So when he sees an odd young girl begging, he tries to stop her for her own protection. First he gives her food; later, when she is thrown in jail, he trades a jewel stolen from his master's blue shoe to save her. But Hap ends up being sent to Xexnax himself, accompanied by a determined girl named Sophia.

Xexnax turns out to be a prison camp with a mine, where prisoners and a captive group of dwarf-like beings called Aukis dig ever deeper, seeking the mythical blue stones. Evil Mr. Slag runs the camp, in cahoots with the mayor of Aplanap, who is just as greedy as his wife. But Hap has other things on his mind. He believes that somewhere in the camp, he will find his father.

Did I mention that The Blue Shoe is something of a morality tale? The village of Aplanap, formerly a pretty place, is soon being punished for their mistreatment of the poor. It seems the hand of a goddess is involved. And the prisoners are about to rebel...

One of the nicest thing about the book is Hap, who is an appealing main character, a determined boy who focuses on the things that really matter in spite of all the chaos going on around him. The blue shoe itself is also intriguing, practically another character.

However, I liked The Blue Shoe a lot more during the first half, before Hap is sent to Mount Xexnax. Once Hap gets to the prison camp and down in the mines, this book starts feeling like Hogan's Heroes, only without the jokes. And the story's ending is a scattered mix of comeuppance and deus ex machina. Fast-paced enough to be fairly entertaining, The Blue Shoe is not a bad read, but it's not going at the top of my list, either.
Posted by Kate Coombs at 10:15 AM

That sounds like it's rather up my alley...I'll look for it!

Sounds like an interesting read that might appeal to a couple of my books club kids. Will check it out, thanks!

Deb--Yeah, it's a fun read! Looking back, I'm afraid I was a bit hard on this one.