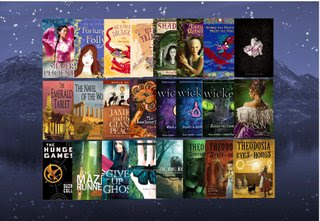 Eep! Forgot to tell you about this! Okay, I belong to a fantasy writers' blog called Enchanted Inkpot, and we are currently doing a major giveaway where you can win, not one, but eight books at a time. This photo shows the selections, including my two Runaway books. Each row is a gift basket, with three baskets in total. (And each one has a theme of sorts.)

But you have to link over there and comment at the very least to have a chance at winning. The grand prize winner gets first pick of the baskets and a gift certificate to a bookstore, too. To win that, you also have to twitter/blog/post on Facebook about the contest. Second prize is similar, but third prize is simply a drawing based on comment participation. So if you're interested, link on over and have at it!

Update: This contest ended December 9, 2009, and the winners have been posted.
Posted by Kate Coombs at 9:56 PM