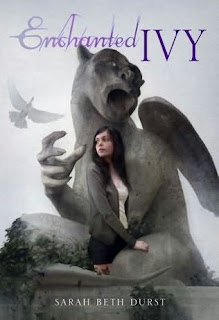 Three YA books with fairies, goblins, and other legendary creatures. In each one, a girl learns about her magical heritage and must decide where to go from there. Apparently, the best use of an otherworldly heritage is to save somebody, whether it be fairies, a kidnapped father, or a king.

Enchanted Ivy by Sarah Beth Durst—In this paean to the Princeton campus, high school junior Ivy strives for early admission by going on what turns out to be a fairy-linked scavenger hunt. She's not even sure what she's looking for and at first wonders if she's losing her mind, since magic is the last thing she believes in. But maybe there's another explanation for her mother's mental illness, and maverick boy Tye with his tiger-striped hair is awfully cute. Of course, so is preppy nice guy Jake. Ivy finds herself in the middle of a war between the fairies and the supposed guardians on the human side, discovering her true heritage and purpose along the way. A fun read if you've been enjoying the recent crop of teen fantasy romances. Durst's use of the campus gargoyles is especially memorable (see cover art). This teen book has a bit of an ick factor when you find out what the bad guys have been doing to the fairies; otherwise only medium dark. I should note that Durst's vision of Princeton is so magical that the fairy realm seems dull by comparison! 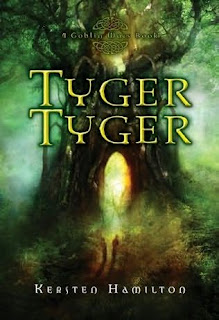 Tyger Tyger by Kersten Hamilton—Hmm, more fairy wars! Only here the fairy folk are all called goblins, so this book is the start of the Goblin Wars series. Teagan Wylltson's best friend Abby has been having dreams of trouble for Tea. Then Teagan's bad boy "cousin" Finn Mac Cumhaill comes to stay and she feels that absolute soulmate zing, though she tries to ignore it. Pretty soon Teagan begins seeing some very unpleasant otherworldly creatures, like the hideous and sly cat-sídhe. Her life goes downhill rather quickly as her mother dies and her father disappears. Next an awful social worker comes sniffing around. With some help from Finn's grandmother, Tea and her magically musical little brother Aiden, along with Finn, enter the goblin realm to find Teagan's father. Apparently the worst of the goblins, Fear Doirich, long ago cursed Teagan's family and now takes a special, malevolent interest in the Wylltson children. This book is a dark YA fantasy with a promise of romance to come. Has a few plot bumps, but intriguing secondary characters, an appropriately shiver-inducing rendering of the goblins and their world, and a very nice use of music. 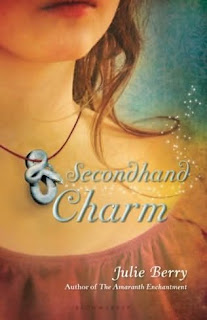 Secondhand Charm by Julie Berry—If you liked The Amaranth Enchantment, try this author's latest, in which a girl discovers her heritage in relation to a strange sea creature, the size-changing leviathan. Given a scholarship by the handsome king, Evie leaves her village and sets out for the capitol with her friend Prissy and the boy next door, Aiden, who would like to be more than friends if Evie will let him. After being waylaid by bandits, Evie makes her way to the palace, where her plans to study medicine are put on hold as she unexpectedly becomes the attendant to the foreign princess who is betrothed to the king. But a shipwreck during the journey has given Evie a new knowledge of who she is, and she discovers that Princess Annalise has similar secrets. When Evie suddenly finds herself embroiled in a plot against the king and his kingdom, she must use her new abilities to save them. Another book for teens, this one reads like an older MG. A fairly cheerful tale with solid girl appeal. Readers who like animals and pets will enjoy watching Evie get used to her slithery-sweet new companion as she saves the day. (Check out an interview with Julie Berry at Gamila's Book Review.)
Posted by Kate Coombs at 10:00 AM