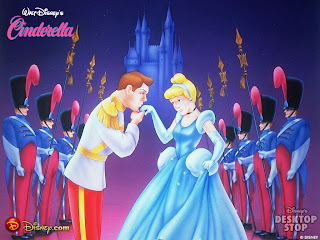 I've posted here about the demise of the picture book fairy tale or folktale, and I'm not the only one who's commented on the trend. Now Disney, the great princess profiteer, is joining the club with an announced determination not to make any more movies based on fairy tales. It's the end of an era, as well as a reflection of trends in children's literature. The L.A. Times article reads in part:

So why has the clock struck midnight for Disney's fairy tales?
Among girls, princesses and the romanticized ideal they represent — revolving around finding the man of your dreams — have a limited shelf life. With the advent of "tween" TV, the tiara-wearing ideal of femininity has been supplanted by new adolescent role models such as the Disney Channel's Selena Gomez and Nickelodeon's Miranda Cosgrove.
"By the time they're 5 or 6, they're not interested in being princesses," said Dafna Lemish, chairwoman of the radio and TV department at Southern Illinois University and an expert in the role of media in children's lives. "They're interested in being hot, in being cool. Clearly, they see this is what society values."

I think the part that gets me is that small girls are already looking at "being hot" and taking on adolescent role models.

Granted, Disney will continue to make money from its library of princess classics for the next three or four hundred years.

And in the world of children's literature, while the fairy tale is no longer being made into picture books, it seems to have morphed into the fairy tale retelling for middle grade and young adult readers.

Still, Disney divorcing the princess? What a strange and sobering thought!

Update #1: Amy has followed up on this post with a great riff on princesses, her favorite childhood book characters, and just how Disney (and pop culture) gets it wrong over at Amy's Library of Rock.

Update #2: See also this post at Once Upon a Blog on Disney's decision, especially in connection with the box office success of Tangled. Thanks to Enchanted Inkpot author Marissa Meyer for the link!
Posted by Kate Coombs at 9:33 AM

While I don't agree with Disney's decision, I do understand it. My 2nd-grade girls were totally into princesses, but by the time they reached 4th grade they'd pretty much grown past it. I think retellings are a great way to bring back the tales they read and loved at a younger age.

I'm sad about this, especially because I feel it was preventable. Disney worked so hard over the past few years to brand all their movies as "princess" movies and market them to girls, and now they've lost the market for boys and they're blaming it on fairy tales. When really it's the way they've marketed them. I love fairy tales! And I don't trust Disney to come up with good stories on their own. :p

Aww this makes me sad because I love Disney's fairy tale movies. But then again, I grew up on those. It bothers me that small girls are interested in "being hot" because I don't think they should be thinking about things like that! Pfft this is why it's better to encourage children to read instead of watching TV.

I'm a little concerned about the "they're interested in being hot, in being cool" thing as well. I think this age group is being forced there. My daughter is 6 now and it has been tremendously frustrating as regards both clothes and entertainment. She doesn't want to dress like a preschooler (can't blame her) and I don't want her dressing like a mini teenager. There is no (or very little) in between. It is the same thing when looking at the toy section of stores. There is not much marketed for the 5-8 year old girl that is not about being hot and cool. The fantasy play stuff is marketed to the preschool demographic making this age group feel pressure to not want it anymore. Sorry for the rant, it's been building for months.

Kathryn--Yes, I'm very glad the fairy tales are finding a new form instead of being lost altogether.

Jenny--Good point about how Disney has handled things. As near as I can tell, only Pixar is capable of writing a truly fresh plot for an animated movie these days.

Brandy--What's so unfortunate is that there aren't any options to speak of. Either you're 3, or you're 13. Thanks for an excellent rant! :)

This is the first I have heard of Disney's declaration. My daughter is five and she still enjoys princesses, fairy tales, and the like. And, as far as I can tell, so do most if not all of her friends. I'm not sure what 5-6 year olds Dafna Lemish polled, but obviously she didn't call us. This month we've read several versions of Rapunzel (her favorite is the one illustrated by Trina Schart Hyman) and we plan to watch the new Tangled movie. Now I will say that we don't watch much TV and have so far avoided the tween shows. Being "hot" may be what society values, but it is up to parents to decide for this age group what is and is not appropriate. It's our job to weed through the garbage. Try Lands' End for normal clothes.

I think, to a certain extent, Disney has brought this on itself. They sanitized the fairy tale, and now they're complaining that fairy tales are too bland to appeal to children. Perhaps instead of scrapping fairy tales altogether, they should return to their original roots. The themes buried in fairy tales are timeless - courage, sacrifice, love, hope ... sitting around wearing a tiara, waiting for your prince to come find you, is a problem inherent in the DISNEY fairy tale, not fairy tales themselves. Even Sleeping Beauty, the classic "waiting for true love" tale, can be viewed more as a story of parents' love and devotion to their child if you just change your perspective a bit. It seems pretty short-sighted of Disney to blame the problem on the fairy tale itself, when the problem is their traditional interpretation of it. Why do they think "Beauty and the Beast" is one of their most popular movies ever? Because Belle has a brain and courage AS WELL as the smokin' yellow dress!

I agree with Elouise on the basic subject here. I think she's nailed it. But I actually popped by because this post has been dancing around in my brain for the past couple days and has made me think of ALL SORTS of Interesting Sort Of Related Things, and I think I'm going to have to post a whole post of my own on the subject in order to respond properly! So thanks and stay tuned-- I'm not sure when I'll get to it....

Amy--I look forward to seeing what you have to say about ASOISORT! By the way, I saw Tangled this morning and thought it was very fun.