I feel like a romance cliché: I fell in love with this book at first sight and never fell out. Which is ironic, since Dash & Lily's Book of Dares is pretty much dedicated to being anti-cliché when it comes to romance. 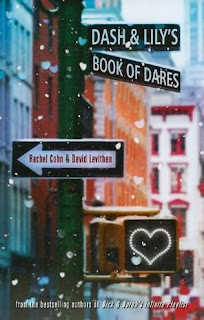 At first glance, it seems that this inspired pairing of authors, Cohn and Levithan of Nick and Norah's Infinite Playlist fame, are simply telling another lively tale of two young Manhattanites meeting cute and falling for each other. But it shouldn't take long for you to realize that the authors' true intentions involve shredding our culture's ubiquitous romantic comedy conventions and leaving us, not with answers, but with questions—or rather, with the endless question of the individual human: "Can I ever truly be understood?" Their answer seems to be, "No, but you can nevertheless be loved."

I recently had a conversation with one of my students, a teenage boy who just broke up with his girlfriend and was feeling bad about it. He said, "Everybody's a stranger, and always will be." This seemed to frighten him. I told him I was going to loan him Dash & Lily's Book of Dares. "It's all about that," I said. "But it still manages to have a happy ending."

As our story begins, it's Christmas time in the Big Apple, and Dash has fooled each of his divorced parents into thinking he's with the other one so he can spend Christmas in surly Grinch-like solitude. Well, perhaps not solitude, though he's definitely a young Grinch in the making: Dash discovers a red notebook incongruously shelved in a grand used bookstore called the Strand. (It's real! With an alleged eighteen miles of books.) The notebook challenges Dash to a little scavenger hunt in the bookstore, managing to embarrass him almost immediately. Dash picks up the gauntlet and returns the favor by issuing a dare of his own. Cynical Dash is pleased to realize that the notebook is obviously from an equally sardonic teenage girl trying to see if she can meet her male counterpart.

Only it's not. Dash doesn't know this for pages on end, but the girl, Lily, didn't start the notebook, though she does quickly enter into the spirit of things and keep it going. The notebook is actually the brainchild of her older brother, who is hoping to keep her entertained and out of his hair so he can enjoy spending the holidays with his new guy. (Their parents have disappointed Lily by going on a second honeymoon.)

Lily is about as far from a Grinch as you can get, a starry-eyed idealist who love-love-loves Christmas. She even drops her atheism annually so she can sing the religious Christmas carols with proper enthusiasm. While she's a little off the wall, Lily is not a major risk-taker, partly because she has a huge, overly protective extended family.

Yet this is not exactly a book about opposites attracting, either. It's more the story of assumptions and yearnings, the way no one can ever be the fulfillment of another person's romantic daydreams. You'll find that Dash is quite the philosopher-prince. His musings get a little over-the-top in spots, evoking the spirits of thirty-something authors past and present—but it all pays off, I assure you.

I'm afraid I'm making the book sound serious, whereas it's just as much a cheerily frenetic sleigh ride through New York City. The dares in the red notebook are creative and often funny, many involving field trips to urban landmarks. There's a spirit of friendly one-upsmanship, just as you would expect from a series of dares. For example, after Lily sends mall-hating Dash to Macy's at the height of the holiday shopping season to look for reindeer gloves, he retaliates by making her go to a matinee showing of a film called Grandma Got Run Over by a Reindeer with a horde of moms and toddlers.

Speaking of movies, the absolute funniest thing in the book, hands down, is the spoof of a Pixar movie and how Dash and Lily respond separately to having seen it. I laughed my head off.

A running joke is that Lily has colorful relatives working all over town whom she enlists to facilitate her dares. More than one of these relatives describes Dash as "snarly," which leads to the creation of a muppet-like creature that Lily names Snarly. (Lily's own historic nickname makes an appropriate pairing.) When Dash sees the critter, he says, "It looks like Animal and Miss Piggy had sex.... And this was the spawn." His best friend Boomer responds, "My eyes! ...My eyes! I can't stop seeing it now that you've said it!" Boomer is a great character in his own right. He tends to talk in exclamation marks.

"Cinderella was such a dork," Lily writes in the red notebook. This from the girl who dons a contemporary version of the glass slippers and loses one shoe at a ball (okay, nightclub). We also get dog walking, soccer goal-keeping, wax celebrities, ex-girlfriends, snowball fights, militant mommies, police cars, and Internet video scandals of the baby-catching variety. Not to mention marvelous secondary characters, including an extremely cool Bohemian great-aunt. (Best quote I've read recently: The late Eva Ibbotson said that whenever she was having trouble writing a book, she just added an aunt. Not that I'm biased in favor of aunts or anything.)

Keep an eye out for a couple of extra romances (or divorces) that play out around the edges of the tale, further embellishing the authors' book-length riff on the unpredictable nature of real-life relationships. As Dash's ex puts it, "I was never the girl in your head. And you were never the boy in my head. I think we both knew that. It's only when we try to make the girl or boy in our head real that the true trouble comes."

Dash and Lily begin to matter more to each other than they're supposed to as the dares continue, and in a way, that's because they haven't met. When they do finally run into each other, it's a disaster, but not for the reasons you would think. Turns out Dash, in his own way, is just as idealistic as Lily, and perhaps less resilient. After that encounter, they take turns being fearful and fearless, until eventually they come to a sort of truce that bodes well for the future. Because there's more to Dash than being snarly, just as there's more to Lily than her affinity for Christmas carols.

This is teen romance writ large, irresistibly so. It's romance over-scripted, over-analyzed, and yet, somehow, played out like a nice long game of Monopoly between two basically nice people. Seems pretty apt in today's world. I give you: Dash & Lily. Read their Book of Dares. And then watch for Book Two—apparently the authors fell hard for these characters, too, and are planning to make it a series. They've got a great cast to work with!

You might also like Let It Snow: Three Holiday Romances by John Green, Lauren Myracle, and Maureen Johnson.

Note for Worried Parents: You'll probably be concerned about the occasional use of the F word and a few crude remarks from the teenage boys. Also, there's some teen drinking, though the results are not appealing. It's mentioned here and there that Lily's brother and his new boyfriend are sleeping together, but Dash and Lily don't have sex with anyone in this book.
Posted by Kate Coombs at 10:39 AM

My son is named Dash, so I was hoping this book would turn out to be good! Thanks for the review.

Oh, how fun! You're quite welcome, and greetings to your son with the ever-so-cool name!

As if I wasn't pining for this book already - you've made it that much harder for me to wait to get my hands on it! Great review without giving too much away. :)

Thanks, Natalie! Hope you get your hands on it very soon.

Thank you for a lovely review - sounds like just what I need right now, a bit of escapism, a bit of holiday romance, a bit of thought-provoking questions.