The fairy tale may be struggling in the picture book realm, but it's making astonishing inroads elsewhere. The July 22 Entertainment Weekly provides a Comic-Con-themed preview of upcoming movies and TV shows, but what really caught my eye were the fairy tale offerings. As Jeff Jensen points out, "Perhaps the biggest trend (also presaged by Thor) is a shift toward mythic and fairy tale fantasy. Besides The Hobbit, 2012 will bring Clash of the Titans 2, Bryan Singer's Jack the Giant Killer, two Snow White movies, and the deliciously titled Hansel and Gretel: Witch Hunters." 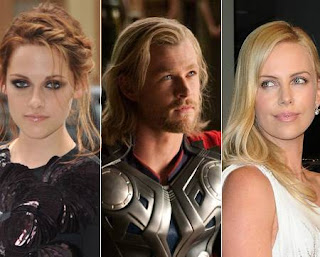 In related news, we have two fairy tale-themed TV shows premiering this fall. Grimm appears to be Supernatural meets police procedural with imported fairy tale baddies, while Once Upon a Time has more of an earnest character focus in the ultra-fictional town of Storybrooke. ("How did Jiminy Cricket become a cricket? How did Grumpy become grumpy?" executive producer Adam Horowitz inquires pensively.)

And perhaps earlier this year you saw Red Riding Hood, the movie with Amanda Seyfried as the rather grown-up heroine facing werewolves and the uber-religious hunters who track them down.

There are actually three Snow White movies in the works: The Brothers Grim: Snow White with Julia Roberts as the Evil Queen; Snow White and the Huntsman, the first in a planned trilogy in which Snow White (Kristin Stewart) and the huntsman (Chris Hemsworth) join forces with the seven dwarves (Ian McShane, Eddie Izzard, etc.) to lead a revolution against the queen (Charlize Theron); and Snow and the Seven, which finds our girl in China in the 1800s, assisted by seven martial arts-type Shaolin monks (script by Michael Chabon; directed by Yuen Wo Ping, the fight choreographer for Crouching Tiger, Hidden Dragon and The Matrix). 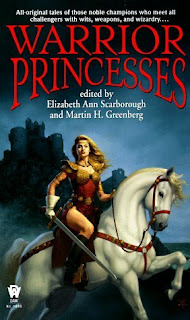 So what do we notice about these movies? That they're nearly all action films, with our fairy tale heroes and heroines highly inclined to kick butt. (Then there's Abraham Lincoln: Vampire Hunter. Maybe he can team up with Hansel and Gretel. Unless the kids take a detour to Salem, Massachusetts, that is.)

Of course, last year's Tangled is another example of the genre, although everyone knows the girl's hair was, um, inspired by Shannon Hale and Nathan Hale's graphic novel, Rapunzel's Revenge.

All of this is a little odd, but not exactly unsatisfying. And it leads us to a new question: What's next? Here are a few of my predictions for upcoming movie projects:

Sleeping Beauty: Narcoleptic Noir Detective—She walks the dark streets in a fedora, and it's only her sidekick the magically animated rosebush that keeps her from getting her throat slit when she falls asleep in the middle of a chase or a bar fight. 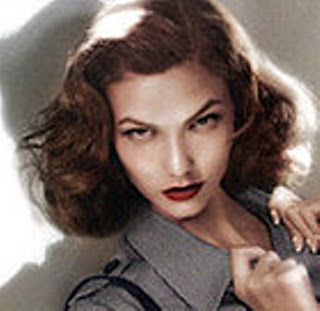 erial Killer—He lures them in with fool's gold and then chokes them with spinning wheel thread or stabs them with a spindle or... Let's just say this one's ripped straight from the headlines.

Cinderella's Heist—She's gathered her old friends the birds and mice, and they have a delightfully devious plan. Featuring lots of extra-mini Mini Coopers and a bank with those evil stepsisters on the Board of Directors.

Frog Legs—The no-longer-enchanted prince may look thin and a little greenish, but he's a champion kick boxer. He teaches the no-longer-spoiled princess everything he knows, and together they defeat the evil regent who has taken over the kingdom.

Nothing Gold Can Stay—A tragic tale of juvenile delinquency and drug abuse, to which three bears are horrified spectators. (Okay, so no martial arts in this one.) 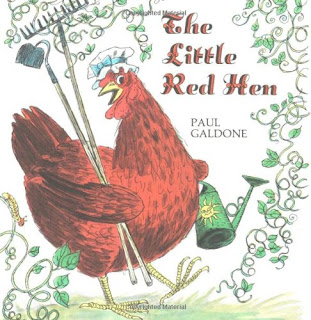 OR: Goldie and the Bears—Yep, it's the country band from the deep woods. But will fame spoil Goldie? Will she be lured by a greasy yet hunky agent into starting a solo act? Will Baby Bear's voice change? Will they win a Grammy before it all goes sour? Will they tenderly reunite and go back to the unspoiled safety of the woods?

Three Little Pigs: Twirling Trotters—After a series of challenges and a whole lot of bullying at a performing arts school, the Big Bad Wolf ends up in a dance-off with the talented dancing pigs. He loses.

The Gruff Brothers—They are known only as The Family, but they don't leave horses' heads in your bed; they leave trolls' heads. Beware... the Gruffness.

Little Red Bakes Bread—A lighthearted story of a gal who rediscovers herself in the face of the selfishness that surrounds her. Feminist comedy gets a remake as Red gets her wheat on.

Any more ideas? Pop them in the comments and I'll list them below!

Update, 8-25-11: Check out this interview with literature professor emeritus and fairy tale expert Jack Zipe on the subject of all those upcoming fairy tale-based movies.

Posted by KateCoombs at 1:04 PM

LOVE "Little Red Bakes Bread"! These cracked me up! Still, I like the trend of the fairy tale/mythology. Going to enjoy the good, and make fun of the not-so-good. : ) Fun post, thanks!

Oh man, were you on a roll with this one!

My personal favorite is the Sleeping Beauty one.

And now you actually need to WRITE these stories. Good writing exercise at any rate!

Jennifer and Brandy--Heehee. Glad you liked them!

Amy, I once submitted a collection of poems inspired by fairy tales, and the editor basically said, "These aren't quite working as poems, but why don't you turn them into MG novels?" Some day... :)

What a fun post! And you've really just touched the surface here. A casual perusal of any of the multicolored Fairy Books by Andrew Lang reveals a myriad of strange and bizarre tales just waiting for Hollywood.

Oh this is beautiful! We are currently doing a Fractured Fairy Tale theme over at GatheringBooks and this post is definitely something that we should link to when we do our round-up post. I like the quirky titles!! I like Rumpelstiltskin: Serial Killer and the Narcoleptic Beauty. haha. And yes, I agree that you have got to write these stories!! =)

Thanks, Kara and Myra! And Myra, can't wait to see the round-up.