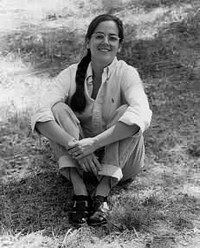 YES!!! Megan Whalen Turner's Queen's Thief series has won the 2011 Mythopoeic Fantasy Award for Children’s Literature! If you are a fan of fantasy, court and political intrigue, adventure, and complex character development and you haven't read this series, you are really missing out. 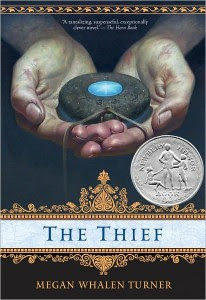 Together with the L.A. Times Book Prize to A Conspiracy of Kings for best YA book of 2010, this award to the Queen's Thief series should put to rest the fuss from certain awards committees that shall not be named, a fuss which denied Turner's books her due because "they couldn't stand alone." Others have complained that the books are too sophisticated for young readers, and while I might not hand them to a 9-year-old, I would certainly consider them for a thoughtful 12-year-old, let alone a teen.

Alone or together, Megan Whalen Turner's books are among the best in the business.
Posted by KateCoombs at 8:31 PM

I got excited when I saw this exciting news. Yay for the wonderful MWT! :)

So excited. I love this series.

I finally read The Thief recently, mostly due to your high praise of the series, and now I'm irritated that no one told me about this great series earlier. I can't wait to get my hands on the rest of the series, and I'm so glad it is getting recognition!

(ooo, Louise, the series gets better as it goes along, IMO! At this rate you will quickly become one of the fanatics!)

I have to admit, I envy E. Louise the opportunity to read the whole series for the first time!

Of course, the rest of us fans can just bask in the bliss of this honor for MWT's books.

I totally agree and I think it's about time MWT is getting her due.