A Review of Fly Trap by Frances Hardinge 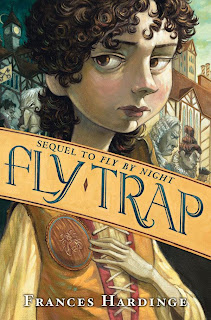 This author got a lot of attention last year for The Lost Conspiracy, but did you read her book, Fly by Night, a few years back? It was one of those odd, cool, and yes, under-appreciated MG fantasy novels. Now Mosca Mye is back and better than ever in a sequel, Fly Trap.

Talk about world building! Hardinge takes the ideas of astrology and religion and creates a society with hundreds of "Beloveds," or minor deity that dominate every day and night of the year. In Fly Trap, for example, each chapter is titled with a Beloved. The first five are "Goodman Springzel, Bringer of Surprises," "Goodlady Plenplush, Binder of Bargains," "Goodlady Whenyouleast, Mistress of Reunions and Remembered Faces," "Goodman Postrophe, Guardian Against the Wandering Dead," and "Goodman Jayblister, Master of Entrances and Salutations." Each chapter reflects the theme implied by its Beloved.

And there are more Beloveds mentioned in the text, say, "Goodlady Emberleather, She Who Prevents the Meat from Becoming Chewy and Unwholesome." Or sometimes, we're just given additional information. I like Goodman Springzel's other title, for example: "He Who Tips Ice Water Down the Collar and Hides the Pearl in the Oyster," for this Beloved is in charge of "surprises both good and ill."

Mosca and her companions, a violent goose named Saracen and a rotund, urbane con artist named Eponymous Clent, launch our story in a pretty pickle, then make their way to a strange town named Toll, where the Beloveds play a greater role than they did even in the first book. Here's Mosca in the first few pages, when Clent has been thrown in jail for damages done by Saracen, leaving her to offer her reading services in the icy streets of a strange town:

The rain washed people, stalls, and barrows from the market square, leaving only that one figure like a particularly stubborn stain. Drips fell from the tip of a pointed nose. Beneath a drooping bonnet with a frayed brim, hair spiked and straggled like a tempest-tossed blackbird's nest. An olive green dress two sizes too big was hitched at the waist and daubed knee-high in thick yellow mud. And behind the clinging strands of damp hair, two large black eyes glistened like coal and gave the marketplace a look that spoke of coal's grit, griminess, and hidden fire.

This shivering, clench-jawed scrap of damp doggedness had a name, and that name was Mosca Mye. Mosca meant fly, a housefly name well suited to one born on an evening sacred to Palpitattle, He Who Keeps Flies Out of Jams and Butter Churns. It was a name that would have been recognized in her home village, where a number of people would have had questions to ask about the burning of a mill, the release of a notorious felon, and the theft of a large and savage goose.

Mosca manages to spring Clent from debtor's prison, but not before she is kidnapped by a murderous conspirator named Skellow who is heading for the secret midnight auction of the Pawnbrokers Guild and needs someone to read for him. Then Mosca falls afoul of an old enemy, Mistress Bessel.

Soon on the road, or rather, the run, again, Mosca and Clent (and Saracen!) head for Toll, the city that guards the only bridge over the treacherous cliffs of the River Langfeather. In this strange city, Mosca discovers that her name will eventually make her part of the night Toll, while Eponymous is destined to be one of the day folk.

Here's where Hardinge gets exuberantly creative: every night, a bugle sounds and all of the people of the day city not only lock themselves into their houses, but are locked in by certain mysterious denizens of the night. Even the streets and buildings are reconfigured when darkness falls, creating a whole new city, the poverty-and-crime-filled Toll-by-Night. Toll therefore has two populations, those with negative Beloveds and names who may only come out at night, and those with positive Beloveds and names who may walk by day. In fact, a baby born with a night Beloved to a day-dweller must be given up for adoption to a night family and vice versa.

In someone else's hands, this might not have worked, but Hardinge is a brilliant storyteller, and she sweeps us along into the strangeness that is Toll.

What's more, Clent and Mosca are in the city with a mission, hoping to rescue the mayor's too-sweet, too-lovely daughter Beamabeth Marlebourne from a kidnapping plot planned by Skellow. Of course, they're in it for the reward money, which will allow them to pay their way out of the far gate of Toll. (This is necessary because Clent is too well known as a scammer in the lands they've left behind; he needs new sheep to fleece!)

The plot is further complicated by the need to investigate the kidnapping in night Toll as well as in day Toll. It's actually very difficult and dangerous to cross from day to night. Another factor is the town's Luck, a treasure which keeps the rather precarious bridge from falling down--and which Mistress Bessel pressures Mosca to steal for her.

In fact, there's so much scheming and color here that your head might well spin, but I can assure you, you'll be glad of it!

One of the best things about this book is the characterization, especially the way mostly selfish Clent and mostly survival-oriented Mosca subtly look after each other. Their relationship, a sweet-and-sour version of the father-daughter bond, is touching beneath its rough surface. Take this sample interaction between the two:

"...And what, pray, are your plans for me between now and the end of the mutton haunch? Have you auctioned my last hour to a press gang or a road-building crew?"

"Actually, Mr. Clent," Mosca suggested quietly, "I was thinking we could spend the time running away a lot."

You may find it intriguing to learn that Mosca tends to doubt the existence of the Beloved--and then worries about whether she should.

Other great characters include the saccharine Beamabeth and her anguished swain, Brand Appleton, a midwife named Mistress Leap, and the still-creepy Locksmith, Aramai Goshawk (last seen in Book One). I especially liked Laylow, a girl smuggler who wears claws on one hand and defies the Locksmiths each night, springing across the rooftops.

Watch, too, for the dreaded visitation of the skeletal Clatterhorse, and take a look at the way Hardinge uses the apparition-cum-protection racket to do some wild things with her already-convoluted plot. She also raises questions about class, prejudice, and injustice, weaving them seamlessly into her tale.

Furthermore, Hardinge is a brilliant wordsmith. In particular, her metaphors are as fresh as new bread and are utterly suited to their context. Here's a sample description to give you an idea. Note the incorporation of the villainous Skellow, who would be happy to catch up to our heroine and kill her.

...Mosca clutched the bonnet to her head as the cart jolted and jarred its way across the moor, the road before it little more than a conspiracy of stones.

The moor was less ominous in daylight, but Mosca still caught herself flinching each time a parchment-colored leaf spiraled down from a tree, or when a change in the wind splayed the dry grass that sprouted from the walls of stacked stones. Some trees were so knobbed and crooked that they seemed to be made up of elbows and knees. Skellow trees with thorns for eyes, watching her pass.

It really isn't necessary to read Fly by Night before reading Fly Trap, but I would certainly recommend it. In any case, for a labyrinthine, tense, witty, and utterly entrancing read, pick up Hardinge's new book!

Note for Worried Parents: Mosca lies when it suits her, usually to get out of a bad situation, and Clent lies for a living. I really don't think your children will be likely to imitate their behavior, though. The plight of the night folk and especially the state of prisoners in the town jail are awfully dire, and there's quite a bit of peril. The tone tends to the Dickensian.

Update 8-15-11: Link to the Guardian to hear Frances Hardinge talk about the book and invite children to participate in a book review competition. Or just read this interview, also in the Guardian.

Update 8-25-11: Read this excellent interview of the author at By the Book.
Posted by KateCoombs at 6:16 AM

I am planning to read Fly by Night this weekend and from what I have heard I will definitely be wanting this one soon after. They both sound fantastic. I can't wait!

Brandy, I actually liked the second one a bit better. But they're both pretty cool, a unique mix of cynicism and hope. Enjoy!

I'm so excited there's a new Frances Hardinger book out! She just keeps getting better and better. I read Fly By Night a while ago, so I'm going to reread it now. I loved the Lost Conspiracy, and Verdigris Deep was so deliciously creepy! (My blog is starting to sound like a Hardinger fan club!)

Kim--I haven't seen Verdigris Deep; I'll have to look for it!

FLY BY NIGHT is one of my all-time favorite books!!! How did I not know that there was a second one??? While I always read your reviews, please understand that I must wait to read this one. Have to read the book first. FYI: Verdigris Deep is titled WELL WISHED here in the US and is already out in paperback. I have gushed about both these books on my blog. Hope you like it and thanks for the review! I just have to add, sadly, that a quick check showed that NONE of the Barnes & Noble stores, from the California/Mexico border to Irvine, in Orange County, have FLY TRAP on the shelves. This is SO WRONG!!

That's terrible! I guess I got it from Amazon and didn't notice... Let me know what you think once you've read Book 2! And thanks for the heads-up about Well Wished. :)