A Review of Keeping the Castle by Patrice Kindl

This book has been compared to I Capture the Castle by Dodie Smith, and it does have a similar voice. But I am also reminded of books like Tom Angleberger’s Horton Halfpott: Or, The Fiendish Mystery of Smugwick Manor; or, The Loosening of M'Lady Luggertuck's Corset, not to mention Cold Comfort Farm by Stella Gibbons. There’s a droll, tongue-in-cheek feel to this book. Keeping the Castle is a parody of Pride and Prejudice and other, lesser Regency-era romances, but it also draws on Cinderella and any book you may have read in which the female main character is far more pragmatic than her plot might imply. 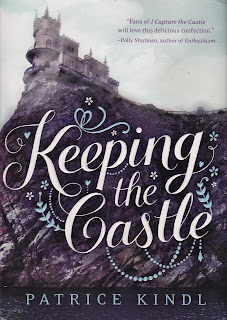 As our story begins, it’s a beautiful  spring morning and lovely narrator Althea is walking in the castle garden with a young man who is about to make her an offer of marriage.

“I love you, Althea—you are so beautiful,” murmured the young man into my ear.     Well, I was willing enough. I looked up at him from under my eyelashes. “I love you too,” I confessed. I averted my gaze and added privately, “You are so rich.”

Unfortunately, she murmurs the words just under her breath, and the young man has sharp hearing. He is immediately offended. Althea explains that it’s a pretty sensible tradeoff, her looks for his money. When he asks if she would stop loving him if he lost all his money, she responds readily:

“If I became ill,” I countered, “so that my hair fell out in clumps and my skin was covered with scabs and I limped, would you still love me?”     “Egad!” He stared at me, evidently attempting to picture this. He turned a little green.

The discussion goes downhill from there as the suitor tells her that when a young man admires a woman’s beauty it’s an artistic, spiritual thing, but when a woman admires a man’s money “it is mercenary and shows a cold heart.” The no-longer-a-suitor leaves in a huff.

Hmm, Althea thinks, didn’t like him much anyway. Now who can I snag? We learn that the castle is a fake castle, a monstrosity her foolish grandfather built perilously on the edge of a cliff. The place is falling apart. Althea and her mother want to rebuild it for her four-year-old brother because it’s all that’s left of the family fortune. In order to do that, Althea must marry into money.

In fact, for you English majors out there, the fake, falling-down castle makes a good metaphor for all of the artificiality inherent in a system of genteel poverty, aristocratic morning visits, and social hierarchy. Kindl skewers these things gleefully, especially the morning visits. When wave upon wave of neighbors descend on Althea’s household, she resorts to reusing the tea leaves, toasting the last bit of stale bread, and sending the scullery boy out to fish for minnows in the moat. The aristocrats’ names are also in for a fine bit of mockery.

Kindl throws in two selfish stepsisters straight out of Cinderella. Prudence and Charity try to hide Althea’s beauty from any young men they might encounter. They are the only ones in the family with any money at all, so they try to out-dress Althea, too, with mixed results. One of them even borrows a little from one of my favorite parts of Huck Finn:

[Prudence] was the elder, with a broad, flat face and figure, and few pretensions to beauty. Her favorite pastime was collecting quotations on the subject of death and mortality. She wrote them out in an elegant hand, decorated them with sketches of weeping willows and mourning urns, bound them up in an album labeled “Memento Mori,” and then gloated over them. “He seemed in a bit of a hurry. I trust you did not chase him away with that indiscreet tongue of yours, Althea.”

I particularly liked reading about how Althea goes to elaborate lengths to wring money out of her stepsisters.

Then there are the newly arrived young men in the neighborhood: sweet, handsome, Lord Boring (yes, Boring!) and his rude cousin, Mr. Fredericks. Althea sets her sights on Lord Boring, but then Mr. Fredericks seems to take an interest in her. Though the author hints rather broadly that Boring doesn’t actually have the money, Fredericks does, Althea is oblivious for much of the book. Mr. Fredericks is far more ill-mannered and abrupt than, say, Mr. Darcy, but he is clearly the man for Althea. As he himself eventually points out, he and Althea should marry because they like quarreling with each other. As for Lord Boring, he is just as wimpy but not nearly as reliable as Austin’s Bingley.

Althea really does remind me of Stella Gibbons’ Flora in that she is not greedy, ambitious, or unkind, simply highly practical. And though she does misjudge Mr. Fredericks a la Elizabeth Bennet and Mr. Darcy, she certainly has her reasons.

The humor in this book is at its height in the early chapters, after which the laughs are more occasional. But it’s fun to read a spoof of a favorite genre, and Kindl remains witty, if not hilarious, to the end—when, rather than kissing Althea, Fredericks shakes her hand, well pleased with her response to his proposal.

Keeping the Castle is a cheery, entertaining read from the author of other wonderful books including Owl in Love and the fairy tale sendup, Goose Chase. Recommended with a grin and even a guffaw.
Posted by KateCoombs at 9:21 AM

Glad to know about this one. It sounds like fun!

Thanks so much for this!

Ruth--Very fun! Sometimes you just need to laugh while you read, especially if you've overdosed on dystopians.

Truly looking forward to this one coming from the library. I need a good P&P spoof.

Melissa--There just aren't enough good P&P spoofs around... (I don't quite count Pride and Prejudice and Zombies, though that's a tacky neo-classic in its own way!)