A Review of The Fantastic Flying Books of Mr. Morris Lessmore by William Joyce 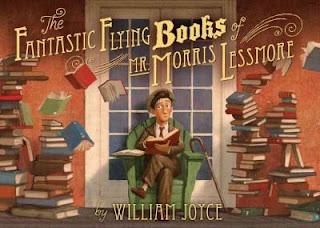 After William Joyce’s short film by the same name won an Academy Award, he turned it into a picture book. I actually read the book first, then watched the film on YouTube. (Here are a couple of links, but there are more.) So how does the book compare to the movie, and how does it work as a stand-alone?

I am happy to note that this story is an homage to the joy of reading that covers the roles of the reader, the librarian, and the writer. It’s a fantasy, but it has the feel of a fable or magical realism.

We begin with a man named Morris Lessmore (Less is more?) who is writing a book. A terrible windstorm not only blows the book away, but blows the letters from the pages. This happens to others, but it’s especially upsetting to Morris, who has been writing that book for a long time and loves it dearly. He follows the book into the storm and winds up in a strange land where everything appears to be black and white until he sees a woman in the sky being wafted along by a couple of dozen books that act like a cross between a bunch of helium balloons and a flapping flock of geese.

The woman drops him a book that acts as both character and guide in the form of a friendly Humpty Dumpty who uses flip-book techniques to communicate. Morris follows the book to a building that appears to be an abandoned library. There books nest and fly aimlessly around till they meet Morris. They rope him into reading and repairing them, even dancing with them. Morris becomes the librarian and starts giving out books to the black-and-white people, who take on color as they read. The books come to life, too, as Morris cares for them and reads them. Most important, Morris writes his book, which we come to understand is a metaphor for his life. After he finally writes “The End,” Morris himself is finished. He flies off with a flock of books just as his predecessor did long ago. He is young again now, but he is going away. A new reader will come to take his place and even read his book.

That was the film, which I just watched. Now I’ll revisit the book…

The illustrations are excellent, just as you would expect, and carry the story along. William Joyce worked with Joe Bluhm on creating them. Unfortunately, the film is so visually  effective that Joyce succumbs to the temptation to simply describe the story on these pages. It would have been hard to back off, I can imagine, but it needed to be done. There’s too much telling, summarizing, and explaining in the book, where the movie was entirely wordless, carried along by a simple tune, “Pop Goes the Weasel.” For example, on the very first page of the book, Joyce explains the metaphor: “His life was a book of his own writing, one orderly page after another. He would open it every morning and write of his joys and sorrows, of all that he knew and everything that he hoped for.” No, no, no. (Note the abstract phrasing!)

So, while the book is lovely, its language doesn’t do justice to the tale. The words should have been mysterious and poetic, like the film. Sigh. You really should watch the short film of The Fantastic Flying Books of Mr. Morris Lessmore. It is just about perfect.
Posted by KateCoombs at 12:05 PM

This sounds right up my alley. Love this. I've never heard of the movie but I plan on watching it.

Adriana--I think you'll really like the movie. The book's nice, but just not as compelling.