A Review of Forget-Me-Nots: Poems to Learn by Heart, ed. Mary Ann Hoberman 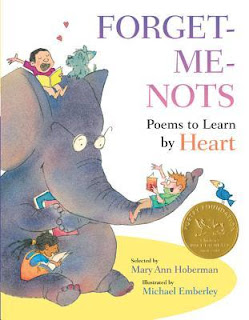 When my grandmother was a child, one of the tasks of a schoolgirl or boy was to memorize poems. She knew dozens of them by heart. Today we tend to scoff at the idea of memorizing and reciting poems, but there’s something nice about carrying certain poems, not just in your pocket, but in your heart.

Mary Ann Hoberman’s collection of poetry returns to the idea of memorizing poems. Still, even if that’s not your goal, you’ll find that these poems are just right for reading aloud. Either way, Hoberman has put together a strong collection. She has divided it into 11 sections:


I like that Hoberman’s topics provide for a pleasing variety of poems. She also includes some suggestions for memorizing poems at the end of the book, which is useful.

Michael Emberley's illustrations are light and loose, picking up themes and running with them. For example, on a spread about food featuring Carol Sandburg's "Soup," "My Father Owns a Butcher Shop" by Anonymous, and Walter de la Mare's "Miss T," Emberley shows us four characters eating at a diner counter and, in two cases, peering sideways at each other over newspapers with alarm and annoyance. Two of the characters are monsters of some kind. It's all very fun to look at! Many of the illustrations catch one aspect of a poem and leave other aspects for kids to imagine, which is nice.

While most of the poems are rhymed, the editor does include some free verse and haiku. You will certainly find frequently anthologized poems within these pages, but you will also find less familiar poems. Here are a few of them:

It wants something; it calls and sings; it pours
out wishes to the overhead stars.

Old Man Ocean, how do you pound

Old Man Ocean, how do you pound
Smooth glass rough, rough stones round?
Time and the tide and the wild waves rolling,
Night and the wind and the long grey dawn.

Old Man Ocean, what do you tell,
What do you sing in the empty shell?
Fog and the storm and the long bell tolling,
Bones in the deep and the brave men gone.

Of course, I really like atmospheric, shivery poems like these two. Forget-Me-Nots gives us plenty of light and funny poems, as well.

I often pass a gracious tree
Whose name I can’t identify,
But still I bow, in courtesy
It waves a bough, in kind reply.

I do not know your name, O tree
(Are you a hemlock or a pine?)
But why should that embarrass me?
Quite probably you don’t know mine.

I own a number of poetry collections, and my concern is always for the overall quality of the poems. Forget-Me-Nots offers up a high-quality selection of poems worth sharing with young people, whether you encourage them to memorize the poems or just to listen to the magic of this peculiar, satisfying, compact creative form. A cover sticker indicates that Mary Ann Hoberman was children's poet laureate for the Poetry Foundation from 2008 to 2010. I can certainly see why.
Posted by KateCoombs at 11:07 AM