It’s been my observation that children’s nonfiction has improved about 600% in the last 20–30 years. These three books help to prove my point, if not my math.

Brave Girl: Clara and the Shirtwaist Makers’ Strike of 1909 by Michelle Markel, illustrated by Melissa Sweet

How do you teach children about labor history? If they remember anything about Labor Day, it is that it’s a day off. Yet the day actually celebrates people like Clara Lemlich, a young Jewish factory worker in the early 1900s.

At first the book seems to be a typical tale about an immigrant family. But it isn’t. Here’s how Markel begins:

A steamship pulls into the harbor, carrying hundreds of immigrants—and a surprise for New York City. [page turn] The surprise is dirt poor, just five feet tall, and hardly speaks a word of English. Her name is Clara Lemlich. This girl’s got grit, and she’s going to prove it. Look out, New York! 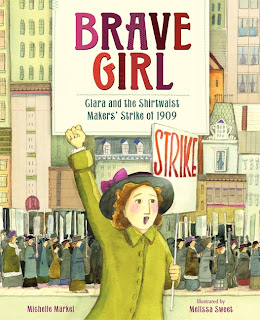 Clara’s father can’t find work, but she does, as a worker in the garment industry. Markel does a good job showing us how hard the girls were expected to work. And we get things like this: “There are two filthy toilets, one sink, and three towels for three hundred girls to share.”

The illustrator also does a good job with this material. After scenes of Clara’s family arriving in New York, we come to a page looking down at the garment workers from the top: rows and rows of girls sitting at sewing machines sewing, looking more like a geometric pattern than people. Sweet works mostly in blues and yellows with touches of red. She softens her palette to subtly invoke the sepia look of old photographs. Sweet uses mixed media for her backgrounds on some pages: fabric with stitches and bias tape.

We follow Clara as she learns the rules of working in the garment industry: The girls lose half a day’s pay for being a few minutes late, can be fired for a pricking their fingers and getting blood on the fabric twice, and are locked into the factory from morning to night.

Clara wants to protest the terrible working conditions, especially after male union workers encourage her. She urges the other girls to strike, and finally they do. Clara is beaten, and she is arrested 17 times, but she keeps going.

The book just gets better from there. This is a story of power from the people who together make the wheels of society turn. It is all the more effective because it’s about a young immigrant girl who refuses to back down. Well told, well illustrated—Brave Girl is a story kids really should hear. In a day when unions are sometimes thought of as a problem, it’s good to be reminded that things like an 8-hour day and a five-day work week came about because of the efforts of ordinary people like Clara Lemlich.

Note: An author’s note gives additional information about the garment industry and labor strikes in other cities.

Did you know that some of the workers who built the first White House were slaves? This book is their story. The slaves were rented out by their masters for the project. 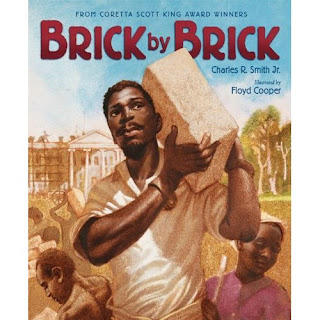 Rented as property,
slave hands labor
as diggers of stone,
sawyers,
and bricklayers.

Smith describes these events poetically, in simple, strong language like the sound of hammers striking stone. The lines rhyme occasionally for emphasis, but not throughout: Floyd Cooper’s illustrations are done mostly in shades of brown, with a blue sky every so often that makes me think of hope. Sometimes the faces in children’s book illustration are simple or cute, but not in Brick by Brick. Cooper depicts these faces, mostly slaves but a few masters, with a kind of softened realism and with great feeling and character. I’m not sure how the illustrations were done—perhaps with watercolor washes and then colored pencil on textured paper. This is a very lovely book, and one filled with understated yet powerful emotions.

We read that in time, the slaves learned skills that qualified them to be paid one shilling a day. They saved the money towards buying their freedom:

By the time you reach the last page, you know something important: The president’s home is beautiful, but it is not as beautiful as the promise of freedom.

Note: Brick by Brick includes an author’s note that explains why slaves were used to build the first White House. Also, the illustration on the left shows the construction project from a different perspective. It is not from the book.

Right now the talk is all about Nelson’s recently released I Have a Dream, a wonderful book about Martin Luther King, Jr.’s famous speech. But I’m holding an ARC of his next picture book in my hands: Nelson Mandela. The front cover is simply a portrait of Mandela, no title. You can find the title on the back cover.

Where I Have a Dream captures a moment in time, Nelson Mandela is very much a biography. Most pages have about a paragraph of text, though a few have more. The book would make a good read-aloud for about 3rd-5th graders.

We begin with a boy named Rolihlahla. Already he is being changed by the world around him:

Rolihlahla played barefooted on the grassy hills of Qunu. He fought boys with sticks and shot birds with slingshots. The smartest Madiba child of thirteen, he was the only one chosen for school. His new teacher would not say his Xhosa name. She called him Nelson instead. 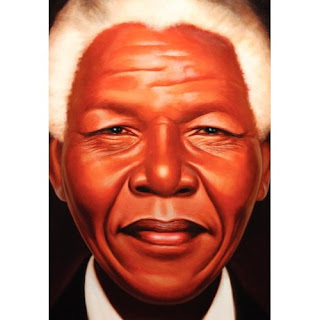 The first spread is done almost entirely in silhouette, with the boys and the hill they are playing on shown in black. The sun has just barely risen over the hill behind them, and a small slice of green plain and blue mountain is seen off to the left. A few houses sit on the plain. It’s a stunning image, and something of a departure from Kadir’s expected human figures. The wide-angle painting makes a poignant introduction to the next spread, where we read that 9-year-old Nelson is being sent miles away to live with a powerful chief after his father’s death. The image is a close-up of two people in profile, with Nelson’s mother on the left and a young Nelson on the right. She holds his unhappy face, staring into his eyes.

In his new life, Nelson listens to stories told by the elders of old Africa. We read that he grew up and attended school in Johannesburg, “where Africans were poor and powerless.” Nelson became a lawyer and began to help his people.

The story continues, showing the experience of apartheid and Nelson’s activism and long imprisonment. “His children grew up. Relatives passed away. South Africa began to fall apart… Nelson snuck a message to the people: ‘I will return.’”

And he did return. At last Nelson was free. Apartheid ended, and Nelson Mandela became the first black president of South Africa.

Kadir Nelson’s storytelling is clear and powerful. His illustrations capture the souls of his subjects, especially Nelson Mandela. Many of the pages in the book are quite dark in tone, but the last two spreads are bright with color and sunshine, lifting like a song. A striking book that you can read and treasure.

An author’s note gives additional information about Mandela and apartheid in South Africa.

It’s been said that children in our day lack real heroes, reduced to looking up to pouting pop stars, millionaire athletes, and fictional superheroes. Give them these three books and others like them. Give them heroes.

Note: Thanks to HarperCollins for sending me review copies. Brick by Brick will be out in December. Nelson Mandela and Brave Girl will be out in January.
Posted by KateCoombs at 8:39 PM

I think it's a responsibility of authors to impart some sort of knowledge when writing a children's book. Whether it's teaching about history or helping kids understand how to get along better. Thank you for these recommendations!

Thank you for reviewing Brave Girl. As part of my research for the art, I visited the Tenement Museum in NYC (http://www.tenement.org/). It was a very authentic experience of how Clara Lemlich lived at that time and helped shape the illustrations.
Brava to Michelle for telling this important story in an inspiring way.

Traudi--You're welcome! I've found that fiction tends to teach whether it's meant to or not, but as I said, this is a particularly rich time for children's nonfiction.

Melissa--Thank you for stopping by, and for sharing one of your sources. You and Michelle both did a great job!

Kate,
I really love your site. I check here often when shopping for books for my niece! I was wondering if you accept requests for book reviews? I have a friend who is a new author trying to get her book a little notice. Any thoughts? Thanks!

Thanks, Living Free! I would just ask if your friend is with a publisher I would recognize or has self-published? I tend to stick to the former because (a) they keep me busy enough and (b) I have yet to see a really terrific self-published book. Someone may surprise me one of these days, though. :)