Not Your Grandma's Picture Books

It's true. Picture books don’t have to be about pink princesses who live sugarishly ever after…

The Conductor by Laëtitia Devernay

I found out about this French illustrator’s book when it won the Society of Illustrator’s Original Show: Children’s Book Illustration gold medal this year. Then I learned that Devernay won a major British award for the book as well, top prize from this year’s V&A Awards. (I looked high and low to figure out what V&A stands for. It’s Victoria and Albert—the museum. Of course.)

Here's a plot summary: A conductor conducts the leaves on trees, which turn into birds and fly around a bit before coming back to the trees to be leaves again. This summary does not do the wordless book justice, however. Each spread has its own design and beauty, evoking Escher a little and, for children’s literature fans, the scene in which Milo conducts a sunrise in The Phantom Tollbooth—or rather, when he sees sunset conducted the night before.

Devernay illustrates the entire book using a couple of greens, a very pale yellow and black. There’s a whole lot of white space going on, as well. The trim size is unusual: it’s about 5 and ¾ by 13. (I measured.) 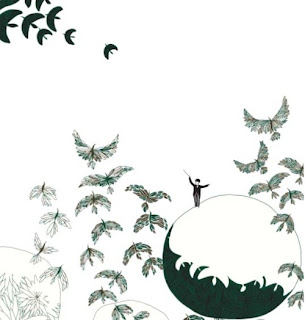 The Conductor has something to say about music, about trees, and about birds, but in a way it’s about none of these things. It’s only about them as they interact, creating something new. Perhaps I don’t care much about green lollipop trees with an almost paisley pattern or a little conductor in a black coat and striped pants. Maybe birds don’t move me, either. But when the conductor lifts his baton and the leaves begin to transform, rising into the sky—then I care very much. That is the magic of Devernay’s book.

I’m not going to tell you about the spread where the conductor takes his bow, or what he does with his baton. You really should find out for yourself.

Note: As for the other winners of the Society of Illustrators' Original Show in the children's book category, we’ve got silver medals for The Beetle Book by Steve Jenkins and This Is Not My Hat by Jon Klassen, with a Founders Award to The Insomniacs, illustrated by the Brothers Hilts (author Karina Wolf).

This book is so much like the movie Hoodwinked in certain respects that at first I looked all over to find some kind of credit. After all, that movie is about a land of fairy tale creatures in which a big bad wolf turns out to be an investigative reporter. He gets some help with crime solving from Little Red Riding Hood and a debonair frog P.I. in a fedora—Nicky Flippers. 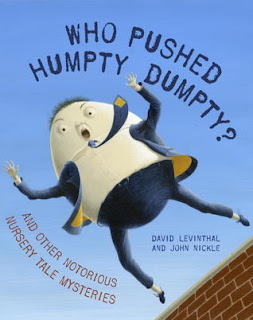 For its part, Levinthal’s book is about a land of fairy tale creatures in which a debonair frog solves crimes. Oh wait—I stand corrected. Officer Binky is “a toad in a fedora,” according to the flap copy. So let’s move on.

Who Pushed Humpty Dumpty? gives us five fairy tale cases: a break-in at the home of the Bear family, the case of the death of a witch who lived in a gingerbread house, the title case, the case of a beauty pageant involving Snow White and the Queen, and the case of Jack and that beanstalk.

The book is more of a read-aloud for kids as young as 7. It’s really more geared towards the 8-to-10 crowd. Not only is the text small (usually an easy way to guess a picture book’s intended audience), but the whole thing’s a satire. Satire goes right over the heads of most younger readers.

However, that said, I really liked this book! Here’s how it begins:

There are eight million stories in the forest. This is one of them.
It was a typical Sunday morning for the Bear family. They had gone out for a walk while their porridge was cooling.
I was working the robbery detail out of the Pinecone Division. My name’s Binky. I’m a cop.

As always, John Nickle’s illustrations are just right. (Allow me one fairy tale pun!) I especially like the page on which Officer Binky is taking notes from the three Bears. He’s standing in front of a layered tower of bears—so all in one shape we have Binky (back to us) in front of Baby Bear, who’s in front of taller Mrs. Bear, who’s in front of taller Mr. Bear. All three bears are frowning and pointing one accusing clawed paw in the direction of the page on the other side of the spread. That page is divided in four. The first three frames contain the following clues: A strand of blond hair, an empty porridge bowl, blue cloth on a broken chair, and a rumpled quilt. The last frame shows Binky driving off. (He’s barely tall enough to see over the steering wheel.) He says, “I’d heard that story before. It could only be one dame: Goldilocks! I nabbed her trying to make her getaway.” The perp has an excuse, but she ends up in jail just the same.

I won’t tell you much about the other cases, but they are presented with panache, too. Hansel and Gretel’s encounter with the witch is told after the fact using sepia illustrations, a nice touch. The Humpty Dumpty mystery has an un-egg-spected solution. (Make that two fairy tale puns.) Setting the Snow White story in a beauty pageant gives the tale a whole new twist. And then there’s Jack. I’ll bet you think you know where that one’s going, but you’re probably wrong.

Meet Binky. And read his case files. You'll like them.

I’ve been looking forward to this one. Just check out Dan Santat’s book trailer. The whole concept makes me laugh. There have been a lot of fairy tale parodies out over the last 10–15 years, but The Three Ninja Pigs gets off to a much funnier start than most. Just read the title! 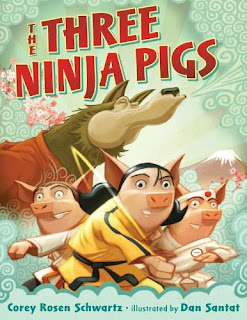 Oh, all right, I suppose I’d better open the cover and look inside. Let’s pause at the front jacket flap:

Why do wolves think they can come to town and blow all the houses down? These three pigs just aren’t going to take it!
The first starts aikido lessons—he’ll make mincemeat out of that wolf!
His brother learns a little jujitsu—he’ll chop that guy to pieces!
But when the wolf actually appears, it turns out these two pigs aren’t quite ready after all. Good thing their sister has been training every day to master some serious karate moves. KIYA!

Yep, that’s my new favorite thing about this book: the third pig is a girl. Plus she’s a better ninja warrior than her brothers. (That would be because they don’t practice.)

Forgot to mention: the story is written in rhyme. I'm generally not fond of this choice for a narrative picture book, but I've decided to get over it for the moment in order to enjoy these ninja piggies.

Dan Santat’s illustrations are just as funny as the premise. For one thing, he delivers on the martial arts action. Well, perhaps not for the two pig brothers. I like the way Santat shows aikido practice—including the first little pig snoozing on the floor while an irritated instructor looks down at him. The teacher in Pig Two’s jujitsu class is a classic mentor. I think he's a water buffalo, but he reminds me of Obi Wan Kenobi. “Excellent progress,” he says, “But Pig-san, you MUST study more.” To which Pig Two replies, “No way! Sayonara, Sensei.”

In contrast, Pig Three studies karate diligently. After she gets better and better, she even breaks boards “by performing a perfect pork chop!”

Pigs One and Two don’t do so well with the wolf. Not even when Two yells, “Retreat! Or you’ll suffer defeat by the hair of my chinny-chin-chin.” But Pig Three isn’t joking when she says, “I’m a certified weapon.”

I think you’ll like the wolf, who wears red karate clothes, does that “bring it” move like in Karate Kid, and says to Pig Three, “Yo, Bacon,” at least until he sees her moves. Then he rethinks the idea of taking her on.

Of course, I agree with critics of spoofs like this one that kids should read the original first. Once they’ve done that, it's time for the porcine ninjas!

Note: A glossary at the back explains terms like sensei and provides pronunciations.
Posted by KateCoombs at 9:49 PM

Those look like fun! Even though we are all technically too old now in my house for picture books, some of us might well look out for them and leave them out on the coffee table...to be found and enjoyed by others of us!