All four of these books are about legacies. Three of them are about secret societies to which the kids’ parents belong—two of those societies being questionable—and one is about the unlikely inheritor of super powers. It feels kind of like Harry Potter, only with adventure instead of magic. The winds of children’s fiction seem to be blowing in the direction of suspense, conspiracies, and secret societies. I think you’ll like riding this next gust.

Capture the Flag by Kate Messner 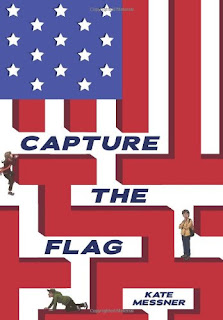 I’m catching up on Messner's book, which came out in July. It’s a locked-room mystery in the sense that a bunch of people is trapped in an airport because of a snowstorm. Among those people are four kids who, after initial disinterest, team up to solve a mystery: someone has stolen the historic American flag that inspired “The Star-Spangled Banner.” Each of the kids has some sort of connection to the flag. To start with, all four of them were at a museum reception for the flag exhibit the evening before—and the flag was stolen that night. Anna’s mother is a newscaster and her father is a Senator. She sees herself as a budding news reporter. José’s mother worked on restoring the flag. Henry’s aunt is a history buff, though Henry would far rather play video games. Sinan is the son of two members of an orchestra from Pakistan that performed at the exhibit—an orchestra that is eventually accused of stealing the flag. Sinan is the owner of a rambunctious poodle named Hammurabi, too.

Anna tries to get an interview with Senator Snickerbottom, who is also in the airport. He’s leading up to a campaign for president. Then there’s Snake Eye, a man with an odd tattoo who acts suspiciously. Throw in a couple of thugs while you're at it. Pretty soon Anna and her friends are sliding and hiding in the luggage area, where a lot of chase scenes in the book take place. The secret society thing comes up later.

The four kids are likable, each with his or her quirks. For example, as he learns English, Sinan keeps a notebook in which he draws pictures to help him remember expressions like “full of beans” and “killing time.” These pictures are included in the book. Anna is intrepid, José is sweet but sturdy, and Henry is sucked into things against his will but proves helpful in the end.

Quite a few characters in the book are not what they seem.

This is a very kid-friendly book, with exciting yet ultimately non-perilous peril. I can easily see it being turned into a movie. I'll just end by saying that the book's title deserves to be in the Clever Title Hall of Fame.

First line: They never should have unlocked the door.

We begin the book at ground level, where the members of fan clubs and the public in general rush outside to watch whenever their hero, Captain Stupendous, battles a villain in the skies overhead or even in the streets out front. As our boy Vincent tells us, “So when a giant robot came to town and picked a fight right outside Spud’s Pizza, you can guess how psyched I was.” 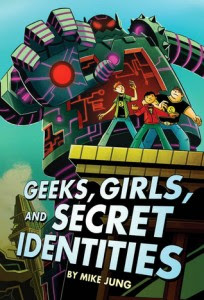 But something goes wrong, and Captain Stupendous goes silent. Then when he does show up, he doesn’t fight the way he normally does. Vincent and his buddies Max and George wind up being the only ones to find out the truth: their hero has been replaced by someone’s who’s not only inept, but who really doesn’t want the job. It’s up to Captain Stupendous experts Vincent, Max, and George to train the new hero and come up with strategies for defeating the new super villain in town.

Of course, I’m avoiding some intriguing spoilers having to do with Vincent’s friends and family.

The best thing about this book is the awesome geekdom of Vincent and his buddies, who throw themselves into their new challenge with verve and reckless abandon. Frequent moments of humor give the book a dimensionality that would be lacking if it were just straight suspense.

Villainous activities in the book range from mild taunting by the irritatingly studly members of another fan club to the evil machinations of the super villain—who ends up being something of a geek himself, along the evil inventor line.

Jung is a talented writer whose storytelling never falters. Geeks, Girls, and Secret Identities thoroughly holds its own in this crop of suspense and secret identity books for middle grade.

First line: There are four Captain Stupendous fan clubs in Copperplate City, but ours is the only one that doesn’t suck.

Mike Jung wrote a funny and yes, geeky song about the book and being an author. Here’s a video of him singing it.

The Cloak Society by Jeremy Kraatz

This book reminds me a little of Mark Walden’s H.I.V.E. (Higher Institute of Villainous Education) and sequels as well as Catherine Jinks’ Evil Genius and sequels. It starts out with an explication about how super villains get their start and how tough it can be to be one. Normally I don’t like books to start with explication, but this riff is genuinely funny in a straight-faced, tongue-in-cheek way. 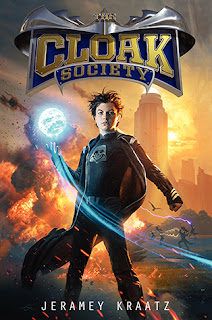 Alex was born into a family of super villains, members of a group known as the Cloak Society. He has been training all his life to ensure world domination and defeat the society’s archenemies: superheroes called the Rangers of Justice.

It’s time for Alex’s first mission, stealing a diamond called the Excelsior from an impregnable bank. He’s one of the young crew, Beta Team, assisting the older members of the society. All of them have super powers. Alex can create a blue light that he uses for telekinesis, but it doesn’t always work quite the way he wants it to. On this mission, Alex makes a nearly unforgivable mistake when he impulsively saves a young member of the Rangers of Justice from being killed.

Alex is punished, his loyalty is questioned, and he is put on probation for the forseeable future. Then he runs into the girl whose life he saved and begins meeting her secretly, telling himself he will recruit her and/or kidnap her in time. Only Alex is being tempted by the dark side, AKA the light side, depending how you look at it. And that’s not going to turn out well.

After reading the other two books I mentioned, I thought I might not get hooked in by a new one with a similar premise. However, Kraatz makes us care about Alex—about his sneaking around, his unacceptable soft heart, and his giant dilemma.

Secondary characters such as Alex’s sneery rival and a younger girl who follows Alex around like a lost puppy add to the mix, as do his tower-of-evil-power parents, especially his mother.

Join Alex on his coming-of-age journey as the scion of a family of super villains.

In this video, Kraatz talks about the book, growing up a comic book fan, and his internship at Marvel Comics.

The Secret Prophecy by Herbie Brennan

This one caught my attention because it’s by Herbie Brennan, who wrote an excellent series called the Faerie Wars. 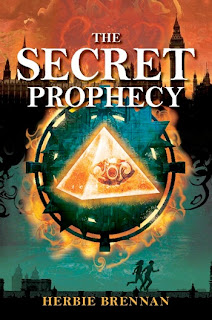 Em (E.M. for Edward Michael) loses his father, a scholarly geek who has been trying to find a lost prophecy of Nostradamus. At the funeral, Em sees strangers, including men with guns who begin to follow him. Then his mother is tossed in an insane asylum for no real reason, and his uncle Harold starts acting like he might be a traitor.

Em figures out that people are looking for his father’s notes on the lost prophecy. Together with a friend named Charlotte and the mysterious Victor, Em tries to find answers and evade his followers. He ends up going on the run, aided by Charlotte and Victor.

There’s a lot of chasing here, sometimes reminiscent of the Alex Rider books (the first one also starts with a death and strangers at the funeral). Trust me when I tell you that double and triple crosses are the name of the game in The Secret Prophecy.

I mean, why exactly does Victor want Em to break into a dangerous secret facility in the United States? Is Victor a good guy or a bad guy? Why should Em keep trusting him?

I liked Em, who acts from his gut, which often turns out to be right. Sure, he thinks through certain problems, but when action is required, he's already in motion.

The meaning and importance of the prophecy is also constantly in question. This is an old-fashioned chase-and-suspense book in a lot of ways, but it takes some new-fangled twists and turns that readers will appreciate. It’s clear that Brennan is a pro.

First line: The stairs were narrow, but Em was used to carrying the tray by now, so he managed not to spill the orange juice.

Note: Thanks to HarperCollins for sending me review copies of The Cloak Society and The Secret Prophecy. The latter will be available on October 30th; the other three books are already out.
Posted by KateCoombs at 8:25 AM

I'm so glad you mentioned Kate Messner. I heard about this book awhile ago, then forgot about. All of these are going on my wish list. I love a good heist book. They remind me of what books need to be: fun and exciting. Middle grade books seem to corner the market on both commodities.