Thrillers, chillers, and sci-fi, oh my! I am happy to announce that you can buy something other than a paranormal romance about vampires, werewolves, or angels at the bookstore these days. Here is a sampler of some of the latest YA.

This book builds in such great ways. Interesting, because the first eight chapters are merely leading up to what screenwriters fondly refer to as “the inciting incident.” Essentially, we get eight chapters of backstory. But those chapters dole out so many clues and character interactions and odd moments that it all comes together to begin to explain what Sara Jane has already told us will happen: her parents and her little brother disappear. 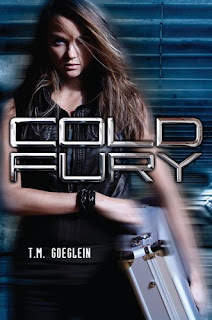 What do we need to know? Sara Jane is a boxer. Sara Jane adored her Uncle Buddy, but he wound up betraying her. Sara Jane’s grandfather and father are more than just bakers. Um, mafia? But that’s not actually the weirdest part. The weirdest part is that when Sara Jane gets a certain kind of angry, there’s a blue light and she has extra strength. Superpower? Kind of. It’s one of the family secrets. More secrets are hidden in a notebook that both Sara Jane and Uncle Buddy are after once her family disappears.

Unfortunately, Uncle Buddy and some dirty cops aren’t even the worst of her enemies. Fortunately, Sara Jane has friends, including a boy named Max that she wishes were more of a boyfriend, her boxing trainer Willy, and a thuggish dog named Harry.

Eventually we get a Sara Jane who is on the run with “a steel briefcase, and inside that briefcase is ninety-six thousand dollars in cash, an AmEx Black Card in [her] name, a SigSauer .45 conceal-and-carry, and an old leather notebook….” That’s about where the story starts, but only because the rest of the book turns out to be one long flashback.

The blue light thing almost seems extraneous because Sara Jane and her story are already so tough and surprising. But I’ll take it. And I’ll take the sequel about five minutes after it comes out.

First Line: “My name is Sara Jane Rispoli. Several short weeks ago, I turned sixteen. So far there has been nothing sweet about it.”

Don’t Turn Around by Michelle Gagnon

This book got four starred reviews, as well it should have. Don’t Turn Around is a wild and breathless ride. I’ve heard that YA editors are looking for thrillers these days, and this book unquestionably qualifies. For example, it begins with a street kid waking up to find herself on an operating table in an abandoned warehouse. What has been done to her, and how will she get away? The stuff of nightmares. Nice. 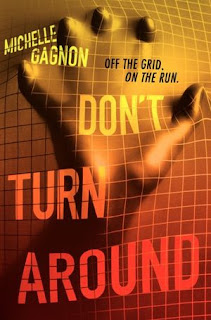 Noa barely manages to escape, and now she is being hunted. Meanwhile, a boy named Peter Gregory uncovers secrets on the computer that get his front door kicked in. The bad guys also shut down his underground website, ALLIANCE. Peter makes a deal with one of the vigilante hackers from his site—who turns out to be Noa, AKA Rain. With some help from his almost-ex-girlfriend, Amanda, and his other hacker buddies, Peter begins following the clues. They lead him back to Noa. Meanwhile, the people chasing Noa are getting closer and closer. A secret friend on the Internet gives Noa some support, but she’s afraid to trust him. Then things get really bad.

As the initial scenario implies, this suspense story has a medical issue at its core. You will find that the book is set in the future, though probably only 20 or 30 years from now.

Gagnon keeps the pace going relentlessly, which is just right for this book. And Noa, who has been in and out of foster homes and juvie, makes the perfect streetwise heroine. Peter is a little more white bread, but then, he’s supposed to be. His growing realization that, in the middle of all this drama, his girlfriend has moved on adds humor and pathos. It’s a relatively minor subplot, but it’s a good example of the complexity of the human interactions in a book that could have simply been one long chase scene. Well, it is that, but there’s a lot more going on here than cookie-cutter villains on black motorcycles.

I really liked Don't Turn Around. I think you will, too.

First Line: “When Noa Torson woke up, the first thing she noticed was that her feet were cold.”

The Dead and the Buried by Kim Harrington

This book begins with an excerpt from the diary of one Kayla Sloane. But Kayla is more the antagonist than the protagonist here. Our main character is a girl named Jade. Unbeknownst to her, the girl who used to live in her new home was murdered. Jade starts to get a clue when the kids at school act really weird, whispering about her as soon as she gets there. Then Kayla, who isn’t nearly as gone as one might hope, begins to haunt Jade and especially her little brother, Colby. Kayla makes it clear that if Jade doesn’t find out who murdered her, she will do something terrible to Colby. 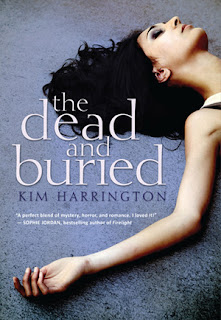 Jade uses her growing friendship with one of Kayla’s exes, Kane, to find out more about what happened to Kayla. But she’s already made enemies, and things don’t go quite how she had planned. Jade finds herself attracted to another of Kayla’s exes, troubled emo/geek Donovan. Half the kids in the high school think Donovan murdered Kayla, though apparently the cops don’t. Since Kayla fell down the stairs, it’s not entirely certain whether it was an accident or murder. Except that ghost Kayla says she was pushed. (I found myself wondering whether Kayla was making that up just to be cruel, since she was obviously a Mean Girl with a capital M-G. But no, it appears someone really did push her.) One problem for Jade is that a lot of people had reason to hate Kayla. And ghost Kayla is getting more and more scary.

Yep, this is a ghost story, though it’s also a murder mystery. Plus it's a romance and a bit of a stepdaughter-and-stepmother-work-out-their-differences tale. Harrington has a lot going on here, but she pulls it off. I did figure out who the murderer was about a third of the way through the book, but it was just a good guess: the author keeps the mystery mysterious till nearly the climactic moment. This is a satisfying story both because of the buildup of suspense and because Donovan and Jade make a sweet almost-couple who have a lot to deal with before they can settle in and enjoy their new relationship.

First Line: “I’m not stupid. I know half of them only worship me because they fear me.”

The Shadow Society by Marie Rutkoski

Darcy Jones is a high school student with three good friends: Lily, Jims, and Raphael. Abandoned when she was five, Darcy lives with a foster mother who cares about her and treats her well. Darcy loves art, and she’s talented at it. Life isn’t so bad until Conn McCrea shows up. Darcy is unwillingly attracted to Conn, who most of the time looks at her like she’s a poisonous snake. But why? 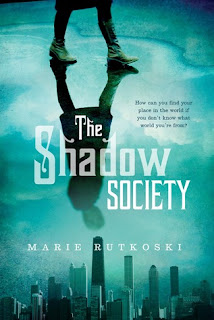 The answer is far more complex than Darcy—or readers—could have imagined. It involves an alternate world peopled by two very different groups. It involves betrayal, secret societies, random acts of kindness, and a Romeo-and-Juliet romance. I really enjoyed this fresh new sci-fi/thriller/romance, which didn’t surprise me because Marie Rutkowski is also the author of a very cool, dark, steampunk-in-Hungary trilogy, the Kronos Chronicles.

Besides, you gotta love a book that uses T.S. Elliot’s “The Love Song of J. Alfred Prufrock” as a thematic element. I’ve always liked that poem.

Of course, some of the plot points are a little more predictable than others. For instance, there’s a vertex on a romantic triangle that breaks apart before it even gets started. What really holds true throughout the book is the troubled relationship between Darcy and Conn. How do you trust someone whose entire purpose is to distrust you? Rutkoski takes this idea through some nice twists and turns. And no, her Romeo and Juliet do not wind up dead. This is the kind of story where the title is a play on words even though it doesn't seem like it at first. A shadowy and engaging read.

First Line: “Knowing what I know now, I’d say my foster mother had her reasons for throwing a kitchen knife at me.”
Posted by KateCoombs at 2:59 PM

The Shadow Society is on its way to me even as I type--I loved her mg series and have high hopes for this!