Have you heard about the new picture book coming out in October, Maggie Goes on a Diet by Paul M. Kramer? At the risk of adding to its "any publicity is good publicity" campaign, I thought I'd bring the book up. For starters, check out this news video from Yahoo. 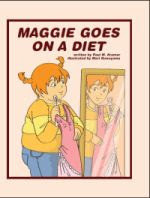 book is the story of a 14-year-old girl named Maggie who is overweight and is teased at school. After she goes on a diet and loses weight, she becomes happy and popular. FYI: The cover shows a fat Maggie looking hopefully at a skinny Maggie in the mirror (see image, left).

Apparently a lot of people are up in arms because the book is likely to make little kids self-conscious about their weight, but as a children's book person, I'm stuck on a more basic question: Why is a book about a teenager being written for and marketed to 6-year-olds?

And then there's the quality of the writing; um, it's in verse. Here's a sample: "Searching the refrigerator in hopes she would feel better/eating lots of bread and cheese including some cheddar." Make of that what you will, but I suspect Dr. Seuss is rolling in his grave!

So, what do you think of all the criticism? Not to mention how many copies this guy is going to sell as a result?

More to the point, can any of you recommend children's books about being overweight that aren't so annoyingly didactic? (Preferably not picture books, in the name of common sense.)

Update, 11-24-11: See also Eddy Shapes Up, the semi-autobiographical story of how a young Ed Koch went on a diet because of peer pressure and became thin and happy. Also a picture book, this time by the former mayor of NYC and his sister, Pat Koch Thaler, with illustrations by Jonathan Hoefer and an introduction by President Bill Clinton. This one appears to be more age appropriate, but is still didactic.
Posted by KateCoombs at 3:04 PM

So I watched the video and there is so much not to like about this but I have to say the writing would keep this book out of my house even without the other issues.

Bit is a tall and skinny girl (takes after her daddy). And very pretty. I always have to buy her pants that have those adjustable waists and we usually have to pull them in 3-4 button holes. Just to say she complains she is fat despite that. I wouldn't let her within 10 feet of this book.

I'll be interested to see if anyone comes up with titles. I can't think of any off the top of my head.

I remember reading BLUBBER (about weight and bullying) by Judy Blume when I was a girl. This is such a tough topic. A.

Blubber, right. Someone needs to write an MG book about this for today, one that's a real story, not a sermon! (Only not me--I'm all about sci-fi/fantasy.)

The Melting of Maggie Bean by Tricia Rayburn is a good one that I don't think is preachy.

Thanks, Katie! I'll look for that one.