A Review of Sparrow Road by Sheila O'Connor

Raine O'Rourke has no idea why her mother has dragged her off to spend the summer at an artist's colony, and she's not happy about it. For one thing, she misses her grandpa. For another, it seems strange that her mother has volunteered to be the cook, and apparently Raine shouldn't be there at all—at least according to the most cranky of the artists. But the other artists take Raine under their wings and she begins to have fun, even if her mother is acting particularly nervous and doesn't want Raine to go into town at all, ever. 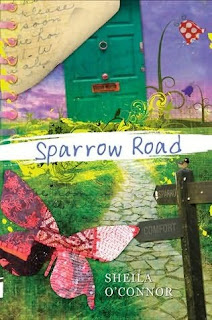 This book has a colorful cast of adult supporting characters, beginning with Viktor, who owns and runs the place. He is silent and seemingly cold. One rule of the colony is that no one is allowed to speak during the day so that the creative types can concentrate. Of course, this is not an easy rule for Raine to follow. Fortunately, Viktor makes an exception for Raine and poet Lillian, who is a little senile and clearly used to live at Sparrow Road when it was an orphanage, perhaps as a teacher.

Diego is a painter who incorporates found objects into his work. He encourages Raine to dream and takes an interest in Raine's mother.

Writer Eleanor is a curmudgeon who complains a lot about Raine, providing a counterpoint to the other artists' kindliness.

Quilt-maker Josie is a huge, loud personality who quickly befriends Raine and brings the girl out of her shell with her sheer enthusiasm. She takes Raine into the forbidden town for treats and invites the town out to Sparrow Road for an art show. Here's Josie:

Suddenly Josie marched into the kitchen, her long, sure steps reminding me of the cowboys in the westerns Grandpa watched. Except in place of cowboy boots, she had on men's black work boots, big and clunky, with heavy silver buckles that jangled when she walked. Her dress looked like a patchwork sack of scraps. A nest of neon braids framed her freckled face.

"We have a brand-new orphan," Lillian said.

"Fabulous," Josie cheered. "We need more orphans at this place." A wide gap flashed between her two front teeth. She gave my hand a forceful shake. "So you must be the long-awaited Raine O'Rourke."


As for Raine's mother, Molly, she is keeping secrets. For one thing, Raine's mom used to sing and play guitar: why did she stop? And how did she meet Viktor in the first place?

Raine is determined to uncover her mother's secrets, and the secrets of Sparrow Road, too. The orphans have left a few signs of themselves behind. A picture drawn by a boy named Lyman inspires Raine to make him into a sort of imaginary friend. As she talks to him about his lack of parents, her own missing father becomes a more important figure in the plot.

Inspired by her new friends, Raine is infused with her own sense of artistry and ends up writing a piece about Lyman which she reluctantly reads at Sparrow Road's First Annual Arts Extravaganza. I found myself wondering whether Lyman was Raine's alter ego. Though I have to say, I would have liked to hear more about Lyman the orphan. He deserves his own book.

Despite the lack of overt magic, there's a bit of a magical realism feel to O'Connor's tale. That is, there's something a touch surreal about Sparrow Road. The setting reminds me of Mary Lennox' secret garden or that magical attic where Sara Crewe discovered that after all of the horrible things that had happened, someone still loved her.

Little by little, Raine flourishes in this odd setting, finding the answers to most, if not all, of her questions. Raine learns to dream herself into someone else's world and even to forgive the ones who need it most. Like Raine, I'll think you'll be happy to spend some time in the town aptly named Comfort, particularly in that cozy nest of an artist's colony, Sparrow Road.

Note for Worried Parents: There's some talk of alcoholism and an (implied) unwed mother in this book, but it's all handled with grace and wisdom.

Check out Sheila O'Connor's Sparrow Road page on her website for some rave reviews.

Posted by KateCoombs at 2:06 PM