A Review of The Pocket and the Pendant by Mark Jeffrey

This is one of those sci fi/fantasy crossovers: it has aliens, but it also builds on Sumerian creation myths. In fact, one mentor-type character explains that magic and science are really the same thing. But ultimately, I would say Mark Jeffrey's new book is more of an action/adventure story than anything else. 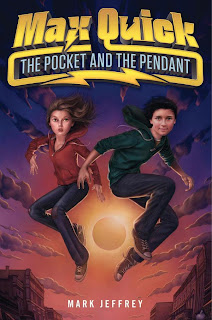 Max Quick is fleeing from the abusive head of an orphanage in a California coastal town named Starland when he less-than-coincidentally runs into a museum to hide and encounters Johnny Siren, who has super villain written all over him:

He was dressed in an impeccable suit, with long black hair slicked back and pulled into a ponytail. He carried a black iron cane that terminated in a golden claw. This claw gripped a ruby the exact color of blood from a fresh cut.

But it was the man's face that shocked Max the most.

It was white as salt.

Max winced involuntarily as he realized the man's skin was covered in scars. They crisscrossed his cheeks, his neck, and his hands as though he had once been flayed by millions of miniature whips.

Worthy of a Bond villain, no?

We're off to a good start!

Then suddenly Time stops—or it stops for everyone in town except for Casey and Max, who eventually meet up and compare notes.

In a scientifically precise moment, Jeffrey lets us know that Time hasn't stopped so much as slowed almost all the way down. This means that Casey and Max can move at near-super speeds, and they play with this ability, naming it whooshing. Casey is afraid of whooshing in a very girly way, but at least she's the one who's good at pulling ordinary objects out of stopped time, so that, for example, food can be eaten. The author's attention to this sort of detail is intriguing.

The two kids see some flying saucers, only the saucers look like something out of that museum Max visited earlier—they are "made of obsidian and sandstone and covered with jewels." Max suspects, based on what he overheard from Johnny Siren earlier, that the man has made a deal with an alien queen named Jadeth. (She may remind you a little of Jadis, the evil queen in the Narnia prequel, The Magician's Nephew, and not just because of the name.) Max and a more reluctant Casey decide to go east to track down Johnny Siren and find out what's going on.

On the way, they encounter a town with an entire gang of kids who are also outside time. These kids have set up a mini society in which they use their new super abilities to fight and show off; their leader, a boy named Ace, is a bully. He threatens to set up a hunt with Max and Casey as prey, but one of his crew, Ian, frees the two instead using a magical Book.

Inside the Book, our heroes find themselves in Johnny Siren's abandoned mansion, where they discover new mysteries. They almost lose Ian to wolves, as well.

But the real mystery here is Max, who seems to have no past. And what about Casey? She has a secret of her own. As our duo—now trio—closes in on the answers, they must fight to stop Jadeth's plans to enslave the entire human population.

Jeffrey has some things to say about free will and destiny in this book, and in certain spots his explication about these issues and various slices of backstory create a bit of drag. I would have liked to get a better sense of Casey's character, too; I found Max to be much more accessible than his girl Friday. As for the ending, I thought the solution to the Jadeth problem was a little strange, with just a touch of deus ex machina.

However, Rick Riordan's books suffer from the same problems on occasion. Like Riordan's books, The Pocket and the Pendant is mostly a fun, fast-paced adventure that kids are really going to enjoy. The whooshing, the apparently skater-inspired kid society, the abandoned farmhouse, and the arrogant villains all add up to a lot of satisfying action and suspense. I look forward to seeing what happens to Max Quick in Book 2.
Posted by KateCoombs at 4:49 PM

Kate --
Just found my way to this via various Google alerts I have set up :) THANK YOU for taking the time to read the book and write this review!!! Very very appreciated!!
- Mark Jeffrey

You're very welcome, Mark. The book is an auspicious beginning for Max!