A Review of Beautiful Creatures by Kami Garcia and Margaret Stohl 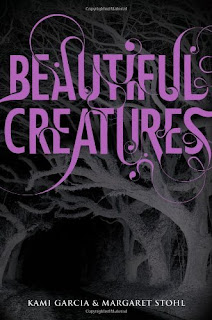 Beautiful Creatures is another YA that seems to be have been inspired by Stephenie Meyer's Twilight, but Garcia and Stohl do some interesting things with the concept of star-crossed paranormal soulmates.

Here the Bella character and narrator is played by a boy, Ethan Wate, who lives in a tiny Southern town called Gatlin. Ethan is drawn to the new girl, Lena Duchannes, though the rest of the kids at school and indeed the entire town quickly deems her socially unacceptable. Aside from her artsy goth-punk style of dressing, Lena is the niece of the sinister Old Man Ravenwood, a recluse who lives on a large plantation-turned-estate on the edge of town. Lena is also very beautiful, dark-haired and green-eyed. She's the Edward character in this novel, of course.

And even before she moves to town, Ethan is dreaming of her. In his dreams, he is saving Lena from falling.

So, despite the warnings of both his peers and his elders and even the girl herself, Ethan seeks Lena out. Together, they begin to investigate the history of an earlier pair of ill-fated lovers, a couple who lived during Civil War days. Ethan learns that while he is merely a Mortal, Lena and her family are Casters, a type of witch or wizard. And when Lena turns sixteen, she will either turn light or dark. It seems she won't have much choice in the matter. Even so, her cousin Ridley and her estranged mother are making trouble, hoping to pull Lena toward the evil side of the equation. But Lena's unusual connection to Ethan surprises everyone, and might even confound her fate.

This series start contains predictable elements such as the gorgeous mean girl at school, dark talismans, ancient books full of secrets, and what has recently become a trope: the human-friendly family of witches/vampires/werewolves (AKA Cullens) who are trying to defeat their evil, human-hating counterparts. But what kind of YA paranormal would it be without some of those elements, I ask you?

Lena makes a good doomed-or-is-she-really love interest, and Ethan is a likable narrator. Here he tells what happens when he tries to bring Lena to sit with his friends at lunch:

If this was a movie, we would've sat down at the table with the guys, and they would've learned some kind of valuable lesson, like not to judge people by the way they look, or that being different was okay. And Lena would've learned that all jocks weren't stupid and shallow. It always seemed to work in movies, but this wasn't a movie. This was Gatlin, which severely limited what could happen. Link caught my eye as I turned toward the table, and started shaking his head, as in, no way, man. Lena was a few steps behind me, ready to bolt. I was beginning to see how this was going to play out, and let's just say no one was going to be learning any valuable lessons.

The teens act and talk like teens, and the story flows nicely. I especially liked how these authors used nasty small-town gossip to fuel plot twists, later tying that destroy-by-grapevine campaign to another subplot in surprising ways. The town's secret paranormal library and its librarian are another fun touch. YA readers looking for a follow-up to the Twilight books might just find themselves hooked by Beautiful Creatures.

Note: I requested this book from the Amazon Vine program.
Posted by Kate Coombs at 1:42 PM