A Review of Spellbinder by Helen Stringer

Like the rest of her spiritually gifted family, Belladonna Johnson can see ghosts, so when her parents die in a car accident, they don't actually leave—they just keep living in her house. They can cook for her, read the newspaper, do all the parental things except taste the dinner for spices and give her hugs. Her grandmother pretends to be her guardian by stopping by on a regular basis, but really, things haven't changed much at all. Except that 12-year-old Belladonna has trouble telling the difference between ghosts and non-ghosts, so she's deathly afraid of slipping up and talking to ghosts in front of her peers.

So begins this clever new book from a British expat living in Los Angeles. (Spellbinder is clearly set in England.) Only the humor slips away a bit, leaving us with a darker tone, when all of the ghosts in town start to disappear. Right before he goes, Belladonna's dad tells her to call her aunt, but uptight Deirdre refuses to explain anything to Belladonna. Her grandmother also underestimates Belladonna, who naturally takes matters into her own hands. 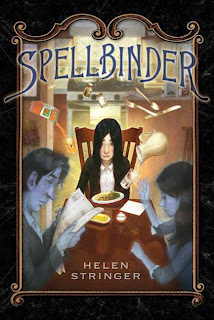 In this she is assisted by Steve Evans, a kid who is constantly getting in trouble at school thanks to his exceedingly creative exploits, and by Elsie Blaine, the only ghost who has managed to escape the mass disappearance. Well, there is one other ghost still hanging around on the Other Side, as Belladonna and Steve discover when they manage to find the last door and get over there. He is the sinister alchemist Dr. Ashe, who tells Belladonna and Steve to find a missing amulet in order to solve the ghost problem. But he doesn't seem particularly trustworthy, so what does he really want?

Stringer uses some familiar tropes, such as the young person with a powerful mission who doesn't know her own special destiny and appearances from evil spy ravens, hellhounds, oracles, and the Wild Hunt. I was also faintly reminded of Jodi Lynn Anderson's Maybird and the Ever After because of the whole chthonic theme and setting. (I love that word!) But the author manages to infuse Spellbinder with freshness thanks to her strong way with words, her appealing characters, and some clever plot twists. For instance, the location of the missing amulet, let alone how Belladonna and Steve must retrieve it, is original as well as hilarious.

Belladonna is a likable heroine, one of those shy kids who just hopes not to be noticed—even if it is because she can see ghosts. Stringer's school scenes are handled deftly. The kids go on a field trip to Arkbath Hall, and the author perfectly captures what that's like. Here's a sample:

They stopped in front of a massive black gate, and Mr. Watson pressed the doorbell. He turned and looked out over his charges, suddenly nervous.

"Now, I want—for God's sake, Evans, give the boy his glasses back!—I want you all to behave yourselves.

Arkbath Hall was built in the late fifteenth century—"

"Sorry? Yes, very good, Johnson, the late sixteenth century. Quite right. Anyway, it's very old, so I don't want any of you touching anything. Is that clear?"

Twenty-eight dreary voices said, "Yes, Sir," in unison, though not one of them sounded even remotely like it had heard what Mr. Watson had said.

He looked at their faces as their attention wandered to the building, the
grass, and the snail on the path. Belladonna suspected that in his quiet hours Mr. Watson despaired for the future of their country.

Stringer's humor gives this often dark book a surprisingly light touch. For example, as the above scene continues, the guide at the castle, who I should point out manages not to be a flat character, tallies up the students using a counter, leading Belladonna to wonder why he needs "a mechanical device to count to twenty-eight."

Later we get the daunting headmistress, Miss Parker, who has a buzzer and little lights outside her office door—

The green one said "Enter," the orange one said "Wait," and the red one said "Busy." According to Steve, if the red one came on when you knocked at the door, then you could go back to class, and sometimes she'd forget all about you.

It's touches like these that really bring the book to life.

Belladonna's accomplice Steve is one of the best characters in the book. I've seen a lot of roguish lads in this kind of story, but he comes across as more of a curious, bright kid than a troublemaker, though his troublemaking talents enable him to be a great help to Belladonna. The interactions between Steve and Belladonna ring so true that this duo seems more real than many other such teams in children's fantasy.

Another colorful character, Elsie the ghost girl, died playing tennis at the school a century ago (the story of her death is very funny). She and Steve instantly clash. Elsie is one of those exasperatingly chirpy girls, yet she turns out to be helpful as Belladonna and Steve move forward with their quest.

Some of Stringer's inventions work better than others. I was a little uncertain about the charnal sprites, but they do play a key role later in the book.

The Wild Hunt brings up a mystery involving Belladonna's aunt, one that will obviously be addressed in the future. We are also left wondering about Steve's mother and even the true identity of the headmistress. Stringer further hints at the existence of a mastermind overseeing the villain featured in this debut book.

Spellbinder is a first novel and every once in a while it shows, but I really like this book, which besides being funny and adventurous is simply a well-told tale. I was pleased that it ended thoroughly, even while hinting at a sequel. For middle grade fantasy enthusiasts, Spellbinder is a real find.
Posted by Kate Coombs at 7:30 AM

I really enjoyed Spellbinder. I loved the dialogue and friendship between Belladonna, Steve and Elsie. It felt natural and unforced.

Doret--Yes! And although this shouldn't be a rare thing in children's books, I'm afraid that relatively speaking, it is. So much of the dialogue I come across seems self-conscious and unnatural, even scripted.