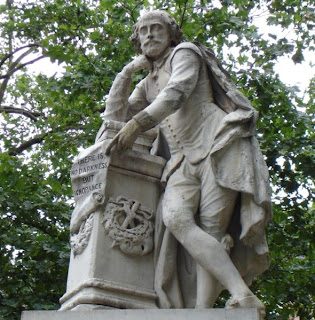 I hope you're imagining my index and middle fingers held up together, slightly crossed, to accompany the header. So the point is, I'm going on vacation! Yes, I might even see a few of the Book Nieces and Nephews. But what I will for sure be doing is going to a Shakespeare festival in Southern Utah. (With my mom, who is a history and literature buff, also delightful company.) I've always wanted to go, but never got around to it. Now, we're talking six plays in three days! Plus various other travels.

Therefore, I will not be posting next weekend.... But never fear, I'll be back the following week, just in time to host Poetry Friday on August 27. Perhaps I should post a Shakespearean sonnet or two!
Note: If you want the real skinny on the bard, try Bill Bryson's book, Shakespeare: The World as Stage. Bryson debunks all kinds of rumors and myths surrounding the great playwright as he shares what really is known. The answer? Not much! For instance, not one of those portraits of Will you see here, there, and everywhere has been truly authenticated. Bryson's book is surprisingly slim (see "not much" above). He also has a thoroughly likable, readable style.
Update: I have to say, the bard still rocks! Kudos also to the Shakespearean Festival in Cedar City for putting on such stunningly good productions of Macbeth, Much Ado about Nothing, and Merchant of Venice (along with other, non-Shakespeare plays). Merchant of Venice in particular was so, so moving, between Shylock's performance and the way the production addressed anti-Semitism. Wow!
Posted by Kate Coombs at 10:50 AM

Kate, Poetry is healing in more ways than one, and your students are fortunate to have you, a teacher who recognizes this. Thank you for the fabulous list of books. I plan to link to it. Today I have #14 in my series of poems about poems - "Love Me Real". You can find it here - http://poemfarm.blogspot.com/2010/08/poetry-friday-149-love-me-real.html