A Review of The Shadow by Donna Diamond 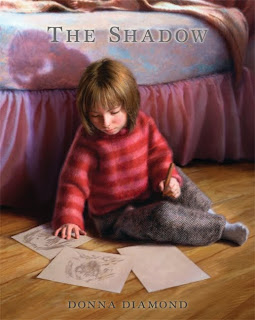 I've been watching with interest the rise of the paranormal in YA and its trickle down into middle grade fiction and picture books. Yes, the Twilight effect, like its predecessor the Hogwarts effect, is a powerful thing!

But so far, most of the creepy supernatural stuff has hit intermediate books rather than picture books. The horror picture books we've seen are mostly funny, though Bobbi Katz and Adam McCauley's The Monsterologist: A Memoir in Rhyme and Ryan Heshka's ABC Spookshow and just-published Welcome to Monster Town might be a tad darker, if only because of the illustrations.

None of them have been as scary, or as subtle, as The Shadow, a new picture book from illustrator and fine artist Donna Diamond.

I'll give you the product description first so you can see how the publisher is presenting the book:

A young girl confronts her fears in an eerie, wordless picture book featuring stunning, hyper-realistic illustrations. It’s an ordinary afternoon. A child comes home, heads upstairs, and sprawls on the floor to do some drawing under the watchful eyes of a pair of favorite dolls. But there’s another character in this wordless story: the shadow, unnoticed at first, then slowly creeping into her field of view. It’s a terrifying sight. Will the girl cower, or will she take on this shadow and tell it who’s boss? And where will the shadow go from there? With mesmerizing intensity, this dreamlike story tells an unflinching tale about recognizing and staring down one’s fears—if only for a time.

And this is from Donna Diamond's website: "The Shadow is a suite of seventeen paintings that tell a story. The pictorial narrative creates a psychological drama about fear, how it grows in the dark, and takes on a life of its own."

In these beautiful paintings of a girl going upstairs and playing in her room, you will probably notice the child's shadow before she does. It doesn't match. It is a Halloween shadow with two spaces for eyes. (Look closely at the shadow to the girl's left in the cover image above.) At first it just follows the girl, like an ordinary shadow. But up in her room, it looms over her threateningly.

Finally the girl, who appears to be about seven years old, sees the shadow and responds. After her initial shock, she gets tough and subdues the shadow, which is rather heartening. She even drives it away—or does she? As she goes to sleep, we discover that the shadow has secreted itself in a traditional shadowy spot, where it continues to lurk.

The Shadow is a really gorgeous book, and it's like nothing else out there. My only question is, who is it for? Although I can see having a conversation with a child about the shadow as a symbol for fear, I'm thinking kids aren't much for symbolism till they're a bit older than the target audience, perhaps even in middle school.

Much as I appreciate the way the child defeats the shadow, Diamond goes with a horror-movie ending—the shadow, like Freddie Krueger or Jason, is still there, waiting for another chance at our young hero.

Sorry to say, I can see this book giving first graders nightmares. The very realism of the paintings makes this book's terrors more believable than those illustrated in more cartoon-like or stylized picture books.

I will add that the fact that The Shadow is wordless completely suits the story, but again skews the audience a bit younger than might be sensible. (Interestingly, while Candlewick lists the book for ages 5-8, Amazon lists it for 9-12.)
My recommendation would be, if your 6- to 8-year-old blithely watches horror movies and reads the Goosebumps series with gusto, look for this book. If your kid is the sensitive type, maybe not.

But you might enjoy taking a look. Donna Diamond's The Shadow is unique—and chillingly lovely.
Note: Check out the website Kinderscares for more scary books for young readers, including some picture books.
P.S. Aha! I've thought of another sincerely scary picture book: poet Eve Merriam's Halloween ABC or (retitled) Spooky ABC, illustrated by Lane Smith. Beautiful poems, but truly creep-worthy. The book is often recommended for older kids and has even been banned on occasion. (Let's all shiver in unison!)
Posted by Kate Coombs at 9:09 AM

Oh my gosh, I am so tempted to try this out on my seven year old....but I think I will try hard not to. That is one scary sounding picture book!

Ha. Yes, you must RESIST your inner mad scientist!

I have definitely noticed the rising amounts of paranormal children's books. This one in particular sounds pretty creepy, but I really want to see it for myself!