A Review of Zombiekins by Kevin Bolger 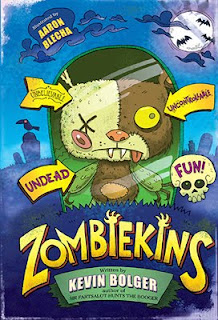 It had to happen. First there was the vampire wave, then the werewolf wave, and then the zombie wave. (Pride and Prejudice and Zombies, anyone?) I valiantly resisted the onslaught of rotting flesh and eyeballs drooping like little dead Slinkies when it hit the YA market harder than a metric ton of brain goop, but I could no longer resist when it struck middle grade fiction—I had to take an anti-nausea pill and read a few of the new books.

Starting with Zombiekins, written by the man best known for his dashing knight, Sir Fartsalot of Sir Fartsalot Hunts the Booger fame. For those of you who worry about finding books for reluctant boy readers, look no further!

Here are the first few paragraphs of Bolger's new book:

The little town of Dementedyville was a tidy, uneventful town. The sort of place where home owners took care never to let their well-tended lawns become overrun by unsightly weeds or children, and birds sang in all the trees—but only between the hours of nine and five, as per the town's bylaws.
But even in Dementedyville there was one house that stood out from all the others....

Next we see the neighbors storming the creaky old home of Mrs. Imavitch with pitchforks and torches—to attend her yard sale.

At the sale our boy Stanley buys an odd stuffed animal called Zombiekins. Mrs. Imavitch is so pleased by his choice that she gives him a bunch of taffy with a twinkle in her eye and reminds him to read the new toy's instruction manual.

But our author knows boys: when he gets home, Stanley instantly discards the box and the instructions. His little sister takes an uneasy interest in Zombiekins, who is invited to attend a tea party with stuffed animals like Whimsy the Pfoo. "Hugs are cuddle-wonderful...Have a huggsy-wuggsy day," Whimsy says. You just know he's going down, along with Bolger's Barney and Elmo clones.

Stanley's dog, who appears to be smarter than Stanley, tries to warn the kid, but he doesn't listen. Naturally!

Of course, the fun's only beginning, because the next day Stanley takes Zombiekins to school and his teacher, Mr. Baldengrumpy, puts on a movie about the moon. Pretty soon Zombiekins is stalking through the school, turning sixth graders and kindergartners alike into zombies. Chaos—and hilarity—reign. Plus a bunch of delightful satire about school and bullies and such. For example, when Stanley's best friend Miranda tells a teacher the kids are zombies, we get this:

"Now, Miranda," Mrs. Plumdotty replied, "you know it's not nice to call the other children names."
"No, you don't understand," Stanley hurried to explain. "She means they're flesh-eating monsters who want to guzzle our livers and gobble our limbs!"
"Stanley, dear, don't be such a tattletale," chided Mrs. Plumdotty.

As you can see, Stanley and Miranda are running around the school trying to find Zombiekins and stop the zombie kids, or at least not get bitten by them.

Zombiekins is a funny and satisfying read, nicely illustrated by Aaron Blecha in a clean, cartoonish style. The Zombiekins character alone is a visual and visceral triumph. Watch out for Book 2!
(You can visit the Zombiekins website here.)
Note for Worried Parents: This is pretty goofy stuff, despite the horror elements. I wouldn't worry too much. Any kid who might be bothered by all this probably wouldn't touch the book in the first place. Now, I'm not implying you should leave out girl readers—I think they'll like Zombiekins, too. They might make faces, but then they'll laugh. A lot.

Kids in grades three through six are probably the best audience for this one.
Bonus: I've yet to read Sir Fartsalot, but I did watch this very funny cartoon short, also by Bolger and Blecha, Sir Fartsalot vs. the Dragon. Check it out for some fartastic humor!
Posted by Kate Coombs at 8:57 AM

It's a nice, comfortable blog you have here! You know, just yesterday, I heard about this book and I've been looking around to see if it indeed is interesting. Judging from its cover (which, according to proverbs, that should be a horrible thing to do), I really like its pictures, and the story itself I think is so creative. I never heard of any zombie books for children before. :-)

...Oh, well. I never judge book by its intended gender. If it's good, even if it's for children, I'd love to read it. So, just want to make sure before I make a hasty choice, do you personally think this book is good?

ES--Thanks for stopping by! Horror isn't my favorite genre by a long shot, but I did like this book. It's clever and tongue-in-cheek, and the horror is mild and spoofy rather than blood-dripping and heart-pounding, as it would be in true horror books for grown-up readers. If you like books for younger readers and send-ups of genre fiction, you might like this one, too. (See also Attack of the Fluffy Bunnies for a similar take on B sci-fi movies of the alien invasion variety.)