A Review of April and Esme: Tooth Fairies by Bob Graham

I'll admit that I wanted to get ahold of this book partly because I have a picture book about the Tooth Fairy pending publication (waiting, waiting, waiting for an illustrator!), and I wanted to check out the competition. But that reason is secondary to a really important one, which is that April and Esme: Tooth Fairies is by Bob Graham. In case you aren't familiar with his work, here's my review of his beautiful book How to Heal a Broken Wing. I also like Graham's "Let's Get a Pup!" Said Kate—and not just because the girl is named Kate and the mom has a tattoo and a nose ring. (Trust me, they're the sweetest characters!) 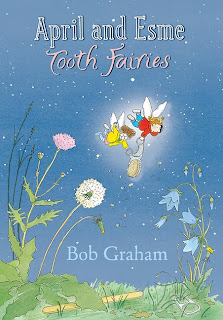 Now, April and Esme Underhill are the children of Tooth Fairy parents, living in a tiny house nestled against a tree stump. Imagine seven-year-old (and three quarters!) April's surprise and joy when she gets a request for a tooth pick-up, her very first. What's more, she's going to bring her little sister Esme along. At first her parents say no, but they gradually come around, and the two girls are off on a splendid adventure, carrying a coin in a mesh bag as they fly across the countryside and into the suburban home where one Daniel Dangerfield is sleeping. They make the money/tooth exchange, though not without incident, then wing home in triumph.

This story is pretty simple, but it's just so lovely, and there are two reasons for that: first, Bob Graham's text shows a rich awareness of how real people, especially real children, talk and act. For example, April gets the tooth request on her cell phone, and when she hangs up and her dad asks what the call was about, she replies, "Don't say anything, Daddy... We're collecting a boy's tooth tonight, and I have to write this down." Later, when she and Esme reach Daniel's house and are wondering where his room is, they decide their best bet is to follow the trail of toys. Look also for a funny moment in Daniel's grandmother's room.

The other reason April and Esme is so very nice is Graham's endearing artwork. It's hard to believe his illustrations can be so darn cute without being overly sentimental. Watch for mundane yet clever details: the teeth swinging from the ceiling of the Underhills' cottage, the way Mrs. Underhill takes a bath in a (human sized) teacup and plays a game with her winged children using her blow dryer, also the fact that the toilet is apparently made from an egg cup. (I think the sink is a thimble.) As always, Graham's characters are sturdy and ordinary looking, though here they have the minor addition of wings. Even the family dog has fairy wings!

Graham understands that real life is just a bit grungy, so his cover art, while it shows the two little girls flying through the night above some flowers, includes a popsicle stick and a soda can tab amongst the dandelion leaves and grass. Plus the kids' clothes are slightly mismatched and askew.

This small team runs into a surprising difficulty during the tooth retrieval, but April handles things with perfect logic and even panache. Upon their return home, the two fairy children are greeted with lots of hugs, and we get a hint about the eventual fate of the teeth that have been collected. Graham makes an interesting decision on the last page: he ends the story with a wistful, wide-angle glimpse of the little cottage dreaming on its hill. The language in this brief epilogue sounds like something out of a fairy tale... Which only makes sense.

I think what I like best about Bob Graham is how lovingly he portrays families—and what loving families he portrays. Whether they're adopting dogs, rescuing hurt pigeons, or flying around at night collecting baby teeth, this author-illustrator's families somehow manage to be more warm and caring than the families in all the other picture books combined.

You really should discover Bob Graham's work.
Posted by Kate Coombs at 8:35 PM

Oh, Kate! Bob Graham is one of my absolute favorites! Do you have "THE TROUBLE WITH DOGS..." SAID DAD? If not, it takes place a few months after LET'S... I keep waiting for the "Mom" book which surely must follow. I also love CRUSHER IS COMING and ROSE MEETS MR. WINTERGARTEN. I love Bob for the same reasons you do. So much love. Thank you for this new book which I will order right now. A.

Yay, a fellow Graham fan! I DO have "The Trouble with Dogs..." Said Dad. But I need to look for Crusher and Rose. Enjoy April and Esme!

Oh...I just can't wait for it to come in. When I am reincarnated, I want to BE Bob Graham. A.