A Review of The Invisible Order Book One: Rise of the Darklings by Paul Crilley

Most people don't have the Sight, but 12-year-old Emily does. The place is Victorian London, and Emily is selling watercress in the streets to support herself and her younger brother now that their parents have disappeared. Then she takes a shortcut down an alley just in time to see a battle between two groups of fairy creatures. After she helps a wounded straggler named Corrigan, she finds herself sucked into the ancient war between the Seelie Court, the Unseelie Court, and a secret order of humans founded by architect Christopher Wren to hunt them both. 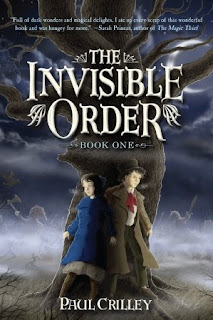 All three groups try to use Emily, and all three tell her lies—or insufficient truths. It's up to Emily and her sometimes irritating, larcenous friend Spring-Heeled Jack to sort out what's real and save London from a fae invasion.

This is dark fantasy, with monstrous fairy folk and humans who are equally horrible. Mr. Ravenhill of the Invisible Order is utterly ruthless, as are the Unseelie King and the Seelie Queen. The Unseelie King sends out Jenny Greenteeth and Black Annis, who lurk in the Thames devouring children. The Seelie Queen's servant, a soul-sucking black slug of a cloud called the Sluagh, is even worse.

But Crilley does leaven his tale with humor. Emily is a rather stern little soul, but Spring-Heeled Jack is a joker, practically a trickster. We also meet a clan of gnomes who live beneath the city, imitating the Victorian upper-class with amusingly mixed results. Oddly enough, Jenny Greenteeth and Black Annis are kind of funny—in a way the Grimm Brothers would have appreciated.

"You can't escape us, Emily Snow. As soon as you touch water, we know where you are. But even on land, we'll catch up with you in the end. We need something personal, of course. Blood's preferable, but hair will do. How does it taste, Jenny?"
"Like fear, Miss Annis," replied Jenny. Lovely, juicy fear, ripe for the bursting."
"Bless her," said Black Annis to Emily. "She likes the taste of fear, don't you, Jenny?"
"I do, Miss Annis. It makes me shiver."
"Right," said Black Annis. "Come along. Before that wretched sneak Ravenhill thinks to check out the back." She turned and set off down the dark street, the two sacks thrown casually over her shoulder.

(The sacks contain Emily's friends Jack and Corrigan, whom the two creatures have just snatched.)

There are fight scenes along with a solve-the-riddle prophecy, and Emily is one of those Chosen One-type kids, but these plot machinations sometimes seem less important than the atmosphere of the book, which is satisfyingly colorful, as long as your color palette consists of shadow black, chilly midnight blue, and bone white. Crilley has created a goosebump-inducing version of Victorian London, with grotesque fairy creatures filling in for the likes of Jack the Ripper.

The adventure moves fast enough to please young readers. Slightly quaint chapter headings include a "ticking clock" time frame, which contributes to the sense of motion, e.g., "Chapter Eleven: In which the All-Seeing Eyes watch Emily. A magical artifact stolen from Merlin. Inside the Royal Society / Four o'clock in the afternoon on the first day of Emily's adventures." (By the by, the way the fairies use unsuspecting Londoners' glass eyes is one of Crilley's best touches.) After a lot of chasing, capturing, escaping, and riddle solving, Rise of the Darklings ends with a battle and a bang, as Emily makes a choice that solves the book's central problem even as it propels her into a new, sequel-worthy adventure involving time travel.

If you like this one, try Charlie Fletcher's Stoneheart trilogy for a more modern but equally dark and uncanny adventure in the great city of London. Or take a look at China Mieville's Un Lun Dun.
Note for Worried Parents: This book is for middle grade readers (9-12), but it's a little scary. Generally speaking, I would recommend it for the older end of the MG spectrum.
Also: I requested this book as an ARC from Amazon's Vine program.
Posted by Kate Coombs at 10:28 AM