A Review of The Witches' Kitchen by Allen Williams

A lot like the museum in Lian Tanner's Museum of Thieves (reviewed above), the kitchen in Allen Williams' book is a sprawling, crawling land of monsters and surprises. But I guess that's what you might expect from a witches' kitchen! 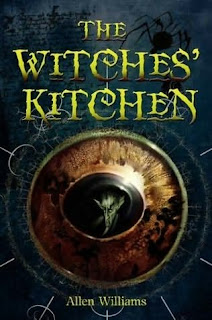 Our story begins with a wonderful in medias res scene as two witches prepare to drop a struggling toad into a cauldron bubbling with a spellful brew. Only it's not really a toad, or not just a toad... With a little unexpected help from a bird made of bones, the Toad escapes into the depths of the Kitchen, where she finds both new threats and help.

For example, an odd creature called Jack (short for Natterjack) offers to accompany her on her journey as she attempts to find her way out of the Kitchen, and a fierce little sword-wielding fairy warns her against a monster in a seemingly quiet well. The creatures in this book would fit nicely in a Fellini film or a Hieronymous Bosch painting; author Williams creates a nightmare grotesquerie to populate the Kitchen landscape. For example, here's the monster the fairy tells the Toad to watch out for:

A serpentine Form ran beneath the water into the darkness above, covered in reptilian scales that shimmered with a dull bluish glow, which was the only reason that she could still see its upper body, which stretched far above her, beyond the normal range of her night sight. At its midsection, it became segmented like an insect and at the intersection of each segment there was a long thin pair of arms ending in a single wickedly sharp barb. At the top, there were two longer, stronger arms.
These did not have hands...they had meat cleavers.

Ig-trolls, demons, skeletal birds, a giant dreaming man who has become both a landmark and an oracle—Williams has created an amazing dark world through which the Toad must navigate. The fact that all of this takes place in a kitchen just adds to the surrealism. And of course, the Kitchen tends to shift and change shape.

Then every so often, we get a chapter which shows us what the two witch sisters are doing as they search for the missing Toad and try to complete their spell. Think of the aunts from James and the Giant Peach, only with magic, and you've got a pretty good idea what Serafina and Emilina are like. (One of the more subtle touches in this book is the way the witch sisters interact with each other.)

Early on, it is obvious that the Toad is under a spell, so it shouldn't surprise you that she not only exhibits unexpected magical powers, but has a history which she eventually recovers. In the meantime, there are battles to be fought and evasive action to be taken.

The Witches' Kitchen feels a little inconsistent, occasionally bogging down in explication. But it is definitely innovative, and many of the details and adventures in the Kitchen make this book worth the read. As a bonus, it has appropriately ghoulish illustrations scattered throughout, also created by the author.

I've noticed lately that more and more children's fantasy is being colored by the flood of paranormal hitting the market. In other words, the fantasy being written today, even for middle grades, feels darker, more horrific, and more perilous than much of the fantasy that was written for past generations. The Witches' Kitchen supports my theory: it's part fantasy, part horror story. Of course, it's essentially a quest tale, and our Toad makes it through in one piece, if not precisely the piece she started the book with. (And I just noticed Amazon is calling this a book for teens!)
Like so many fantasy books today, The Witches' Kitchen ends with a hint of things to come. I have to admit, I'm curious to see what Williams will do with these characters next. Will he take them back to the Kitchen, or create a broader, even stranger world for them?

Note for Worried Parents: This is kind of a scary book, and the pictures may give a timid reader nightmares. That said, the Toad doesn't ever really get hurt, surviving the many threats against her. Her friends also escape relatively unscathed, though some minions and monsters are not so lucky. The Witches' Kitchen has definite boy appeal, with its hideous creatures and fight scenes. It's labeled YA, so it's basically intended for readers ages 12 and up, but I could see some 10- and 11-year-olds reading it happily.
Also: I requested this review copy from the Amazon Vine program.
Posted by Kate Coombs at 2:56 PM

Oooo, this one sounds cool, too! Looks like another trip to the library is in order!

Come on, Kim, can you ever have too many trips to the library? :)