A Review of Under the Green Hill by Laura L. Sullivan

Though this is low fantasy, it has a stately tone that echoes Tolkien's work, as well as a premise and a setting that felt enough like The Lion, The Witch, and the Wardrobe to me that I had to check to be sure the characters really had access to e-mail. (They do!) According to Kirkus, you should also be reminded of E. Nesbit's work. 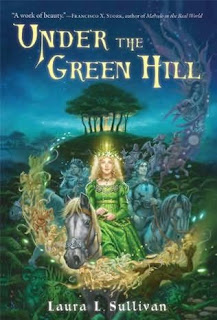 The story begins with a new fever that is hitting the children of the United States. To protect them from the illness, Professor Morgan and his wife send Rowan, Meg, Silly (Priscilla), and James to visit their great-great aunt Phyllida Ash and her husband Lysander. As human guardian of the most important fairy locale in England, Phyllida is understandably concerned: this is a seventh year, when the fairies select what they blithely call a champion and the humans fearfully call a teind. As Phyllida puts it, "Four children here, at Midsummer, on a seventh year? Even the villagers hide their children at the teind times." And that's even before she discovers that the professor's colleagues have shoehorned in two extra kids: horrible Finn and timid, allergy-prone Dickie. (Though Meg is secretly intrigued by Finn's good looks, even she has to admit that he's sneaky and arrogant.)

Phyllida duly gives the children a list of rules when they arrive at the Rookery. In addition, she tells them they are to stay in the house (or rather, the mansion) that night while she and the other adults attend a local festival. Naturally, her words are guaranteed to inspire someone like Finn to dare the others to sneak out and spy on the festival. It never occurs to Phyllida, who we learn is known as the Guardian or simply The Lady, that modern children might find her rules so ridiculous that ignoring them feels entirely sensible. After all, Phyllida informs the kids that the forest is off limits and they must not swim in the stream. They must never try to ride the wild ponies or eat food that anyone offers them. They must not give their name to anyone who asks, but should answer politely. And they must not kill the ants, who are "really fairies who have grown very old."

Um, right, the kids think, rolling their eyes, and that night they proceed to break three of the rules.

To the fairies, the Morgan children are a gift, since the family has a little fairy blood. Disguised as a boy, Puck-like Seelie Prince Gul Ghillie quickly herds the Morgan children to the Green Hill, where the lovely Fairy Queen asks Rowan to be her champion in the Midsummer War. Glamoured, he agrees, to the dismay of his sister Meg. (As the author points out more than once later in the book, the teind and even the "war" are no sacrifice for the fairies, but they mean death to one of the human champions.)

In the meantime, Finn and Dickie have become separated and have their own rather terrifying encounters with fairy folk. Finn concludes that the Morgan children are leaving him out deliberately. He recruits Dickie to research fairies in the estate's library, then uses the information to spy on the Fair Folk. In the process, Dickie ends up with a lot of knowledge and some secrets of his own.

As for the Morgan children, they set about training for war in the garden, coached by Gul Ghillie, who provides them with ancient, magical weapons. Meg continues to worry about Rowan, trying to think of a way to stop him from going into battle. But even she falls under the spell of Gul and the weapons, mastering the use of an enchanted longbow.

Sullivan explains things like fairy glamour and history thoroughly along the way, so that to a certain extent, this book acts as a primer about fairy folk and how dangerous they can be. (In this regard, it reminded me of Lesley M.M. Blume's recent treatise on urban fairies, Modern Fairies, Dwarves, Goblins, and Other Nasties: A Practicial Guide by Miss Edythe McFate.) You'll find a cavalcade of imps, nymphs, and legendary monsters in Under the Green Hill, together with handy information such as how to acquire the ability to see fairies and how to escape from malevolent oak trees.

Here's the Morgans' first glimpse of the Fairy Queen:

The woman, or the form of a woman, was mounted on a tall charger with a pale-gray dappled coat, a beast as much beyond the clumping plow horses of the May Day march as this woman was beyond the May Queen. Her mount was arrayed in jewels of white and green that seemed not merely to reflect light, but to give off light of their own. He pranced on legs that appeared too delicate for such a tall animal—he stood as high as a draft horse, with a broad chest and haunches that bunched with power held in check. He seemed aware of the value of his burden, and walked so lightly that his gilded hooves bent no grass, left no mark of his passing.

Though Sullivan strains credulity on occasion, e.g., not letting Phyllida and nosy Finn catch the Morgan children at their endless weapons training in the garden, or having the children master said weapons with astonishing ease, these are relatively minor considerations, and she provides some nice plot twists as the story progresses. Who is the other champion, and why? Will Finn get caught spying on the fairies? Will Meg find a way to save her brother's life?

A sequel is obviously in the making, as the Morgan children continue their association with the fairies, for better or for worse. Meg, in particular, seems to be a Chosen One. So look for a second book in a year or two.

I'll end by pointing out that the solemnity of Sullivan's style is both a blessing and a curse. It's a poetic approach that suitably reflects the grandeur of the fairy court and its human Guardian; however, it might strike some children as being too ponderous. If, on the other hand, you or your bright young reader is tired of all those warp-speed, television-style fantasies and want a deeper pool to swim in, Under the Green Hill is the book for you.

You may also like an older book with a similar mythology and setting, Pat O'Shea's The Hounds of the Morrigan.

Note for Worried Parents: There's peril here, a couple of violent acts, and a lot of scary fairies. In general, the tone is mature (in the grown-up sense). This book would probably be best for older or more sophisticated middle grade readers.
Posted by Kate Coombs at 10:20 AM

Jenny--Yes, I read one like that a few months ago and had to roll my eyes. Enough already! Of course, I'll pick a children's book over a book for grown-ups any day... :)

I just put this down today. I couldn't finish it. The author did a great job of explaining the fairy World. But the pacing didn't working for me.
Though I do plan on suggesting it to fans of the Penderwicks.

Doret--Yes, there's a whole lot of explaining going on, which slows the pacing. I figure a very bookish and myth-loving child might like it, though.

has anyone read a similar book, a character called joquil they use loop bags to fly. the green man is a hill that at the end of the book. the green mans flunkies are @men who look like they are made of leather! its set in winter! the children snnk out of their beds at night!