The fact is, sometimes a book appeals to us, not because it's just the right thing to read to Jack and Jill Averagechild, but because it isn't. Here are a few unique picture book selections: 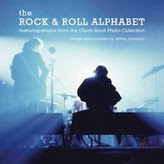 I couldn't resist getting a review copy of this one. I mean, how cool is that? Granted, I don't think this book is really about teaching 4- and 5-year-olds the alphabet, but I think it could be a hoot for teaching 8- and 9-year-olds a little about American music.

I recently studied music history with a high school senior, and since he's an aspiring rocker, we spent a lot of time on American popular music. It's a rich history, building on things like the blues of Langston Hughes's day and the Celtic music that made its way to the Appalachian mountains long before Elvis was born.

Which brings us to Chuck Boyd, a photographer who worked with the rock stars of the 60's and 70's. This book was created in his honor by Jeffrey Schwartz, a historian specializing in rock and roll in general and Chuck Boyd's photography in particular.

Each letter of the alphabet in the book represents a rock star or a band, while every two pages of text comprises a rhymed couplet. For example, the first two pages read, "A is for Aretha, oft referred to as the Queen" and "B is for The Beatles in their 'Yellow Submarine'."

Of course, "C is for Cream and the British blues invasion," while "D is for The Doors and their sonic exploration."

Other letters I particularly liked were "K is for KISS, a sight to see on stage" (so true!) and Schwartz's solution to the problem of the X page, "X is for T-Rex, Bang a Gong, Get it On'."

As I studied the history of rock music with my student this year, it occurred to me that the disconnect between the young and the old, and between classical music (considered respectable but stodgy by some) and popular music (considered ubiquitous and undeserving by others) is a fault in our handling of cultural history. American popular music is sometimes tainted by its association with drugs and sex and the ritual trashing of hotel rooms, but it deserves to be honored for what it is: an amazing new creation that took place over the course of a mere hundred years or so.

If you're not a music buff, you may not be very interested in Schwartz's new alphabet and what it represents. But for some of us, it's a starting point for teaching kids about a colorful, powerful part of our past.

After all, Lady Gaga wouldn't be here if it weren't for Madonna, and Madonna owes a musical debt to everything from Motown dance music to Led Zeppelin, while the Rolling Stones freely acknowledge blues artist like Muddy Waters as a major musical influence (not to mention the source of the band's name), and on it goes...

The Rock & Roll Alphabet reminds us that music has a history, and that artists in every medium build on one another's work. If you don't want it for your kids, hey; get it for yourself! It may not be as big as the usual photographic tomes, but it makes a great miniature coffee table book.

You can preview The Rock & Roll Alphabet on YouTube. 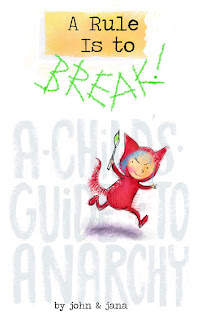 A Rule Is To Break: A Child's Guide to Anarchy by John Seven and Jana Christy

"Chaos and kids go together like lemon and fish." That's the opening line of the e-mail I got telling me about this book.

In a world where the term "anarchy" is often associated with lawlessness in the sense of "here come them bandits and we don't got no sheriff to save us," a picture book teaching children to be anarchic may sound a little unnerving. But wait—take a look at this book (which Jules of Seven Impossible Things Before Breakfast introduced along with more of the team's work in a recent post).

The main character is a little girl dressed in a red suit which at first glance looks like a devil costume; it actually turns out to be a wolf costume, in a nice homage to Where the Wild Things Are—a book which is pretty much about children and anarchy, too. (See also my post from a few years back, "Anarchy of the Imagination: Why I Love Children's Books.")

This little girl is a free spirit, and really, she simply acts out the exuberance we see all the time in small children. Like my new neighbor across the street, 4-year-old Louie, who jumps more often than he walks.

The first page of A Rule Is to Break says, "The opposite of rules is anarchy. There are plenty of ways to make anarchy." The illustration shows our wild child—who has blue hair, by the way—running past naked and grinning.

Next we get, "Don't look like everybody else. BE YOU!" And we see the girl sewing her red wolf costume, then wearing it.

And "Ignore school and read books. Use your brain!" This one shows the wild child up in a tree, happily reading a book.

But just when you might be thinking, "What will this book do to my sweet little child?" we turn the page and see, "Hug the ugliest monster you can find." With our red wolf-suited girl hugging a truly Sendak-worthy gray monster.

You may not appreciate the book's advice to "Paint pictures on your TV," but you might like "Forget about grocery stores and get dirty in your garden." I will restrain myself from giving you more, but suffice it to say, there's some great stuff in here.

Jana Christy's illustrations are clean and bright, with her personable red-clad child roaming freely across grocery sack-colored pages. The blue hair with the red wolf outfit is a great touch every single time it appears. Christy's artwork is cute without being cutesy. It succeeds without appearing to try too hard, an approach which perfectly matches its subject matter.

So—is this book only for the offspring of neo-hippies, rock musicians, and the more liberal sort of home-schoolers?

Not at all. If there was ever a book for starting a conversation about rules and the very idea of civilization and societies, for better or for worse, with 5- to 7-year-olds, it would be this one. Not to mention some of the advice is a lot of fun.

I was reminded of a rather amusing picture book called 17 Things I'm Not Allowed to Do Anymore by Jenny Offill and Nancy Carpenter, although John and Jana's book is far more free-wheeling and, I would say, appealing. (Offill's main character, also a girl, is restricted over and over, but her imagination just won't stop.)

Which is really the point, I suspect.

Find out more about A Rule Is to Break and other works by this author-illustrator team (e.g., Happy Punks) at AuntieUncleBooks, home of the Wee Anarchists Un-Club. 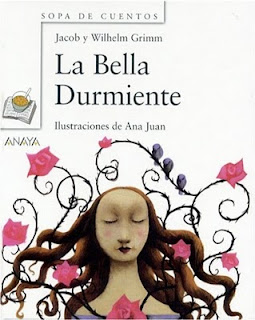 It's a little self-serving of me to throw this one in, considering it's in Spanish. A few days ago I had dinner with a friend I hadn't seen in 26 years, an Argentine woman, which took me back to my time spent in Argentina, of course. It was great hearing that unique Argentine Spanish spoken once again...

But I mostly got this book, which I ordered from Europe, because of the illustrations, not the text. I am a huuuuge fan of Ana Juan's artwork! In particular, I love her illustrations for Frida, Jonah Winter's biography of Frida Kahlo. See also her illustrations for Elena's Serenade by Campbell Geeslin and for The Jewel Box Ballerinas by Monique de Varennes. And her newest work, the illustrations for Catherynne M. Valente's much-talked-about middle grade fantasy novel, The Girl Who Circumnavigated Fairyland in a Ship of Her Own Making. (See my recent review here.)

In English this reads: "In times past there lived a king and queen, who said to each other every day of their lives, 'Would that we had a child!' and yet they had none. But it happened once that when the queen was bathing, there came a frog out of the water..."

So Juan's first illustration is a frog, looking out of the page.

The next illustration gives us a pleased-looking queen all dressed in black, holding her baby daughter, who is swaddled in cream. The king peers over the queen's shoulder like an Eastern potentate, while the queen wears one of those hats with a veil around the sides, her crown perched on top. 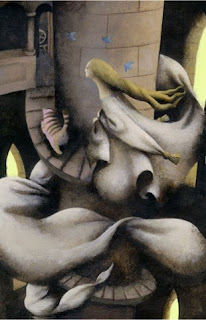 Juan's fairies are unique, sort of pink floaty shapes with barely discernible faces. I'm not sure how well they work, but it is nice to see a different approach. The evil fairy bursts onto the next page looking for all the world like a red Georgia O'Keefe flower, looming over the child, while the king and queen are shown off to one side, diminished.

A briar motif done in gray winds down the center of each spread, dividing the illustration from the text. It is also used to good effect on the endpapers.

I like the later images in the book best, when the princess goes up the stairs and then falls asleep. For instance, as the princess ascends a stone spiral stairway, her long robe billows out behind her, trailing around the spiral in a ghostly way. Very nice!

I also like how, when the prince shows up, Juan depicts him standing beside the bed, with the princess politely covering a yawn as she drags open her sleepy eyes. No kiss here, but a clever glimpse of how a real person wakes up!

In general I am not as fond of the artwork in La Bella Durmiente as I have been of Juan's illustrations in other books, but if you are, like me, a major fan, it might be worth your while to track down a copy.

Note: You can see more of Ana Juan's artwork at her website.
Posted by KateCoombs at 6:02 AM

Also, anyone who thinks children could be TAUGHT anarchy obviously hasn't spent much time with them!

Hi, Kate--I'm embarrassed to say I've never visited your blog--and it's wonderful. Thanks for the wide variety of books you review--wowee kazowee!

I wasn't sure how to post for tommorrow's Poetry Friday...since I'm on the west coast I'm asleep when everyone else is posting.

Just letting you know that there will be a post up at www.TeachingAuthors.com on Friday with a terrific icebreaking exercise for teachers. All you need is a key collection...or for each student to bring in a key or two. I've included an original mask poem about a key, too.

Thanks so much for hosting P.F. this week...I know it's a lot of work and we ALL appreciate it!

Thank you, April! I'm not usually a big one for icebreakers, but if it includes keys AND poetry, I'm in!