When Jack comes to a small country town, everything changes. All he knows is that he's going to spend the summer with Uncle Clive and Aunt Mabel, but his coming impacts the people in the little town even before he reaches the unusual purple house where his aunt and uncle live. Little Frankie, the boy with the scarred face and the missing voice, hears a sound of bells, and his sister Mabel smells something sweet and strange. Anders feels a humming and prickling in the summer grass beneath his feet. Even Clayton Avery, the town bully, gets an odd ringing in his ears. Here's how Anders responds to the sensation:

"So," he said out loud. The bees hummed, the ground hummed, even his bones and skin hummed and hummed. "So it's coming back. Now. Right?" He waited, as though someone might bother to answer: the growing corn, the tangled wood, the clear wide sky. Nothing did. Anyway, he was pretty sure the answer was yes.

As for Jack himself, it h 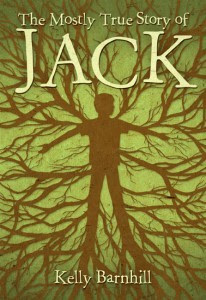 asn't really occurred to him just how strange his own life is: the kids at school, bus drivers, even his own parents tend to forget about him. But the experience intensifies when his mother drops him off. Afterwards, he tries to call her or his father, but he can never get through. He writes a letter, but the words disappear from the paper before he can get to the mailbox as his uncle's two big cats watch him far too knowingly.

On the other hand, Jack makes friends for the first time, with Anders, Mabel, and (sort of) Frankie. But town bully Clayton Avery tries to beat him up, and Clayton's wealthy father apparently wants to kill Jack. Why?

Kelly Barnhill's new book is a fantasy, but it is also a mystery, its suspense building as we try to understand who Jack is and why he matters to so many different people. The other mystery is what happened to Frankie, who disappeared for a time and then was rescued by Jack's uncle. During the period when he was missing, people tended to forget he had ever existed. Other people have also disappeared and were forgotten, mostly children who vanished from the old schoolhouse.

Meanwhile, Mr. Avery assigns his smirking assistant Mr. Perkins to spy on Jack, and the man manages to get his hands on Jack's backpack, which contains something Uncle Clive has been trying to keep away from Avery.

And Jack is feeling awfully weird. For one thing, these vines keep crawling in his window. And the house itself seems to be paying attention to him.

All of it comes to a head when Mabel disappears and Jack knows he must find her. The truth about how Mr. Avery got his wealth and what happened to those children is about to come out—and it will give Jack the answers he's been looking for, too.

I suppose my only quibble with this book is that there's a certain amount of explaining required to clarify the situation at the root of everyone's troubles, and I'm not sure I was completely sold on the underlying concept. But that's what suspension of disbelief is for, after all. I do think the tale succeeds handily just the same, especially in light of the strong characterization.

Branhill's clear style, her well-drawn characters, and a sense of emotional nuance add to the success of her storytelling. Here's one more excerpt:

His glasses itched terribly under his nose, but when he tried to adjust them, he realized that he couldn't move his right arm. Or his left. Tendrils of grass and ivy slithered along his side. They twined around his ankles and wrists and held him tight.

"What's going on?" Jack squeaked, but a wave of moss covered his chest and a tangle of roots pulled him into darkness. "Help me!" he yelled, "Somebody help me!" And in that last second—when the sky above him was reduced to a spot the size of the head of a pin—only one thought remained:

For kids who like mysteries as well as fantasy, The Mostly True Story of Jack will be a captivating summer read.

Note: I received a review copy of the book from the publisher. The Mostly True Story of Jack will be available in bookstores on August 2.
Posted by KateCoombs at 5:50 PM

I have been very interested in this one since I heard about it. Nice to know it has so much mystery too. I like that element in my books.

Brandy--Even the title made me want it! The book wasn't what I expected, but it has a real intensity, a sort of yearning tone that's nice and a little different.

I recently ordered this one to check it out.Thanks for the insightful review!

You're welcome, Deb. I'm curious to know what you think!