A Review of Black Heart by Holly Black

Have you read Black's books, White Cat and Red Glove? No? Then stop reading this review and go do that. 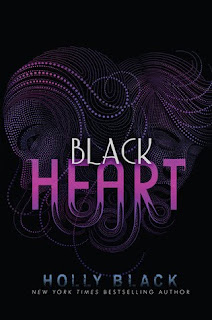 se, you had to read the other two books first, not just to avoid the perils of spoilers, but because this trilogy builds beautifully, and diving into the last book unprepared simply does not do Cassel Sharpe's overall story arc justice.

Okay. In Holly Black's alternate reality, certain people are curse workers—and naturally, they take on the role of crime families. Different curse workers have different gifts, such as changing people's memories, making people do what they want, and flat-out killing people. Everyone wears gloves, both as a fashion statement and because curses require skin-to-skin contact. Probably the best detail of all is that curse working affects the workers physically. For example, killing someone with a curse might mean losing a finger, as in the case of Cassel's death worker grandfather.

At first, Cassel doesn't even think he's a curse worker, though other people in his family are. That's before he finds out he has turned the love of his life, Lila, into a cat. Or that his ruthless older brothers have been using his special gifts and wiping his memory. Turns out Cassel is that rare thing, a transformation worker. He can turn something or someone into something else—completely and permanently, if he wants. Cassel frees Lila and she falls in love with him, but he discovers that her love has been manufactured by his mother. Then Cassel's older brother is killed, and he has to decide whether to work with the mob or the FBI.

As Book 3 begins, Lila is still avoiding Cassel because she learned the truth about her supposed feelings for him. Cassel and his brother Barron are now working for the FBI—sort of. Cassel doesn't really trust anyone. And now Governor Patton, who was magically conned by Cassel's mother, is trying to lock up all the curse workers. On the school side of things, Cassel's best friend Sam is having trouble with his girlfriend Daneca, who suspects the truth about Cassel. A girl named Mina asks Cassel for help, but Cassel smells a rat. Then there's Cassel's devious mother, who is being held hostage by Lila's mob boss father until Cassel can find a missing piece of valuable jewelry. The Feds want Cassel's help, too, but is that all they want? And can Lila forgive him before he gets himself killed? 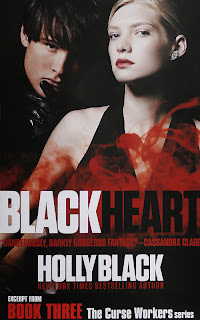 Black Heart is a darkly rollicking page-turner for readers of urban fantasy and paranormal romance. The author has a way with words, and the touches of humor serve to counterbalance the essential darkness of the plot. Here's a look at Cassel in his boarding school dorm room with Sam. Cassel has just come back from a fight with a guy who dropped his gun:

I shoulder my way into the closet and step up onto a sagging box. Then, reaching under my jacket, I pull out the gun, and tape it with a roll of duct tape high on the back wall, above my clothes. I arrange a jumble of old books on the shelf just below it to block it from view.

"You've got to be kidding me," Sam says.

He clearly watched the whole thing. I didn't even hear him get up. I must be losing my touch.

"How about getting rid of it?" he says, his voice dropping to a harsh whisper. "That's a gun. A gun, Cassel. A guuuuuuuun."

"Yeah." I climb down, hopping off the box and landing with a thud. "I know. I will. I just didn't have time. Tomorrow, I promise."

"How much time does it take to throw a gun in a dumpster?"

"I really wish you would stop saying the word 'gun,'" I say, flopping down onto my own bed and reaching for my laptop.

I like the way Cassel is very much a teenage boy, smart and clueless at the same time. He gets in trouble, bumbles a bit, somehow survives, and manages to figure out what he really wants in life. Holly Black has a great ear for humans, especially those of the teenage variety. Cassel is an imperfect hero, but that makes reading his story all the more enjoyable.

Note for Worried Parents: This trilogy is for teens and includes violence, sex, and criminal behavior. All three topics are presented appropriately enough in context, but the books are probably best suited for high school students. Then again, if you've been letting your 10-year-old read The Hunger Games, go right ahead.
Posted by KateCoombs at 3:33 PM

I'm so excited for this book, just wish my library would get it a bit faster :) Thanks for the review.

Oh, oh, oh, is it out already? So excited! Think I might get this one electronically: instant gratification!

Melissa and Kim--I know, right? I'm not big on delayed book gratification, unfortunately for my budget. :)

I got it! I didn't even bother to go get my iPod, I just sat at my computer and read the whole thing (not quite all in one sitting, but almost!). It's why my taxes aren't done yet.

I loved it. Great conclusion to the trilogy, but leaves room for more if she decides to continue . . .

Kim--Oh, yay! I'm so glad! Isn't it bone-deep satisfying to get your hands (or eyes) on a great new book? Good point about the conclusion. You know, in a way, Cassel's goal for all three books is the same--to be with the girl he loves. Overlooking all the very cool bells and whistles, that's the complete story arc.