A Review of Dragonswood by Janet Lee Carey

Wilde Island, A.D. 1192, where the dragons and the fay live in a sanctuary called Dragonswood. In a nearby village, Tess hides her own magical abilities or the fact that she sometimes slips away into the forbidden forest and has seen fairies and dragons. She has enough trouble dealing with her father the blacksmith, who beats her. 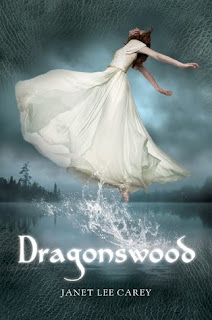 al witch hunter comes to her village, Tess is quickly targeted. Under torture, she betrays the two friends who have visited the woods with her. The three girls barely manage to escape with their lives and hide in the forest. There they meet one of the royal huntsman, Garth. He gives them shelter, but Tess is afraid to trust him.

After taking new risks to make up for her earlier betrayal, Tess sees her friends settled. She also finds out some of Garth's secrets. Eventually Tess visits the fairy realm, where she discovers the truth about her own heritage. But the fairies, like her human father, seem likely to use her for their own purposes. And Tess has decided she has a purpose of her own. To get what she wants, she will have to make strange new allies and trick the tricksters who surround her.

Janet Lee Carey does some nice world building with her versions of dragons and the fairy kingdom, and juxtaposing them with witch hunters and political intrigue adds still more spice to the mix. She touches on themes of loyalty, betrayal, and forgiveness. What motivates people like the witch hunters, or like Tess herself? I found Carey's stubborn heroine especially appealing.

The trees of Dragonswood rustled in the wind along the boundary wall. Mist blew up from the sea and swirled at our feet like witch's hair. I looked to the pines, longing to scale one.

"You're to marry Master Percival soon," Meg reminded me.

"You're seventeen. If not Master Percival, it will be someone else."

I'd had other suitors; none were rich enough to please my father until this latest one. He wanted to rope me to an older man with money, one who kept his wife in the same fashion he'd kept his own. Master Percival had grown children. He'd outlived three wives already. I'd seen their bruised faces when I'd met them at the town well. The welts on their arms just like mine and Mother's.

"Wedlock is a hangman's noose," I said.

Dragonswood is a suspenseful adventure with a romance between Garth and a leery Tess that develops slowly and subtly. I very much appreciate the way the author actually ends the book, even while hinting at later books that will feature other characters.

Note for Worried Parents: This book for teens presents violence in the form of child and spousal abuse (see above), as well as torture and the threat of death from witch hunters. It also describes the fairies' random sexual promiscuity as part of their culture.
Posted by KateCoombs at 3:21 PM