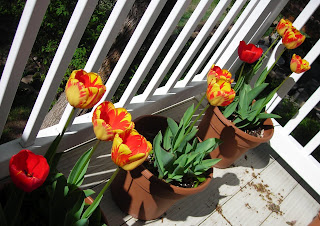 It's spring, so that means pale green leaves, tulips, and a fresh bunch of books for middle grade readers.

Why did I want to read this book? I've read Hoot, Flush, and Scat, as well as Hiaasen's mysteries for grown-ups. Hiaasen is a funny, off-the-wall author with a unique Florida setting and environmental focus.

Wahoo Cray's dad Mickey is an animal wrangler with a menagerie of critters in the backyard. Wahoo himself is missing a finger thanks to the family's gator, Alice. (It was his fault, as he is quick to tell anyone who asks.) The first sentence reads, "Mickey Cray had been out of work ever since a dead iguana fell from a palm tree and hit him on the head." Mickey has 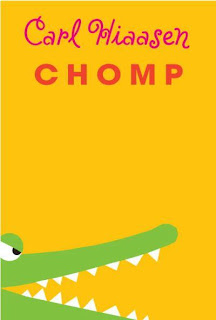 headaches after the concussion and stops working. Finally his wife goes off to China to teach English in order to pay the bills. So when Wahoo gets a call about a high-paying job for his dad working on a wildlife adventure reality show, he takes it. Only thing is, the show is pretty much a fake, especially its star, Derek Badger, who doesn't know how to treat animals and will eat any small animal (live) as long as he's on camera—but wants lobster and creamy desserts the rest of the time. Naturally, Mickey clashes with Badger, and Wahoo has other troubles when he invites a girl from school who is trying to escape her abusive stepfather to hide out by coming along for the ride into the swamp.

Excellent craft, crazy characters, plenty of action and suspense, comedy, and a great send-up of wilderness reality shows make this another winner from Hiaasen. Our boy Wahoo manages to be a nicely dimensional main character in the midst of the various chase scenes and animal attacks. As for Alice the gator, she practically joins the cast of human characters even as she retains her reptilian nature.

I like the author's #1 Ladies Detective Agency series, and this is a book about "Precious Ramotswe's Very First Case." Better still, it's an early chapter book, which is a nice change for an adult crossover. 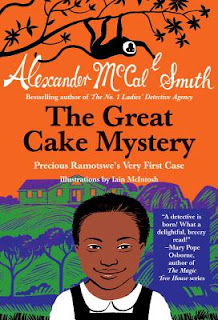 The plot is simple: when a school friend is accused of stealing treats from students' lunches, Precious sets out to find the real culprit. The solution is very easy to see from an adult perspective, but young readers may not catch on right away. What I found most interesting was that the child Precious uses her knowledge of human nature as well as sensible tactics to solve the mystery—just as her grown-up self will someday do.

Considering most books for children published in the New York-dominated market are set in the United States, it's refreshing to see an African setting for this age level. The book joins Atinuke's Anna Hibiscus books as a reader-friendly story that will show children in America a little more about life in Africa, in this case Botswana. The book is made all the more effective by its truly lovely illustrations, done by Iain McIntosh in what appears to be woodcut. (The Great Cake Mystery was originally published in Scotland a year ago.)

The book begins: "Haven't you ever said to yourself, 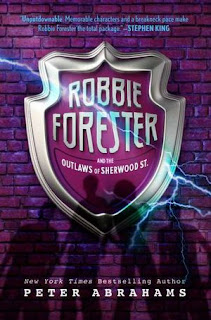 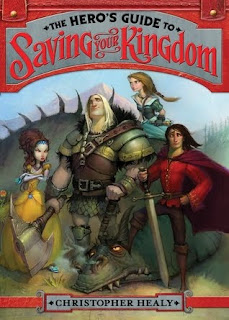 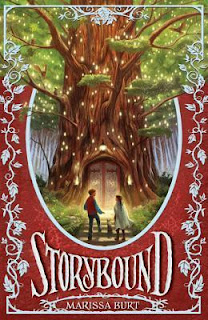 Una often told herself that she was invisible. Perhaps that was the reason people passed her in the halls, their eyes skimming over her slight form as if she were part of the scenery: a desk, a book, a classroom, a girl.

Posted by KateCoombs at 1:32 PM

Storybound was hard for me to get into as well.