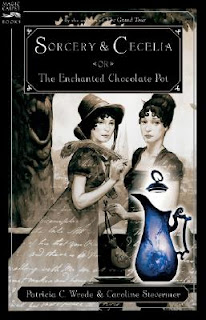 Before there was Kat, Incorrigible by Stephanie Burgis, before there was even Downton Abbey, there was Sorcery and Cecilia, or The Enchanted Chocolate Pot, an epistolary fantasy novel which reads like a Regency adventure with a dollop of romance but includes magic as a rather ordinary aspect of British society in 1817.

What's really great about this book (besides the story itself) is that it began as the Letter Game, in which two writers build a story by writing back and forth as characters, not planning ahead in the slightest. When fantasy authors Patricia C. Wrede and Caroline Stevermer played the game, they went all out: the letters turned into a novel! (Book cover above left is from the 2004 print edition. Book cover below right is from the new ebook edition.) 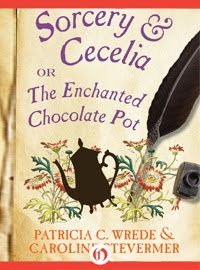 We begin with Cecilia, who has been left in the country (Essex, to be precise) while her cousin Kate goes to London. Normally one would expect the two to go to London together, but there was this incident with a goat... At any rate, the aunts have decided to split them up. Doing so does not, however, keep the girls out of trouble.

Here's an image of the very first letter from Patricia C. Wrede writing as Cecilia. Or you can use this link to take a closer look. 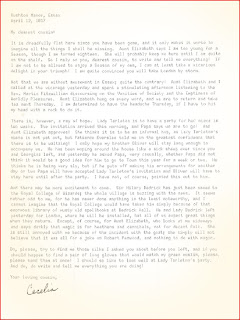 Things aren't quiet for either girl. Kate is at an event and stumbles into a pocket garden where a terrifying woman tries to make her drink poisoned hot chocolate, apparently thinking Kate is Thomas, Marquis of Schofield. Cecilia (AKA Cecy) meets Dorothea, who is far too attractive to every young man in sight, as if she were using some kind of magic. Yet Dorothea is a very nice person. And why is there a charm bag under Cecilia's brother Oliver's mattress? Then Cecilia discovers a young man named James Tarleton skulking about, spying on Dorothea.

The ominous doings prove to be not only complex, but intertwined. Kate steals a book from a magic maker and creates her own charms, while Kate dances with the marquis at a ball and learns far less than she would like. Then she is attacked by magic, and her cousin Oliver disappears. 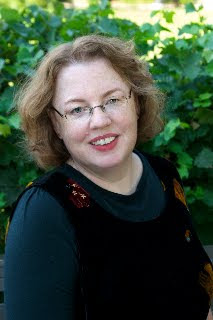 One thing I really like about this book is that while Thomas and James start off having all the fun (okay, danger) and trying to keep the young ladies out of it for reasons of safety, they fail. Kate and Cecilia are clever, active, and practical. Readers will observe that Thomas and James can only get so far with gallantry and great waistcoats; they really do need Kate and Cecilia's help. Not to mention that two romances are brewing. Make that four romances, actually. Brewing, as I said...

Which brings me back to that enchanted chocolate pot, the center of the troubles Thomas is having with a pair of nefarious wizards. Naturally, Cecilia has a plan. Although this foursome will need more than one plan to solve the various problems created by their enemies.

As Leah Hanson once put it, "[t]his mystery is a perfect combination of Harry Potter's magic and Jane Austen's love stories."

I was happy to r 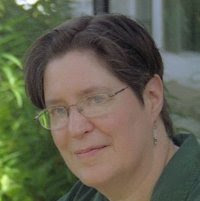 eread Sorcery and Cecilia as a participant in a 2-part blog tour to honor the reissue of the trilogy in ebook form (yes, there are two sequels). The book is just as much fun as I remembered. Look for Post #2 next Monday, when you can see how the first letter evolved. In the meantime, drink some non-poisoned hot chocolate and track down this book!

Here's a link to Stephanie Burgis's post about the books.

Note: That would be Patricia C. Wrede to the left and Caroline Stevermer above right. Other good books by Wrede include Dealing with Dragons and the rest of the Enchanted Forest Chronicles, along with Mairelon the Magician and Magician's Ward (recently reissued in one volume as A Matter of Magic) and the new Frontier Magic books. Other books by Stevermer that I like are A College of Magics, A Scholar of Magics, and River Rats.

Update (5-13): The link to the letter isn't working at the moment. I'll let you know if I can get a working link again!

Posted by KateCoombs at 5:08 PM

I LOVE these books soooo much as well as the Mairelon titles. I made up my own genre name for them - polite society fantasy - and have collected everything similar (Marissa Doyle for example) but nothing has ever quite come up to my expectations of the delightful mix of humor, magic, society, and romance. I wish they would write more...

I agree 100% with everything Jennifer just said - these books are fantastic, and there is hardly anything else out there that even comes close to them. I lent out my copy of The Enchanted Chocolate Pot over a year ago (friend who loves Jane Austen but wasn't sure about fantasy, I figured this would be the perfect book to kindle her interest) and still haven't gotten it back; I'm seriously contemplating ordering myself a new copy just in case she never gets around to returning it! My shelves look so bare with only the second two books of the trilogy ...

Jennifer--Oh, they should write books about the children of these four!

Louise--I've done that. Bought a beloved book to replace one I've loaned because who knows if I'll ever see the loaner again!

I totally adored these books. I'm happy to see they are still around - ebook or not.

They're coming out in ebook form?!
*shrieks with delight and does a happy dance*
I've been waiting so long for these to be avalible on kindle, even though I own paper copies.
Thank you so much for this information!

Bookkm, Trudy, and Lindsay--I know, I just like talking about them! Only I read the first one yesterday, and now I need to reread the others, too.

I finally read these recently; they're so much fun. The letter format takes some getting used to, but it definitely adds to the reading experience to know that it was two authors writing each other: you can see the way they hand each other plot ideas and then have to figure out what to do with them!

I am so grateful to Anita Silvery for introducing me to this series in her Children's Book-A-Day Almanac. I too wish they would write additional books focusing on the children.

Kim--True! I liked seeing how Kate and Cecilia were written by two different people, and how that affected both their letter voices and their choices. I will add that at first, during this reread, I thought that Thomas and James were the ones actually driving the plot and K and C were just hanging on around the edges, but then I realized that it only starts out that way. K and C steadily, politely, and cheerfully steal the plot away from T and J as the book goes along.

All About Children's Books said...

Hello. I really enjoy your blog and I have nominated you for the Versatile Blogger Award. If you choose to accept the award and post the badge, just follow the format I did in today's post.
http"//www.dianemaerobinson.com
All About Children's Books
Thank you.
Diane Robinson

Diana--I am sort of frazzled this month, so I don't think I'll follow up on this with a post, but I thank you so very much for nominating me! :)