A Review of Deadly Pink by Vivian Vande Velde

In this slightly futuristic sci-fi/fantasy mix, Grace has a real superstar of an older sister. Emily is a genius, also pretty and popular. So Grace is startled to learn that Emily, who works for the Rasmussem video game company, has apparently disappeared into one of the artificial reality games and won't come out. Or can't come out—really, it's not clear exactly what went wrong. But Grace is drafted to go into the game and bring her sister back. 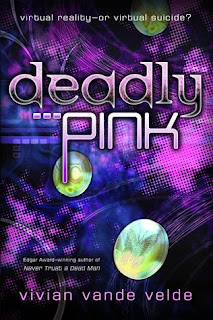 To her surprise, the game is not very cooperative. Neither, when she does find her, is her sister. Grace must deal with increasingly difficult scenarios and hostile characters, of which Emily is one of the most hostile. Grace begins to suspect that the game is not the problem: Emily is. But why?

On the one hand, we have Grace trying to figure out how to play a virtual reality video game in which the rules have been changed. On the other hand—well, actually, the same thing applies to her sister. Emily is not acting like herself.

The game itself starts out as a sweetsy pink world of charming Venetian-style gondoliers and pastel fairies, but it turns into a place that would just as soon burn players to a crisp using dragons. Eventually Grace and Emily must team up to escape being killed in a game that winds up being a fantasy world with its own denizens and desires. A place where they might just stay dead.

Deadly Pink has a definite theme: Don't cheat. Grace finds out that she must make up for the ways she has tried to cheat at the video game she's been trapped in, and Emily has her own troubles to deal with. I'm not crazy about "the moral of the story is" when I'd rather just read for character and plot, but the story itself has a good premise, and I liked watching how Grace deals with her sister, let alone angry sprites.

"Two more," she said. Either she'd helped design the maze or she'd navigated it quite a few times, for she seemed entirely familiar with its twistings and turnings. We came to another pot, this one holding hollyhocks. I thought I was doing a good job with hiding how impatient I was getting, but maybe not, because she said, "You can save us some time." She pointed the way we'd been walking. "Around that corner"—it was a right-hand turn—" then take the second left, and there's a vase holding a gerbera daisy. If you can get that for me while I pick these, then we can go back and drink some lemonade on the porch and discuss things.

It only worked as far as "take the second left." There was no vase.

And when I retraced my steps to the pot of hollyhocks—which were all still there, by the way—there was no Emily, either.

The author has written two earlier books about the Rasmussem Corporation: Heir Apparent and User Unfriendly. I'm actually more fond of some of her fantasy, such as Dragon's Bait and Witch Dreams, but Deadly Pink is a fun and clever summer read. (10 and up; due out on July 10th)

Note: I requested a copy of this book from the Amazon Vine program.
Posted by KateCoombs at 2:41 PM