A Review of Giants Beware! by Jorge Aguirre and Rafael Rosado 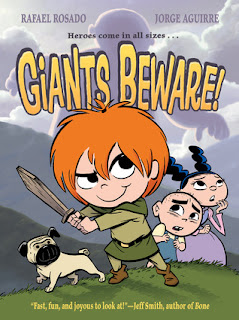 al kid Claudette is just a tad bloodthirsty, so it's no surprise she ends up going on a quest to kill a giant in this graphic novel. Of course, she gets the idea when an old man tells the village children the terrible story of "The Baby-Feet-Eating Giant." Claudette is incensed by the story's ending—or lack thereof:

Pascal: Pierre XXXII and his men valiantly chased the giant...
all the way up the tallest mountain in the territory. And he never bothered our village ever again.

Claudette: AND THEN WHAT?
Well?
So, how did the marquis kill the giant?

Claudette: Burnt him at the stake?

Claudette: Stabbed through the heart?

Claudette: Oh, wait, I got it...
THEY TOLD THE EVIL GIANT A POINTLESS STORY, AND HE DIED OF BOREDOM!

Claudette: Is that it?!
Aw, get to the bloody part, already!

Naturally, Claudette concludes that since the "irresponsible" long-ago marquis never killed the giant, the evil creature is still up on the mountain, needing to be killed. By her. Of course, she takes two buddies along: her fearful little brother, who wants to be a chef and a master sword maker, and her friend Marie, the current marquis' daughter who wants to be a princess. (We also learn that Claudette's blacksmith father is missing both legs and one arm because he used to be a monster slayer and eventually lost.)

Often, in such stories, the hero or heroine is a valiant teen, but a lot of the humor here stems from Claudette being seven or eight years old, nine or ten at the most. I'm going with seven or eight because of her simplistic, determined world view. This means Claudette doesn't reason very far ahead. It also might explain why Gaston brings pots and pans on the trek, but no actual food. And why, as they tromp through the village to set out on their quest, all of the adults who hear where they're going think it's just a cute game the kids are playing. These three really are babes in the woods. Make that the Forest of Death, which is one of their first stops.

In true quest fashion, the three heroes have three encounters with monsters or other threats along the way. Then their fellowship is splintered by Claudette's hubris (and some lies she told, inspired by the current marquis' philosophy) before they truly join forces and achieve their goal. Or rather, arrive at their goal and reassess the situation. Meanwhile, Claudette's blacksmith father and his mysterious companion are hot on their heels, as is a less capable group of villagers who are being paid for their efforts.

Illustrator Rafael Rosado gives us a relatively bright palette dominated by Claudette's carrot-top. He outlines characters and key setting components with strong, contoured ink lines. I got a kick out of noticing that Claudette's outfit resembles Robin Hood's at first glance, but also evokes the Girl Scouts. Rosado is a dab hand with action scenes, especially in the forest and at a river that must be crossed.

The real strength of the storytelling lies more in the characters than in the plot. Claudette is ox-like in her determination, as much foolhardy as courageous. Her pride and eagerness as she wields her wooden sword are so very young that they are cute rather than irritating. Gaston starts out seeming like a stereotype—the sweet boy whose ultra-tough father doesn't understand his interest in creating fine cuisine. But Gaston really does long to make swords as well as pastries, and his knowledge of food has surprising benefits. As for Marie, at first she is just every other girl who wants to be a princess. But humor adds to the effect. Her efforts to test the pea-under-the-mattress premise are very funny, for example. And ultimately, we discover that Marie is a lot smarter than previously suspected. Each of the quest companions winds up solving one of the problems they encounter in a great display of teamwork.

I was a little less sold on the secrets of the giant, but still had a lot of fun following the twists and turns of the plot.

There is a certain nuance to another aspect of the story, which is that the villagers have been cowering inside the high walls the long-ago marquis built for at least a couple of hundred years. Led by the three children to venture out of their fortified village, the villagers learn that they can overcome their fears. The world broadens, and not just for Claudette and her friends.

A combination of adventure, humor, and heart, Giants Beware! is the perfect graphic novel for readers ages 6 through 10. And really, we have television to thank for this and many of the other graphic novels hitting the children's book market: the writer and illustrator come from the animation and children's TV industry.
Posted by KateCoombs at 9:17 AM

I think I already added this to my wish list, but if not I will. I love MG graphic novels. You've recommended some good ones!