A Review of Hapenny Magick by Jennifer Carson

Awhile back I taught children's book writing classes for Online University for two summers in a row. The first year, I tried covering everything from picture book to YA, but the second year I narrowed it down to middle grade fiction. Jennifer Carson was one of my students that year, so I was pleased to hear from her when she wrote asking me to review her second book, Hapenny Magick. (Her first book was To Find a Wonder.) 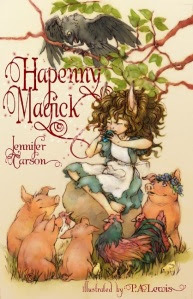 Jennifer is creative in more than one way. She also happens to be a dragon charmer. Here's her bio from Amazon:

Jennifer Carson lives in New Hampshire with her husband, four sons and three four legged friends. She grew up on a steady diet of Muppet movies and renaissance faires and would occasionally be caught reading under the blankets with a flashlight. Besides telling tales, and being an editor for Faerie Magazine, Jennifer likes to create fantasy creatures and characters and publishes her own sewing patterns. Her artwork and patterns can be seen online at thedragoncharmer.com. Hapenny Magick is her second published work of fiction.

Jennifer's work has been featured in national magazines like Faerie Magazine, Soft Dolls and Animals, Teddy Bear and Friends and Dolls United. In the spring of 2008, Jennifer was featured on the ABC affiliate, WMUR tv show, New Hampshire Chronicle. Her sewing patterns have recently been translated in Dutch and in April 2009, she received the NE-SCBWI Ruth Landers Glass Scholarship for her writing. 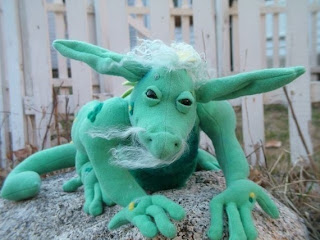 Jennifer's fabric fantasy creatures are stories in and of themselves, so it's easy to see the roots of a book like Hapenny Magick. I'll confess that I'm not usually into cute, but wow—Jennifer's creations are cute! Her book is also cute, despite the troll peril. I think 2nd through 4th grade would be about the right reading age for this story about a Hapenny girl named Maewyn who lives with a mean slob named Gelbane after her mother goes away on a journey. Soon Maewyn meets up with a talking pig and a wizard and discovers she has magical powers of her own. And she begins to wonder—is her village really safe from the Hapenny-eating trolls, after all? The magic on the bridge pillars may not be working quite the way it should... 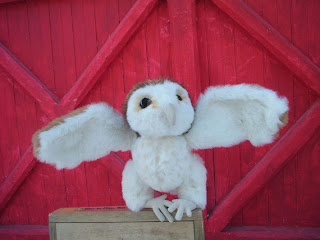 Maewyn's magic and her determination to help Hapenny friends like Leif, who has gone missing, assist her with her mission, as do new friends like a giant named River Weed Starr. The tale ends with an epic battle and a new future for Maewyn. Here's a sample from the book that shows Mae playing her flute as she rounds up some runaway pigs:

Skipping to the tune she played, Mae made her way to the edge of the hayfield. One by one the piglets came, trotting in a line like a gaggle of newly hatched goslings. A sow at the rear kept the piglets in rank. The boar took the lead. Mae's skirt swayed against her knees as she led the swine parade. They trotted around the hill the barn was built into, through the damp and dewy grass, and to the pigpen. Kicking the gate open, Mae danced into the sty. 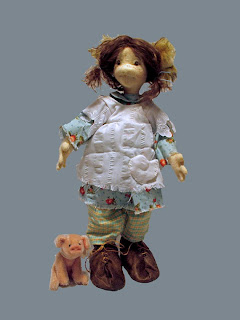 All the pigs were safe once more—except the one still nipping the heads off the flowers. Her head nodded to the beat; she even let out a happy oink, but she didn't join the march through the farmyard. That pig was always hard to catch. Sometimes she would even go missing for weeks and then show up one morning like she'd never been gone.

Jennifer Carson's book is full of whimsy and a gentle humor, but it also includes peril and a satisfying adventure. Hapenny Magick is a fitting tribute to the world Carson first created in cloth. (See fabric Maewyn, right.)
Posted by KateCoombs at 10:37 AM

It's a fun book--I just wish I had the sewing skills to make Jennifer's patterns!

My word! The book sounds wonderful. Talk about multitalented!

Lin--Yes. The book is nicely whimsical and the fabric art is so impressive.