A Review of Horten's Miraculous Mechanisms by Lissa Evans

Quest books based on puzzles and clues really only work if you get caught up in the main character's desire to find the answers. Fortunately, that's what happens in Horten's Miraculous Mechanisms: Magic, Myster & a Very Strange Adventure. In this book originally published in Great Britain, Stuart's parents move him to Beeton, the town his father's family is from. Stuart's initial dismay and boredom are not relieved by the girls next door, triplets who spy on him and publish his activities in a neighborhood newspaper. They are, however, relieved by the discovery of a mystery involving Stuart's great-uncle Tony. 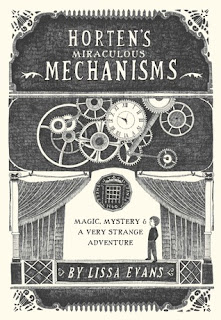 Tony was a magician and, being short (like Stuart), his stage name was Teeny-Tiny Tony Horten. The magician disappeared unexpectedly after being accused of being responsible for his fiance's death in a fire. He left his nephew, Tony's father, a message hidden in a puzzle box along with eight threepenny bits.

P.S. Start in the telephone booth on Main Street.

As it turns out, Stuart's father didn't even find the message because he was not the right sort of boy to have it. But Stuart is. He finds the message and begins following a treasure trail of old mechanisms, inserting a threepenny bit in each one when he can and getting further clues. Then April, one of the girls next door, starts following him, as does a greedy woman connected with his uncle's magician past. Stuart also meets a kindly elderly woman with another sort of connection to Teeny-Tiny Tony.

The other piece of Stuart's heritage is that there used to be a factory where the Hortens made mechanisms. Some of the machines are kept in the Beeton city museum, but Stuart runs into trouble when he tries to get at them. Oh, and Uncle Tony's house, which contains clues and possibly the missing workshop, is about to be demolished. It all comes to a head during Beeton's summer festival. Meet Stuart and April in the park by the bandstand and see what happens...

Stuart is your basic nice Everykid, while the secondary characters are a good bunch. About the only flat character is the villainess, and since you'll find yourself wanting to flatten her with a cartoon steamroller, that's not too terrible, after all.

At first this book seems to be about mechanisms, not magic, but as Stuart learns, there is magic associated with the mechanisms, the threepenny bits, and the long-ago disappearance of the magician. (The combination of magic and mechanicals is what I wish we'd seen a bit more of in Hugo Cabret, actually.) This is a small book, even in trim size, but it's a perfectly satisfying read even as it opens the door to a sequel. The codes and puzzles Stuart must solve may appeal to a different sort of reader than the usual fantasy fan, giving the story a broader, more unusual appeal. Touches of steampunk, Oz, and Edward Eager: I think you'll like this one!

Thank you. I have been in the reading doldrums, looking for something that appealed to me. This does. I am buying it!

Bookkm--Oh, enjoy! I do wish it were longer, but then, it's a tidily well-told tale.

I have posted your very nice review on my Pinterest site: Children's Book World. Thank you. Bob Brooks

Oh, this does sound good! Your comparison to Hugo sold me--it's going on my list.

I bought this book for my 8 yr old son based on your review and the reviews on Amazon. So glad that I did! He devoured it and can't wait for the next book in the series. Interesting - and confusing - that they decided to change the book names in this series for the US market.

Ruth--Well, it's quite different from Hugo, but I do like the mechanisms mixed with magic!