A Review of Spy School by Stuart Gibbs

A geeky boy goes to spy school, thinking his dreams are coming true, only to find out he got in for all the wrong reasons. And his insta-crush? Well, picture James Bond having a daughter who's just as kick-butt as he is, or more. In this case, James Bond is Alexander Hale, who recruits 12-year-old Ben Ripley to go to spy school, basically sweeping him off his feet with weapons and swashbuckliness. 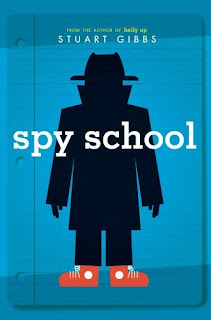 Then Ben gets to the Academy of Espionage and is stunned to find himself in the middle of an attack. An older girl named Erica helps him make his way into the building and upstairs, with Ben fumbling every step of the way. Turns out this was all a test, and he didn't do so well.

Which meant I was now flanked by six heavily armed me in total darkness.

So I did the only other thing I could think of: I prepared to surrender.

I raised my hands over my head and backed against the principal's door, accidentally bumping the handle.

Apparently, I'd unlocked it.

All six flashlight beams swung toward the sound.

I slipped into the darkened office, slammed the door shut, and promptly ran right into a coffee table. It cut me off at the knees, and I face-planted on the carpet.

The lights snapped on again.

I reflexively tucked myself into a ball and yelled, "Please don't kill me! I don't know anything! I just started here today!"

"Begging for mercy?" said a disappointed voice. "That's D-quality performance for sure."

There were murmurs of assent.

I slowly lifted my eyes from the deep-pile carpet. Instead of a horde of assassins facing me, I found myself facing a conference table.

Ben continues to bumble his way through being a student at the academy, where everyone else seems to be equal parts super-athlete and genius. So why is he the target of a real assassin? Why does his file say he has mad skills and is working on a special project?

To Ben's surprise, Erica continues to help him out, as does his new friend, the cynical Murray Hill. Erica is the best spy student in the school. Her attention to Ben makes the other kids believe he must be secretly superior, which leads to some funny assumptions and situations. The humor really makes this book a kick to read—particularly the satire about fictional spies and extra-special, gifted students in books like this one.

Ben is a pleasantly flawed and determined main character. As he plays detective with Erica's assistance, he starts catching glimpses of what might really be going on. Ben may not have the makings of a cinematic superspy, but he's a pretty smart kid, especially when it comes to math.

I do wish Gibbs had found a few more ways of using Ben's math abilities, although I understand Ben is simply trying to survive for most of the book. But eventually the pieces of the puzzle start coming together. Ben is both disillusioned and heartened to find out the truth about spy school, his own role there, and the villainous plot he's determined to stop. A cool summer read for upper middle grade and middle schoolers with both boy and girl appeal. Also—I'm guessing—the start of a very fun new series.