A Review of Knights of the Hill Country by Tim Tharp 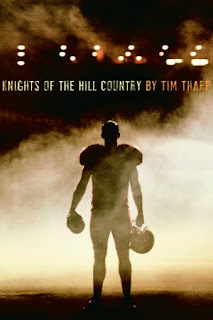 I reviewed this book a few years ago on Amazon, and thinking about D.J. Schwenk (see review above) reminded me how much I like Hampton Green, a small-town football player who also has trouble expressing himself. Like D.J., Hampton must learn to believe in himself. And like D.J., he has a strong narrative voice. Here is a revised version of my earlier review:

Hampton Green's voice gives a whole new meaning to that overused expression, "pitch-perfect." I was wondering this morning if I had been a little too harsh in a couple of recent reviews, and then I read this book and felt justified by the difference in quality! Talk about a dimensional character—teenage football player Hampton is such a real and unique person, his voice colored by a regional tone that simply adds to the storytelling.

This is how the book begins:

I done it. I stopped time.
Every single player on that football field locked up stiff as them wax figures they got over in the Pawtuska Wild West Wax Museum. Made quite a picture, the stadium lights blazing overhead like fractured stars and the football froze slick and hard as a rocket against the night sky, our outside linebacker's fingers stretching just an inch too short to do a thing but let it fly over. I had to admit it was a thing of pure beauty, that pass, even if it was the enemy quarterback that thrown it. Tight spiral. Perfect arc. That boy had talent. But, sorry to say, it wasn't going to be enough. Not with me freezing time like I could.
Course, time didn't really stop. I didn't wave no magic wand or poof out a cloud of fairy dust or crank up some science-fiction machine with spinning gears and flashing lights on it. Thing was, I'd focus so hard that I'd squinch everything down so it seemed like time froze just long enough for me to look and see what I'd have to do next. That was my talent, the one and only thing I knew how to do better than anyone else around.

Hampton plays football on a virtually unbeatable high school team because his best friend Blaine and Blaine's father have taught him to play hard and well. Over the years, Hampton has relied heavily on those relationships, with his own father gone and his mother largely unavailable. But during Hampton's senior year, he finds himself becoming aware of a disconnect between his vision of the world and Blaine's outlook on life. Hampton thinks of himself as slow, but he's starting to realize that it's not because he's stupid; instead, he mulls things over. Unlike Blaine, Hampton has trouble putting his thoughts into words on the spot.

Hampton gradually becomes disillusioned with being a follower, particularly Blaine's follower. The fact that Hampton has turned out to be a very good football player, while Blaine is held back by an untreated knee injury, is one reason for the conflict—a frustrated and envious Blaine puts a strain on Hampton's straightforward loyalty with his increasingly irrational demands. Among other things, Blaine tries to put a stop to Hampton's interest in a girl Blaine feels isn't sufficiently popular and good-looking. But Hampton's relationship with Sara helps him think in new ways and break Blaine's hold over him. Hampton wisely realizes that he can love football and play to win without neglecting other possibilities and joys in life.

All of this growth is shown in the context of Hampton and Blaine's activities at school, on dates, and especially during football games. The sports scenes are especially well written, given greater meaning by Hampton's take on the game. (I like how Hampton ruefully contrasts his ability to make exactly the right moves in football with his inability to say the right things in social settings.)

The book's pivotal moment shows Hampton, moved by his deep loyalty to his friend, doing something that infuriates Blaine even as it saves him from himself. In a very satisfying evolution, seemingly passive Hampton becomes the action-taker—and we realize that his integrity has given his "still waters" choices increasing power, in contrast to Blaine's frenetically petty mistakes. I highly recommend Knights of the Hill Country. When I updated my program's library, I didn't find very many excellent sports-centered YA novels, but this one definitely earned a place on that shelf.

Today, I'm spotlighting Knights of the Hill Country only partly because it makes the perfect companion piece to Catherine Murdock's Front and Center. This book is one of those overlooked gems, and I want to bring it to your attention. Hampton Green isn't as flashy as an Alex Rider or an Edward Cullen, but spending time with him leaves you feeling a new respect for the quiet kid who in another book might have been a secondary character. In the right hands, like Catherine Murdock's and Tim Tharp's, these subtler characters leave you thoroughly entranced, rooting with everything you've got for them to win the game of life.
Posted by Kate Coombs at 2:46 PM

I loved this book, it's so much more than football. You are so right about Hamptons voice being pitch perfect. Even the dialect was spot on. I like that the author didn't feel a need to rush the novel it moved at a nice easy pace.

Oh, that's also true--"nice easy pace"! I'm glad someone else loves Hampton's story as much as I do.